in Business
Reading Time: 11min read
A A

Priscilla Ndiaye Robinson looked across the empty fields where her Southside neighborhood once thrived. “It’s all gone,” she said. “One thousand two hundred businesses and homes were lost.”

Ndiaye Robinson’s memories of childhood delights — a neighbor’s cupcakes, playing with chickens, charging up the grassy hills — are tainted by sadness and umbrage at what happened. “It broke up a loving community. It tore up families,” she recalled. 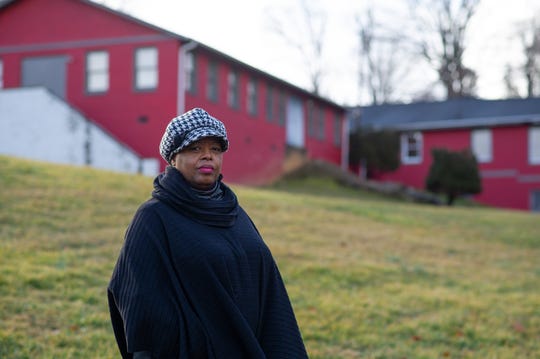 When Priscilla Ndiaye Robinson was growing up in Southside, 58% of Black families in Asheville owned their own homes, compared to 41.3% today in Buncombe County. (Photo: Courtesy of Pat Barcas/Asheville Watchdog)

For Asheville’s Black residents it — urban renewal — also undercut the foundation of generational wealth and dashed a revered piece of the American Dream. Predominantly Black neighborhoods were razed to make way for proposed highways or real estate ventures, often to the benefit of white investors.

When Ndiaye Robinson was growing up in Southside — called East Riverside under the program — 58% of Black families in Asheville owned their own homes. Today, in Buncombe County, 41.3% of Black households own their own homes, below the national average.

‘Home ownership is a big deal”

Last summer, in the heat of a national reckoning on racial injustice, both the city of Asheville and Buncombe County passed resolutions intended to begin making amends for generations of discrimination. The resolutions included a goal of increasing Black home ownership.

“Home ownership is a big deal,” Young said. “The economic gap between Black and white citizens in the country is a big deal.”

In Buncombe County today, 90.2% of all homeowners are white, compared to 3.9% for African-Americans, according to figures from the Urban Decision Group, American Community Survey and ESRI. The county’s Black population was approximately 6.3% 2019.

As a result, whites are far more likely than African Americans to profit from soaring real estate prices in Asheville and Buncombe County, and more likely to pass that wealth to subsequent generations. And because of education, income and wage disparities, Blacks are less likely to be able to afford to enter the real estate market than whites.

Beginning in the late 1950s, Asheville and other cities across the United States displaced an estimated 50,000 to 60,000 families each year — most of them Black — in what white city officials called urban renewal, but which the writer James Baldwin called “Negro removal.”

In the 1930s, the Home Owners Loan Corporation (HOLC) and the Federal Housing Authority created residential maps based on what they considered lending and investment risk. The areas of greatest risk were classified as “D” and were red, depriving residents access to mortgages and other credit, which over time resulted in the physical decline of those neighborhoods.  In Asheville, those redlined neighborhoods were predominantly Black.

These same areas, variously described as “dilapidated,” “blighted,” or “slums,” were designated for destruction by white city councils, which in Asheville’s case was motivated by a drive to make the city a premier tourism destination. 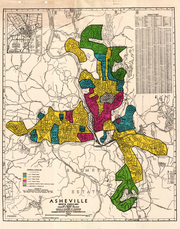 A half century later, the Housing Authority of the City of Asheville has grown to 10 public housing developments. A majority of residents in the projects are Black.

Given Asheville’s history of urban renewal, redlining, racial covenants, credit and mortgage discrimination, and systemic discrimination in employment and education, many residents in the Black community are skeptical that the reparations resolutions will accomplish much to increase Black home ownership. 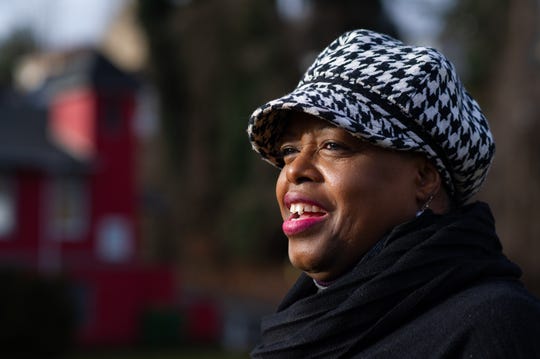 Priscilla Ndiaye Robinson is “not hopeful” that Asheville reparations will do much to increase Black home ownership. (Photo: Courtesy of Pat Barcas/Asheville Watchdog)

“I’m not hopeful,” said Ndiaye Robinson, who has researched urban renewal in Asheville’s Southside neighborhood. “Homeowners were promised another lot” in their neighborhoods, “but that never happened.”

For subscribers: Reparations snag: Why Asheville could face a funding problem

Her family rented in Southside. The city’s Housing Authority placed them in new public housing, which eased the overcrowding in their former apartment.

But instead of renewal, “it destroyed the community,” Ndiaye Robinson said. “It was an area of thriving Black-owned businesses, and you had many business owners who were teaching younger people their trades,” she said.

The Rev. Dr. Wesley Grant Sr., a civil rights activist and prominent Baptist pastor who lived in Asheville for 75 years, enumerated the losses shortly before his death in 2007.

Andrea Clark, whose photography documenting the East End neighborhood before and after urban renewal is exhibited in the Pack Memorial Library, said of the city’s pledges on reparations, “I don’t believe in them.” She said she feels that the Black community’s history is littered with broken promises.

► ‘Vital next step’ for reparations: City Council could stop sale of land from urban renewal

Clark’s father, James Howard Clark, the son of master mason James V. Miller, who built the Hopkins Chapel, the YMI building, and Mt. Zion Baptist Church among many other Asheville landmarks, lived on Valley Street in the East End. Clark grew up in Cambridge, Massachusetts, but moved to Asheville in 1968 to live with her father.

Her father’s house situated, below St. Matthias Episcopal Church, and another small plot he owned were claimed by urban renewal when he was in his 90s. He was paid $11,000 for his house plus a bit more for the land as compensation, Clark said, enabling him to buy another house just up the hill on Max Street.

In terms of passing wealth from one generation to the next, the Clarks were more fortunate than some others. Clark still owns the Max Street house and rents it.

‘They tore It all down’ 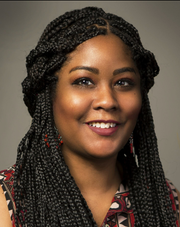 “They said they were going to make a highway there and offered my grandfather money to move,” Lee said. “Today, there is no highway there. They tore it all down, but the land is still there.”

Lee said she would love to see the city adopt a reparation plan that would give back the land it took away during urban renewal.

For subscribers: Asheville reparations: Urban renewal, a time of loss for Black community, should be quantified, historian says

Lee said her grandfather refused to move until his compensation for his house and another small piece of land he owned was enough to buy another house. In the end, he was able to buy a house on East Chestnut Street in the Montford neighborhood just north of downtown, which had a significant Black population at that time.

The family of Reginald Robinson, a local sports official, had a similar story.  Robinson said his mother lost her home to urban renewal in the East End, and with her compensation bought a house on Tacoma Circle in Montford, where his grandmother lived in her own home.

Today, Robinson said he cannot afford a home, so he rents an apartment.

“My grandmother bought her house, and she worked in a factory,” Robinson said. “She could do that then.” He said he believes that would be impossible today given wages compared to high home prices in the city, where the median price for a house was $385,000 in the final quarter of 2020.

After Montford was declared a historic district in 1977, taxes rose, as did obligations on upkeep, Robinson said. Both his mother and grandmother had to sell their houses, victims of gentrification, he said.

The threat of gentrification

Paul D’Angelo, Asheville’s community and economic development director, said the city is attempting to address the challenge of affordable housing and to increase Black home ownership by partnering with two nonprofits, Habitat for Humanity and Mountain Housing Opportunities (MHO), using loans and down payment assistance. Both Habitat and MHO build homes in cooperation with those who want to own a home but fall below a certain income level.

Habitat typically builds 12 to 15 houses a year, although this year it is likely to be lower, according to Andy Barnett, executive director of Asheville’s Habitat. Between 30% and 45% of Habitat clients are people of color, mostly African American or biracial, he said.

Barnett said another Habitat program for repairs is key to helping people to keep their homes. In this program, which handles 50 to 60 homes a year, some 40% to 45% of the clients are African American.

“We helped a homeowner on Southside a few years ago,” Barnett said. “He inherited a home, and the property had gotten deteriorated. And he wanted to be able to keep that asset intact so he can hand it down to the next generation. We see that a lot in the repair program.”

The threat here is gentrification, Barnett said. “If people are not able to stay on top of maintenance, those are the houses that investors want to buy and flip. And that traces back to redlining and the lack of ability to access credit to make repairs.”

While Habitat’s mortgages come interest free, its portfolio belies the common misbelief that lower-income people do not repay their loans.

“We have less than 1% of our mortgage portfolio more than 90 days delinquent, and that is roughly consistent with all mortgage loans,” he said.

Priced out of Asheville

D’Angelo noted, however, that given lower prices for land, labor and materials outside the city limits, only about one-third of the 15 or so homes built by Habitat are in Asheville, and only about five of the roughly 30 built by MHO annually are in the city.

A newer avenue to assist in home ownership is the Asheville-Buncombe Community Land Trust, with over $1 million in funding from the city’s bond issue on affordable housing. It became fully operational last year. It explicitly aims to assist minority low-income homeowners by purchasing homes and then reselling those homes to buyers with a subsidy, according to Anna Zuevskaya, executive director of the trust.

Like all community land trusts, ABLCT sells the building but permanently retains ownership of the land, entering a long-term, low-cost lease with the homeowner. Zuevskaya added that lower-income families can also approach the trust for assistance in purchasing a home, though in return it would keep the land.

When the homeowner sells, the family earns the increased home value — guaranteed by the ABLCT to increase by 2.2 percent annually —”helping the family to build wealth,” Zuevskaya said. She added that the trust also plans to build homes, using a partner, on land it acquires.

Despite these nonprofit efforts, even with city assistance, the outlook for greater Black home ownership is dire. With the median sales price of homes continuing to rise, lower-income people — including most Black and minority people — have been priced out of Asheville.

The housing market “forces people into rentals,” D’Angelo said. “So, the American Dream is not going to happen.”

Asheville Watchdog is a nonprofit news team producing stories that matter to Asheville and Buncombe County. Barbara Durr is a former correspondent for The Financial Times of London. Contact her at bdurr@avlwatchdog.org.

The Milwaukee Public Museum and America’s Black Holocaust Museum Invite You to Take a Journey Through the Life of Nelson Mandela at the U.S. Debut of Mandela: The Official Exhibition

Golden Globes, Grammys still don’t get it – The Famuan

Our ‘favorite pastime’ should unify, not divide

The history of NYC landmarks revealed in new book

“We Are Each Other’s Harvest: Celebrating African American Farmers, Land, and Legacy”