‘He’s kind of an ink blot’: how the far-right fell in line behind Donald Trump

in Technology
Reading Time: 12min read
A A

Five years ago, Kathleen Blee, a sociologist at the University of Pittsburgh, was interviewing former white supremacists and discovered something unexpected: unprompted, many of her subjects would bring up Donald Trump, who had just embarked on an outsider campaign for the White House.

“It was just striking to me,” recalled Prof Blee, who has been researching racist movements for so long that she interviewed women Ku Klux Klan members from the 1920s for a book on the subject.

Decades of experience taught her that white supremacists tend to abhor electoral politics, which they view as a feature of the corrupt world they wish to overturn. And yet, Prof Blee found, “people were saying sort of cautiously interested things about the Trump campaign”.

It was an early indication of how an extremist movement that had long operated at the margins was coming to view Mr Trump, a wealthy property developer from New York, as a promising bridge into mainstream politics.

Last week’s insurrection at the US Capitol, in which a mob inspired by Mr Trump’s lies about a stolen election ransacked the seat of American democracy, was a stunning declaration of their strength after five years of increasingly brazen displays, from the torchlight march in Charlottesville, Virginia, to the overrunning of the Michigan state capitol.

The insurrectionists at the Capitol were a motley crew. Their ranks included a man waving a Confederate battle flag in the halls of Congress, a QAnon shaman sporting animal horns, anti-government militia members wearing tactical gear, white supremacists and alt-right agitators. Among their dead was Ashli Babbitt, an air force veteran with legal troubles who wrote on Twitter the day before she died: “Nothing will stop us . . . They can try and try and try but the storm is here and it is descending upon DC!”

Conspiracy theories and white supremacy are deeply ingrained in US history and culture. What is unique is how those distinct elements found a unifying beacon in Mr Trump and coalesced into a movement under his administration, according to Peter Simi, a professor at Chapman University, who has sometimes collaborated with Prof Blee.

“That’s one of the things that’s most threatening about his rise to power,” Prof Simi said. “He’s kind of an ink blot of sorts where a lot of these different segments of the far-right — and into the mainstream — are able to project on to him their hopes and fears and anxieties and frustrations.”

The threat posed by such groups has unnerved the nation and prompted extraordinary security precautions for the January 20 inauguration of President-elect Joseph Biden, the man who defeated Mr Trump in the November election. Some 20,000 National Guard troops have been mobilised to protect Washington.

When you talk to these people, their policy views are all over the place. But what unites them is a hatred of the establishment

The hope that the fever will break after Mr Trump leaves office may be naive, according to experts. If Trump supporters believe, as many erroneously do, that the election was stolen, and their country is at risk, then they may deem violence not merely a justifiable response but a necessary one, they say.

Meanwhile, the very scale of the Capitol insurrection — which extremists are celebrating online — creates its own energy. “These mass mobilisations are likely to create spin-offs where one or a few people will be further radicalised by their involvement in the insurrection,” Prof Simi predicted. “It really makes them feel part of something bigger than themselves, and then they go out by themselves to try to further the cause.”

Throughout his presidency, Mr Trump has emphasised the threat of violence from Islamist terrorist groups and leftwing “Antifa” radicals. Yet the Department of Homeland Security concluded in October that “racially and ethnically motivated violent extremists — specifically white supremacist extremists” — are the “most persistent and lethal threat in the homeland”.

The Center for Strategic and International Studies, a think-tank, said in a June study that “far-right terrorism has significantly outpaced terrorism from other types of perpetrators”, and that the number of rightwing attacks had “grown significantly in the last six years”.

The CSIS found that rightwing groups accounted for two-thirds of all attacks in 2019 and more than 90 per cent between January 1 and May 8 of 2020. “It’s emphatically true that there has been a rise in the number of rightwing plots and attacks,” said Seth Jones, an author of the report who has advised the FBI.

While rightwing violence has long existed in the US, Prof Blee and other experts see strands linking today’s actors to the self-declared “patriot” militias that came to prominence in the 1990s. Many were motivated by anti-government rancour and staunch opposition to gun control. Some of their ranks were filled by victims of the 1980s farms crisis, which pushed many families into bankruptcy and prompted a search for culprits — bankers, Jews and the federal government, among them.

In April 1995, Timothy McVeigh, a former soldier who had become radicalised by The Turner Diaries, a far-right pulp novel about a post-apocalyptic America that descends into race war, parked a rented truck loaded with fertiliser and diesel fuel in front of the federal building in Oklahoma City. The blast he detonated killed 168 people in the worst act of domestic terrorism on US soil.

The next year a pipe bomb planted at the Atlanta Olympics killed one but might have done worse damage if it had been better orchestrated. It was set by Eric Rudolph, a follower of the white supremacist Christian Identity movement.

After the Oklahoma City bombing, the movement seemed to wane as law enforcement cracked down. The hard core went underground — and online. “White supremacists have been early adopters of technology,” Prof Blee said, from online bulletin boards to encrypted messaging apps.

They gained more latitude to operate after the September 11 attacks as authorities shifted focus to foreign terrorists. Then they staged a resurgence after 2008 brought an epochal financial crisis and the election of Barack Obama, America’s first black president, both of which stirred extremists who believed white people were being “replaced”.

By 2009, the Oath Keepers, a far-right group that focuses its recruitment on former members of the military and the police, had come into being. Other groups, such as The Base, self-consciously mimicked the social media strategies of Islamist extremists to reach broader audiences.

“That’s kind of a turning point where they start to get connected with people who wouldn’t see themselves as extremists but are open to racist appeal,” Prof Blee said. “It’s like the beginning of the connection to electoral politics.”

Daryl Johnson, a counter-terrorism expert at the Department of Homeland Security, had warned on the potential for renewed rightwing violence in an April 2009 report. But its publication provoked a firestorm of criticism from conservatives. Michelle Malkin, a Fox News contributor, called it a “piece of crap”, and John Boehner, then the Republican leader in the House of Representatives, demanded its retraction.

Mr Johnson ended up leaving the DHS and his unit was dismantled. “We now have a huge intelligence gap for the last 10 years as this movement has continued to grow and grow,” he lamented in his 2019 book, Hateland: A Long Hard Look at America’s Extremist Heart.

Mr Trump became important to the movement even before his candidacy as he emerged as a leading proponent of the “birther” conspiracy theory, which falsely held that Mr Obama had not been born in the US and therefore could not be president. While birthers argue their view is not inherently racist, the internet memes it has spawned — of Mr Obama in African garb, carrying a spear, eating watermelon — suggest otherwise.

“He becomes the face of the very worldview that says, ‘Obama’s not our president — he’s not fit to be in the White House’,” Prof Simi said.

Then, when Mr Trump descended the escalator at Trump Tower in June 2015 to declare his candidacy, he called Mexicans rapists and promised to build a wall on the southern border — an idea long championed by David Duke, the prominent Klan leader.

Debating whether Mr Trump and his advisers are full-blown white supremacists or nationalists or merely proponents of a rigid immigration policy is almost beside the point, say scholars.

“Regardless of trying to parse out Trump’s words, white supremacists are very clearly hearing something when they listen to his statements,” Prof Simi said.

In August 2017, eight months after Mr Trump delivered a dystopian inauguration speech declaiming “American carnage”, thousands of white supremacists came together for the Unite the Right rally in Charlottesville, Virginia, that, as a public display of strength and violence, now looks like a precursor to the Capitol insurrection.

Torch-bearing extremists chanted against African-Americans and Jews and vandalised a synagogue. A young woman counter-protester was killed. Prof Blee described it as a “coming-out-of-hiding” — a spectacle “to show that this far-right or white supremacist world really exists and really has power and can command space”.

In the aftermath, Mr Trump condemned bigotry and hatred. But he also declared that there were “very fine people on both sides” at Charlottesville.

That same mish-mash of extremists would re-emerge at heavily armed protests against coronavirus lockdowns in Lansing, Michigan and other state capitols last year. Mr Trump cheered them on from the sidelines, tweeting: “LIBERATE MICHIGAN!”

In October, members of one militia group, the Wolverine Watchmen, were arrested for plotting to kidnap Michigan’s Democratic governor, Gretchen Whitmer, and overthrow the state government. Their members boasted criminal records and loose affiliation with a jumble of racist causes and conspiracy theories.

Joseph Uscinski, a political scientist at the University of Miami who has written extensively on conspiracy theorists, says it is mistaken to try to categorise their adherents as “left” or “right” on the traditional political spectrum. A case in point, he said, is the QAnon conspiracy, which posits that a deep state of Satan-worshipping paedophiles is battling Mr Trump.

“When you talk to these people, their policy views are all over the place. But what unites them is a hatred of the establishment,” he said. 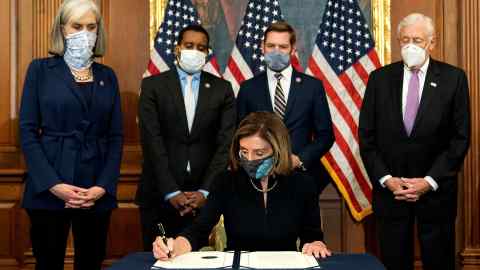 Mr Trump’s role, experts say, was not to create such people but to bring them into a political project. “Their allegiance is to him,” Prof Uscinski explained. “Trump didn’t run and say, ‘I’m a good Republican.’ He said, ‘the entire system is a swamp and I’m going to drain it.’”

Now that they have been allowed into the mainstream, such forces will not be easily pressed back to the margins. Out of office, Mr Trump might continue to push his claims of a stolen election. Many of his tens of millions of supporters may view a President Biden as illegitimate. Some could see him as a legitimate target of violence.

In the meantime, Prof Blee said, an array of white supremacists and far-right extremists were rejoicing online at their ability to make common cause and bring violence to the Capitol.

“Whether they have a retreat back into separate movements or networks, or whether this becomes a really blurry terrain of reinforcing rage — I think we’re going to find out in the next couple months,” she said.

Harriet Tubman Inducted into Military Intelligence Corps Hall of Fame; Back on Track to Grace the $20 Bill – Good Black News

Faced with rising crime and social upheaval, more Black Chicagoans are seeking out firearms for their own protection | National

The Chronicle of the Horse