‘Magic’ Johnson leads Shop Talk event to get out the vote for Biden, Harris

Detroit — Five guys sat outside a barbershop on the city’s east side Saturday talking politics.

Among them: A former NBA superstar-turned-businessman, the second-highest ranking elected official in Michigan, and the top law enforcement official in the state’s largest county.

“The reason I’m here is to tell young Black men they can’t sit on the sidelines; you have to bring about change with your voice and your vote,” said Johnson, a Lansing native and former Los Angeles Laker star who retired and built a business empire that includes investments in restaurants and movie theaters.

Saturday’s event was part of Biden’s “Shop Talk” program, which are recurring “round table” discussions about issues that impact African Americans. After Johnson appeared in the Detroit event Saturday, he said he was headed to Lansing to help mobilize voters.

“We need Joe Biden. We need Kamala Harris,” said Johnson. “It can change our community and our lives to have someone who cares about the same things we care about … voting for them will bring the country together, because it’s so divided right now.”

Gilchrist said every vote counts, pointing out that President Donald Trump won Michigan in the 2016 election by a little over 10,000 votes.

“Then, when (Gov. Gretchen Whitmer) and I appeared on the ticket, Detroit showed up to vote, and we flipped that 10,000 votes and made history, and you sent a Black man from the east side to become the highest-ranking Black person in Michigan history,” Gilchrist said. 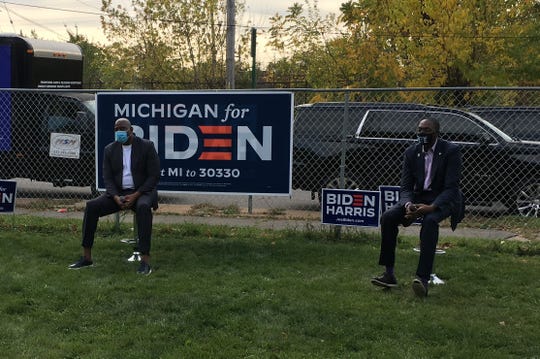 “When I first started at DPD in 1975, the department was only 10% African American,” he said. “I ended up being in charge. That’s because of the voters who elected Coleman Young, who changed the police department. Your vote matters. If you don’t get a seat at the table, you’re on the menu.”

Brent said people who want to effect change must do more than protest.

“Protest without policy is pure performance,” he said. “The reason I vote is to improve policy, and improved policies affect my life, especially as a Black man.”

About 70 people attended the event, including about a dozen Wayne County Sheriff’s Office deputies who provided security and traffic control. Napoleon said they volunteered to police the gathering.

“Nobody was paid,” he said.

Richard Smith, who said he lives on Cadillac down the street from the barbershop, asked the group: “How do we recover from coronavirus and systemic racism?”

Gilchrist replied: “The depth of destruction is the result of Trump’s policy failure. One of the things we did was to take it seriously. Michigan, like no other state, has responded to how this virus has affected people of color. If I was not lieutenant governor, we’d not be prioritizing people of color as it relates to COVID.”

Netta Johnson, whose father Ray Field opened the barbershop in 1967, shortly before the riot started in July, said some problems have persisted for decades.

“I’m told my dad sat on the roof (of the barbershop) all night to protect it from the looters, and it was one of the businesses that wasn’t touched,” Johnson said. “The same things we were fighting for back then, we’re still fighting for now.”

Medcalf: To be Black in Minnesota is to constantly barter for acceptance

Why Ohio State is hosting an HBCU football classic

5 Black business leaders on reparations and the racial wealth gap

5 Black business leaders on reparations and the racial wealth gap

EDITORIAL: Praise the MVP; pass up the politics | Editorials

A tale of Twin Cities: The danger lurking behind ‘defund the police’ demands in the US