Players Alliance shows up in record numbers in Phoenix

PHOENIX — Major League veteran Edwin Jackson looked around the parking lot Wednesday at Pilgrim Rest Baptist Church, saw the stream of players coming out of their cars to support the cause, and got emotional seeing the outpouring of love.

It was the next-to-last stop of the Players Alliance, a group of current and former Black players focused to create opportunities and equality in baseball and communities across the country, and it morphed into a virtual Who’s Who of baseball.

“Will you look at this?’’ said Jackson, a founding member of the Alliance. “Look at this. It’s beautiful. Look at all the player involvement. This has become bigger than all of us.’’

There were about 50 current and former players on hand. You had MVPs like Cody Bellinger of the Los Angeles Dodgers. Gold Glove winners like former seven-time winner Devon White. Twenty-game winners like David Price and Dontrelle Willis. World Series stars like Howie Kendrick. All-Stars like Adam Jones and Justin Upton. Up-and-coming stars like Jo Adell of the Los Angeles Angels and Cole Tucker of the Pittsburgh Pirates with younger brother Carson Tucker of Cleveland. Former players like Royce Clayton, Junior Spivey, Kenny Felder, Jamie Brewington and Rod Allen. Team executives and scouts like De Jon Watson of Washington, Philip Stringer of the Dodgers, and Josh Barfield and Kristyn Pierce of the Arizona Diamondbacks. 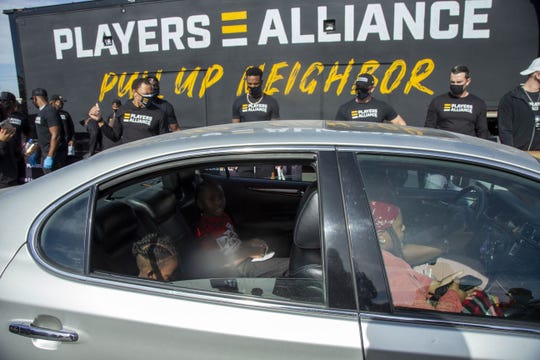 Local residents sit in their car while the Players Alliance and Pull Up Neighbor distributed fresh produce and athletic goods during a pop-up food pantry outside Pilgrim Rest Baptist Church in Phoenix on Jan. 13, 2021. (Photo: Nick Oza)

The Players Alliance was formed following the Minneapolis police killing of George Floyd last May, and became a groundswell when Jacob Blake was shot by Milwaukee police in August. A group of players sat out games in protest of the injustice and donated their game checks to the Black Lives Matter movement. It raised $1 million with Major League Baseball matching it, while providing another $1 million worth of baseball equipment.

There has now been $41.7 million, including a $10 million grant from MLB, given to Black communities through the Alliance.

“I feel like every single year in spring training and throughout the year,’’ said Price, a 12-year veteran, “we ask what can baseball do to reach out to the African-American community. I never had the answer to it. Then, this came along.

“I think this is a big start to give everyone the supplies that they need to play baseball and to raise awareness of African Americans in baseball. Its huge because it’s not the way it used to be in the game of baseball. I grew up watching the (Atlanta) Braves in the ‘90s. There were a ton of their players who looked just like me, and that’s why I fell in love with the game.

“Now, to see these guys come out here, with all of their aspirations, it’s making a difference.”

Yet, the Players Alliance is hardly just about baseball. It’s about making a difference in the predominantly Black communities throughout the country, taking an active role.

Their mission statement: “To create an inclusive culture within baseball and the community, where differences are leveraged to elevate racial equality and provide greater opportunities for the Black community, both in our game and the places we live in, play in, and care most about.’’

This is why Adam Jones felt it was important to be there Wednesday, spending two hours handing out food, masks and hygiene products, along with baseball equipment, despite a scheduled 12-hour flight to Japan the next day.

And this is why white players, such as Evan Longoria of the San Francisco Giants, Daniel Hudson of the Nationals and free-agent outfielder Kevin Pillar were on hand, too, showing support for their peers and fellow teammates.

“I knew I wanted to be part of this when they came to Phoenix,’’ said Hudson, who recorded the last out of the 2019 World Series. “I’m proud to be part of it. I figured there would be a good turnout for this, but I didn’t exact this.’’

It was easily the largest group of players that donated their time at the Pull Up Neighbor Tour, which turned out be the next-to-final stop. There were seven more stops scheduled on the 33-city tour throughout California, ending up in former pitching star CC Sabathia’s hometown of Vallejo, California, but with a stay-at-home order in California the tour ends Thursday in Las Vegas.

“It was important for all of us to be here,’’ said Cole Tucker, “because we know what it means. To be one of the young guys on the way up, its pretty awesome just to be a small part of this alliance. To see it start from a discussion in a group chat room to this, it’s pretty amazing.

“It makes you proud to be part of something that means so much to these communities.

“I can’t wait to see how this grows even bigger.’’

Being Indian American today: Kamala Harris as vice president is a huge step forward in our national journey

Ben Montgomery and Frederick Gooding will take part in virtual talks at the Topeka library.

Cal State Fullerton’s Maya Riddlesprigger leaves her comfort zone, finds herself – on and off the court – Orange County Register

US President-elect Joe Biden ropes in 20 Indian-Americans in his administration, 17 at key WH positions

Biden Ropes In 20 Indian-Americans In His Administration, 17 At Key WH Positions

NFL proves once again that Rooney Rule is a joke