A Golfer’s Dream Delayed, But Finally Realized At The Game’s Highest Level : NPR

Kamaiu Johnson practices ahead of his PGA Tour debut on Thursday at legendary Pebble Beach. Johnson, 27, was discovered by a golf pro at age 13 after he had dropped out of school. 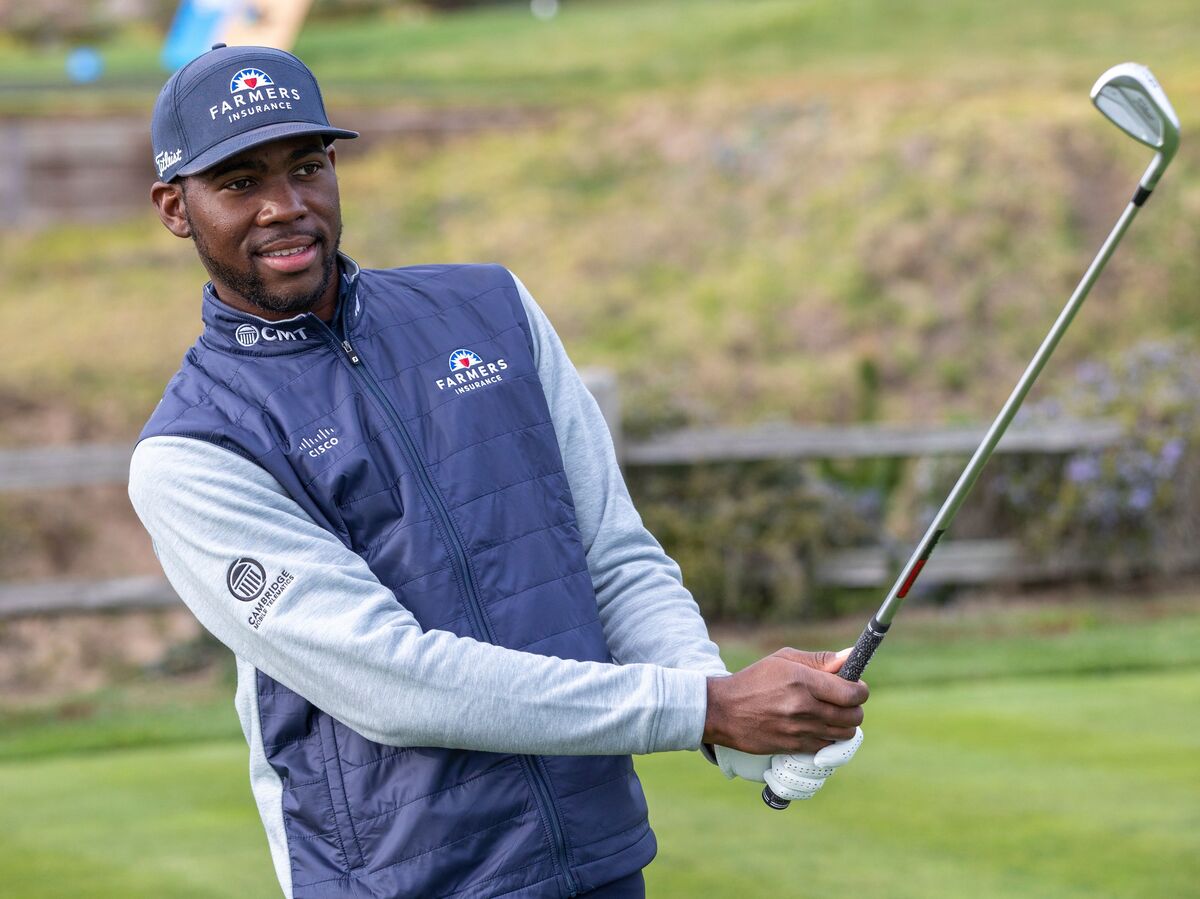 Kamaiu Johnson practices ahead of his PGA Tour debut on Thursday at legendary Pebble Beach. Johnson, 27, was discovered by a golf pro at age 13 after he had dropped out of school.

When Tiger Woods conquered the golf world a couple of decades ago, it spurred a wave of minority participation in a game historically closed to people of color.

But some are making inroads, including African American golfer Kamaiu Johnson.

When the 27-year-old tees off on Thursday, in the first round of the AT&T Pebble Beach Pro-Am, it’ll mark his debut on the PGA Tour.

And the culmination of an improbable journey.

A beam of light

It began when he was 13-years-old, the day he met Jan Auger.

On that day in 2007, Auger was playing golf with friends at Hilaman Golf Course in Tallahassee, Fla. She was an assistant golf professional there. The fourth hole ran by the apartment complex where Kamaiu Johnson (pronounced: kuh-MY-yah) lived with his family. As Auger’s group played the fourth, Johnson was outside watching, mimicking swings with what Auger thought was a golf club. 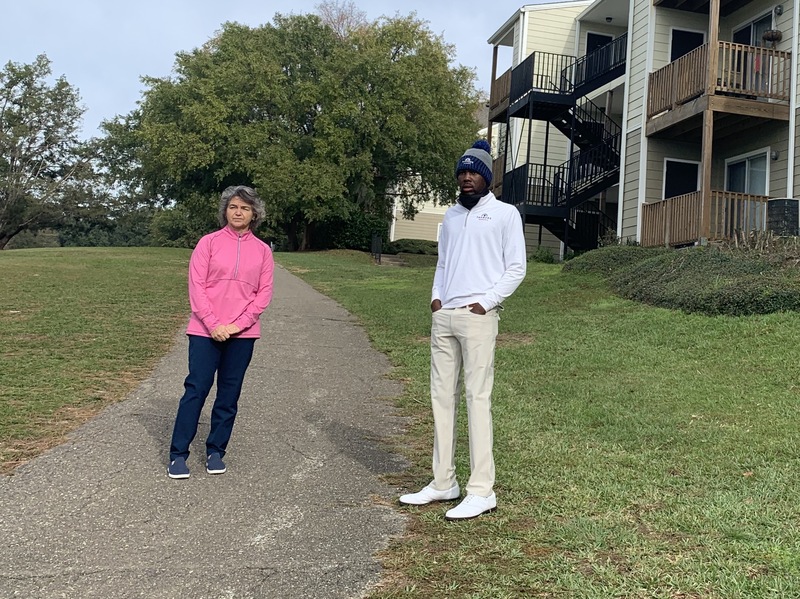 It was here, back in 2007, when Jan Auger first saw Kamaiu Johnson outside his apartment in Tallahassee, Fla. He was outside swinging a stick as a golf club. His swing was ‘smooth and natural’. 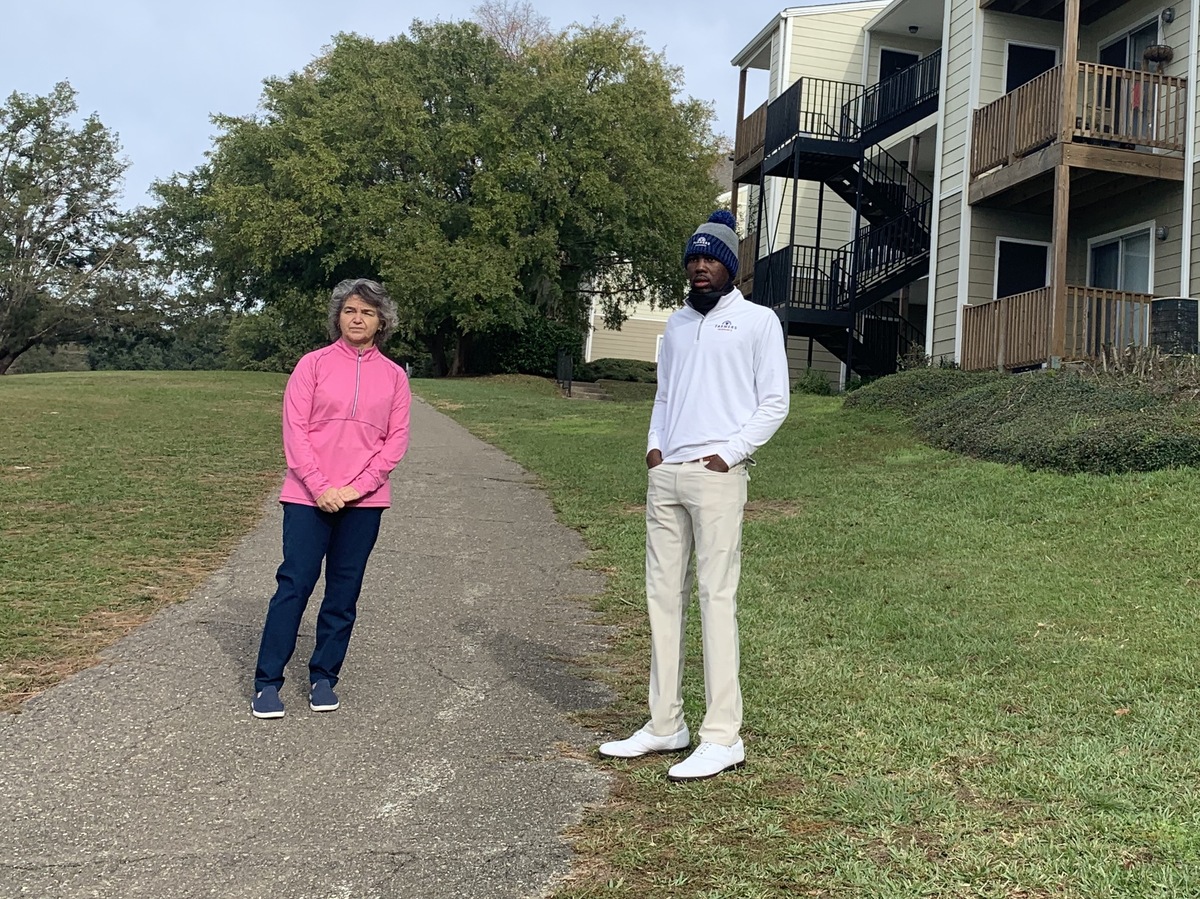 It was here, back in 2007, when Jan Auger first saw Kamaiu Johnson outside his apartment in Tallahassee, Fla. He was outside swinging a stick as a golf club. His swing was ‘smooth and natural’.

His swing was smooth and natural, helped by years of playing baseball.

“When you’re around golf,” Auger said, “you notice people who have a fluid swing. Not mechanical. And as I got closer, I realized that he wasn’t swinging a golf club. It was just a stick.”

It was a school day and she asked Johnson why he wasn’t in class. He lied and said he was home schooled. In fact, he had dropped out. He wasn’t a good student. He didn’t test well and was put in “exceptionally slow learning” classes, separated from friends. He got picked on a lot.

“I was so lost in life,” Johnson said. “So depressed at a young age.”

His father was “out of the picture,” but it was a loving family. And poor. As many as ten family members lived in the cramped, two-bedroom apartment bordering the golf course.

One of the things Johnson missed most in that small living space, was space.

“We had these long table cloths,” Johnson remembered, “that used to just drop all the way down to the floor from the kitchen table. I used to sleep under [the table] ’cause that was privacy.”

Golf, an expensive often exclusive sport, was not part of his world.

“I was aware of Tiger,” he said, “but not really aware because there was no golf being played at my house. That just wasn’t it.”

But then, on that day, Jan Auger approached this rudderless teen swinging a stick, and asked him if he wanted to hit a bucket of balls with an actual golf club.

“He did look a little sad to me when I walked up to him,” Auger said. “It was just something to brighten his day, I guess.”

Johnson described hitting the bucket of balls in an essay he wrote for The Players’ Tribune.

“I held the club in my hand and tried to figure out the best way to grip it, to swing it,” he wrote. “I won’t lie to you, I wasn’t quite a natural. It was a bit rough at first. But, man, that first day I flushed one. Just totally pure. I watched the ball float up past the trees, into the sun and back down to earth. It was perfect. And I was hooked.”

After that, an offer from Auger. If he did chores around the course, he could hit range balls for free and play for $1 a round.

A great learner and a big boost

What followed was a kaleidoscope of experiences and people that helped turn his sudden passion into skill.

The kid who failed in school (he would go on to get his GED) was, in fact, a great learner.

“When I’m around people that are better than me and smarter than me,” Johnson said, “I’m quiet. I’m listening. I’m a sponge. Trying to soak it all in. That’s another big reason why I progressed pretty fast and got better.”

Get good at chipping and putting, he was told. It’s how you lower your score. Play as many tournaments as you can, so you understand how to play under pressure. Countless Samaritans gave him money for tournament entry fees.

Johnson also got a big boost from the APGA Tour. 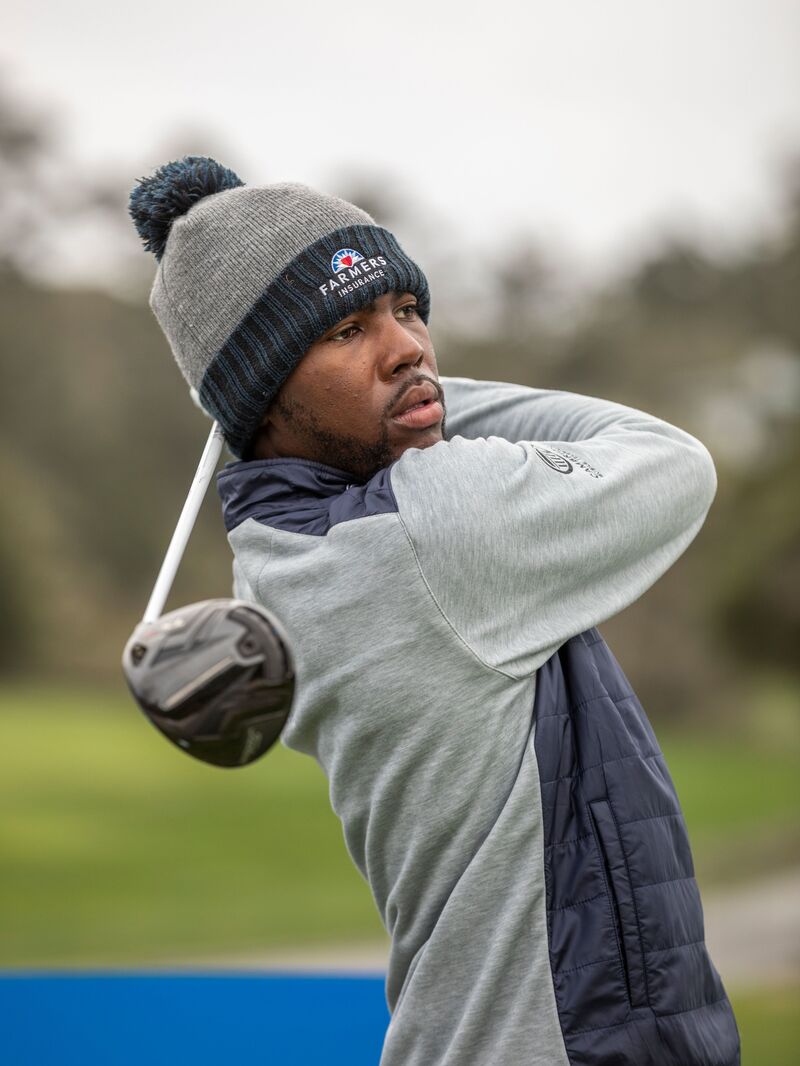 Kamaiu Johnson was ready to play in his first PGA Tour event last month. But he tested positive for the coronavirus and wasn’t sure when he’d get the chance to play on the Tour again. 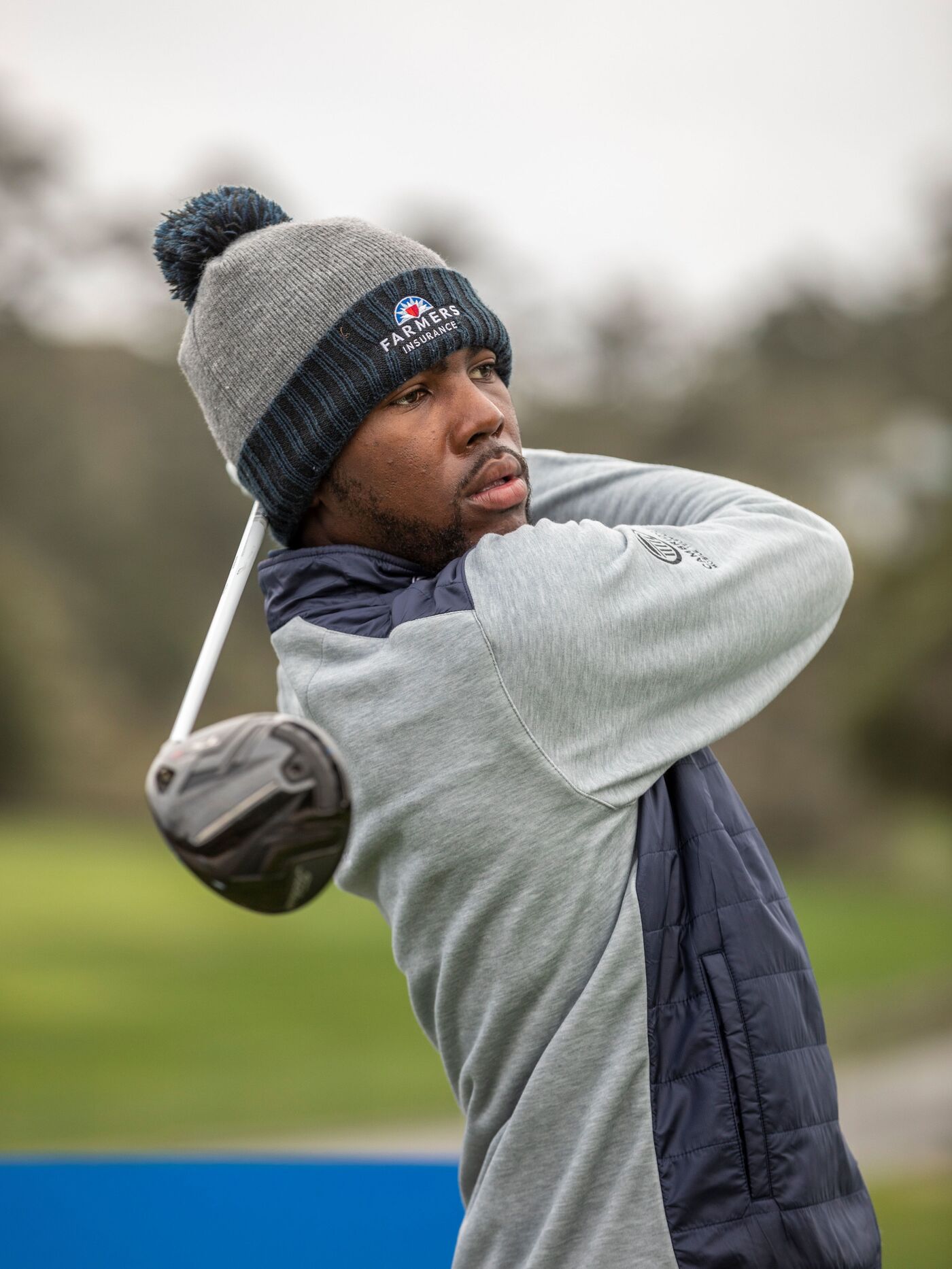 Kamaiu Johnson was ready to play in his first PGA Tour event last month. But he tested positive for the coronavirus and wasn’t sure when he’d get the chance to play on the Tour again.

The Advocates Pro Golf Association Tour was created in 2010 “to prepare African Americans and other minority golfers to compete and win at the highest level of professional golf.”

“I think a lot of people felt like there would be a flood of African Americans going to the PGA Tour because of Tiger,” said Ken Bentley, CEO of the APGA Tour. “Now I think Tiger got a lot of people into the game. You saw a resurgence in Black college golf. But there was a void after they left college.”

Without the financial support they had in school, many Black players lacked access to top equipment and training and coaching.

The APGA has tried to fill that void by starting to fit players for clubs, get them more access to technology and top coaching.

Dazed by an invitation

A month after that triumph, there was more excitement.

He got a sponsor’s exemption that landed him a spot in the Farmers Insurance Open. Johnson had reached the top – he would tee off in his first ever PGA Tour event.

The PGA video’d his reaction to the invite. Moments after getting it, he stood in a hallway, still a bit dazed. A stranger asked Johnson, who was dressed like a professional golfer, if, indeed, he was one.

“Will I see you on TV?” the person asked.

“You will actually,” said Johnson, who laughed and then said “oh man.”

But a life packed with drama would serve up more.

Late last month, a few days before his TV debut at the Farmers, Johnson was heading for a practice round when his phone rang.

“I got a call from Andy from the [PGA] Tour,” Johnson said, “as I was walking out of my room and [he] said, ‘Kamaiu you need to get back in your room quickly. You’ve tested positive for COVID.'”

My story and everything that I’ve been through is just inspiring so many people to show love.

The devastating news was made worse by the fact that several of his family members also were positive for Coronavirus. His mom and grandmother were seriously ill.

He was out of the tournament and he felt physically awful.

“Just one night but I felt really bad,” Johnson said. “I lost my taste. I had a burning nose, chapped lips, I was very fatigued, lost my [sense of] smell.”

Johnson isolated for ten days in his hotel room at the Farmers tournament. It was the longest he’d been away from golf since he started playing as a teenager.

But in the midst of his quarantine, the village that Johnson always talks about…the many people who’ve helped him along the way….helped more. Two PGA tournaments offered him a spot – the AT&T starting today and the Honda Classic next month. Two corporations, Cisco and ClubCorp, reached out to make him a brand ambassador.

“I’m sorry I’m using the word ‘incredible’ so much,” Johnson laughed, “but it was literally. Just so incredible to see the love and support.”

“I believe that just goes to everything that’s happening in our world right now. People are just so sick of the negative, they want to see positive. My story and everything that I’ve been through is just inspiring so many people to show love. Because I’m a product of love and support. Because so many people of different colors , women, men, just so many people supporting me to get to this point where I am today.”

Where is he today? 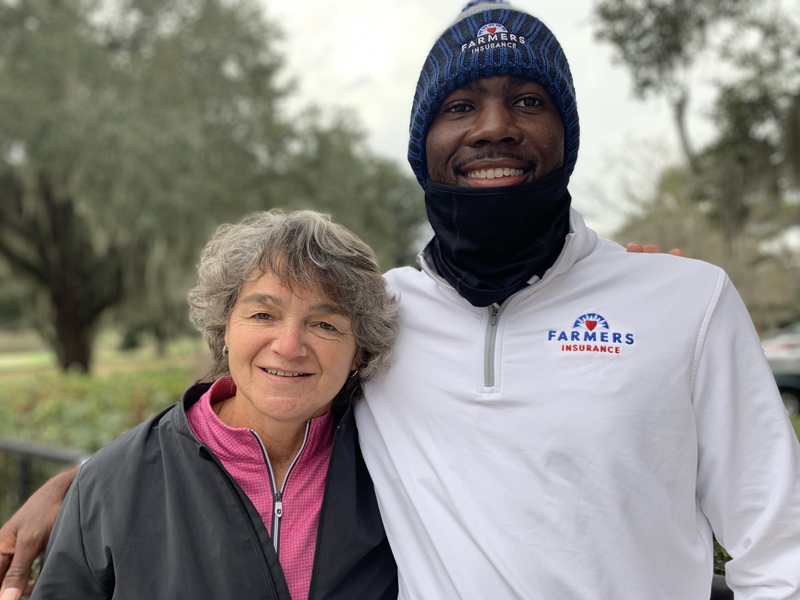 Jan Auger will be watching and cheering on as Kamaiu Johnson plays in his first PGA Tour event. 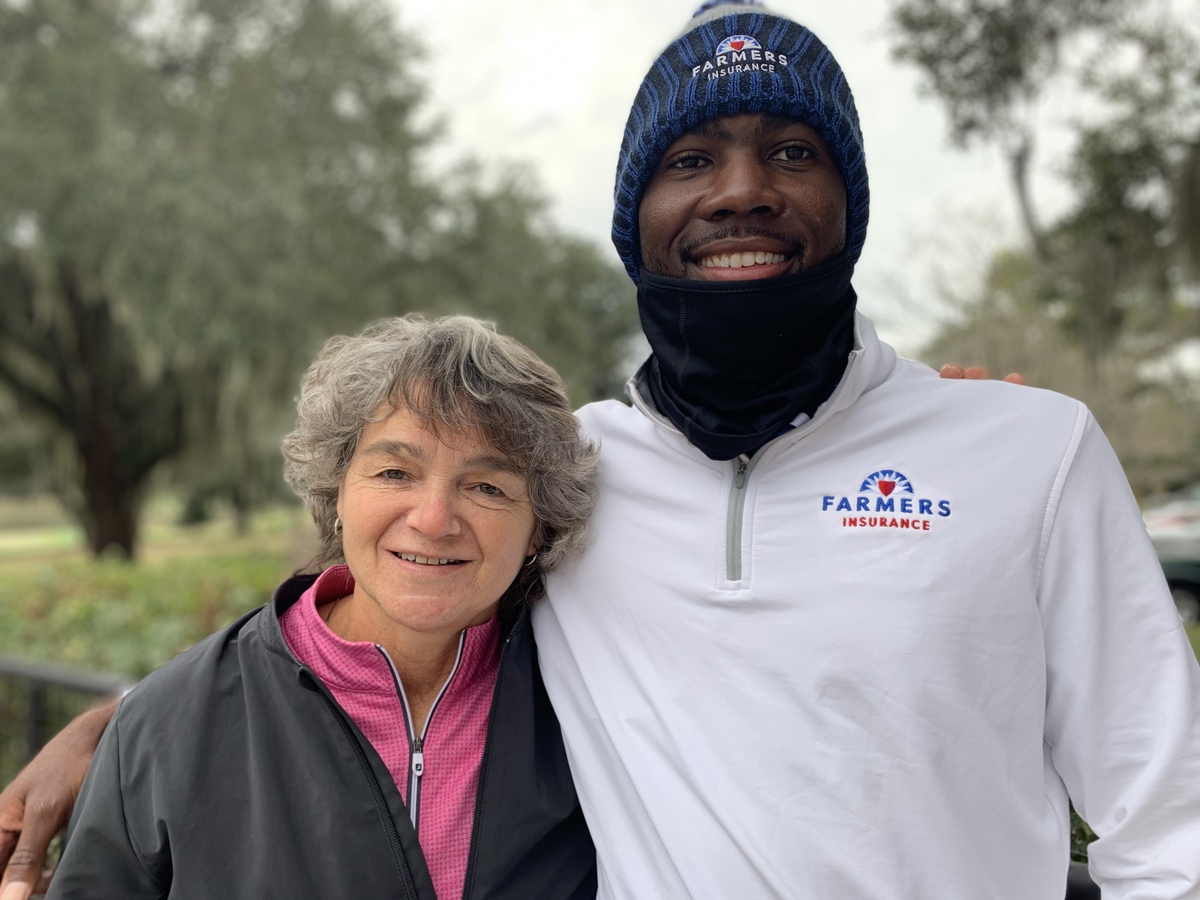 Jan Auger will be watching and cheering on as Kamaiu Johnson plays in his first PGA Tour event.

Most importantly, COVID-free, as is his family. A close second – a delayed dream but a dream nonetheless. He’s teeing off at legendary Pebble Beach.

His village will watch. Jan Auger, who Johnson calls his second mom, will tune in from Florida and “not miss a second.”

“It just kind of tears me up,” Auger said, her voice breaking. “I just want him to be proud of himself and to realize what he’s done.”

He knows. But today, Kamaiu Johnson is focused on what he wants to do.

Play well this week. And beyond.