A Joyous Vision Of ‘American Utopia’ From David Byrne And Spike Lee : NPR 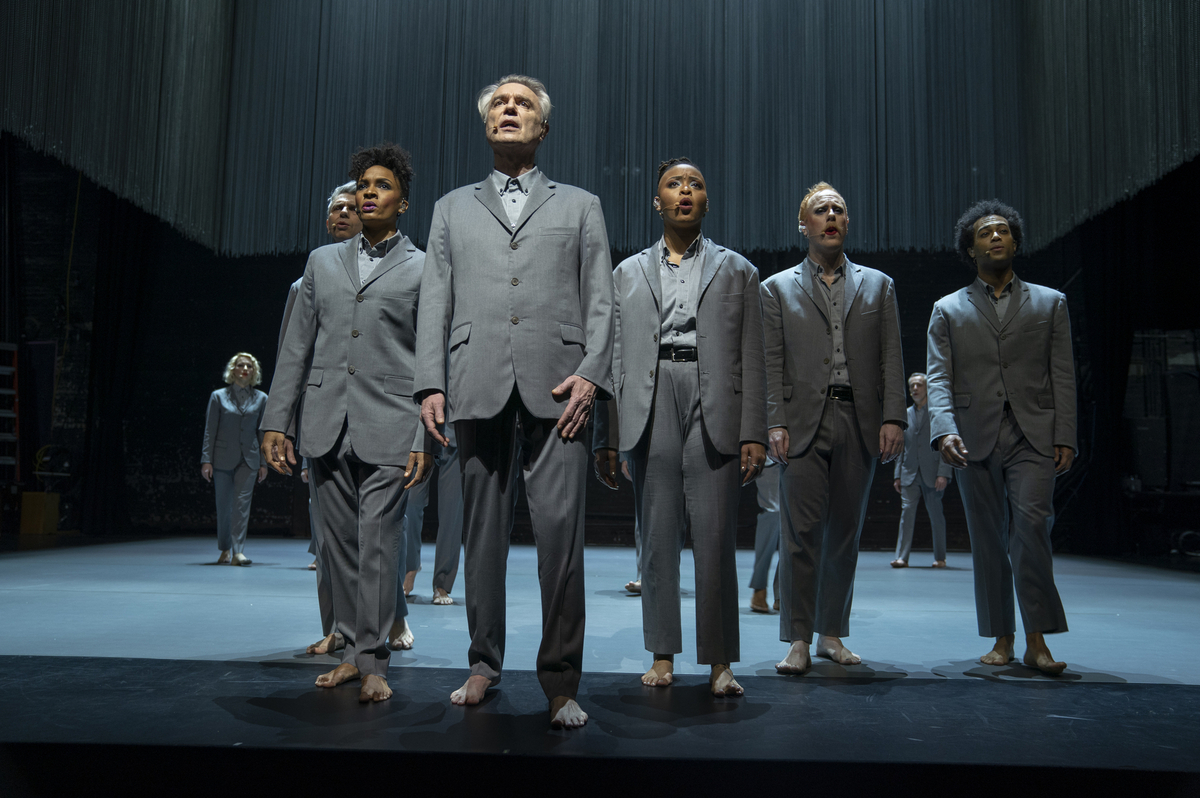 Back when the Nazis were running roughshod over his homeland, Bertolt Brecht wrote a short poem that asked, “In the dark times, will there still be singing?” And it gave a reply: “Yes, there will be singing. About the dark times.”

Of course, there are many ways of singing about darkness. One is to celebrate hope. That’s what’s on offer in HBO’s David Byrne’s American Utopia, a joyous blend of song, dance and revival meeting. The film, which captures a live performance of Byrne’s acclaimed Broadway show, was directed by Spike Lee.

Now, Spike might not be the first person you’d expect to click with Byrne, a guy I don’t exactly picture yelling courtside at a Knicks game. Yet Lee is terrific at filming live performances, and his swooping, shrewdly observant camera meshes perfectly with Byrne’s layered and rousing sense of musical theater. This is one show you can dance to.

American Utopia starts with Byrne, barefoot in a silver-gray suit, holding a model of the brain and pondering different ideas of connection. He’s gradually joined by his equally barefoot co-stars, also uniformed in silver-gray suits, who sing, dance and play hand-held instruments as they perform nearly 20 Byrne songs, from his Talking Heads classics to his more recent solo work. Thanks to wireless technology, everyone moves around the stage in seemingly total freedom.

Byrne’s work has long been obsessed with the many ways of being imprisoned — in oneself, in an addiction to things, in a meaningless life — and equally attuned to different forms of escape. American Utopia features a series of songs that ask questions about the meaning of home. The answers range from the welcoming good spirits of “Everybody’s Coming to My House” to the rowdier energies found in Talking Heads’ party song “Burning Down the House.”

In fact, the show isn’t actually about burning anything down. It’s about conjuring an image of an American utopia. You’ll be relieved to hear that Byrne is not hectoring. Yes, he gives a little speech about the need to vote — but he doesn’t say who for. And yes, Byrne points out that many of his cast members are immigrants, as is he — a naturalized American born in Scotland. Yet his vision of utopia is not any kind of political program. It’s the show itself.

For Byrne, utopia is about embracing difference. It’s about men and women from a diversity of races and cultures coming together to create something new, alive and beautiful that helps people connect. While Byrne starts alone on the stage, by the grand finale, he and his co-stars are marching through the aisles singing the cheery song “Road to Nowhere.” Everybody’s together on-screen — even the audience.

In a way, the show echoes Byrne’s own artistic transformation. Back in his early, post-punk days, he was almost a parody of the nerdy, angst-riddled white guy. With his on-stage tics and spasms, he seemed a bit like Psycho‘s Norman Bates, if Norman hadn’t turned into his dead mother but instead gone to art school. What liberated him seems to have been his encounter with Black music, both American funk and the complex rhythms of Brazil. Byrne’s persona became sunnier and more communal, as you could see in Jonathan Demme’s great 1984 concert film Stop Making Sense, where Byrne and his fellow Talking Heads exude sheer collective joy.

Now, the skeptic in me feels obliged to note one limitation of the show’s communitarian notion of utopia. Byrne writes and sings lead on all the songs — he’s obviously the star. Everybody else plays second fiddle, and while they clearly enjoy performing, I suspect being a backup is not how they view utopia.

Yet if Byrne doesn’t always rise above stardom’s privilege, he is attuned to other ways he’s privileged. He realizes that the show’s upbeat vibe could easily turn into feelgood kitsch that feels disconnected from present-day reality. He puts some political steel in the show’s spine by including a startling rendition of the Janelle Monáe protest song, “Hell You Talmbout,” whose lyrics are basically the names of African Americans who have died at police hands or from racial violence.

This powerful song is political in the way Byrne’s talk about voting is not. Yet its presence offers a necessary reminder that any utopia begins in a world that is painfully far from perfect. You can only sing yourself through the dark times if you don’t forget how dark they can be.