in Entertainment
Reading Time: 11min read
A A

*LOS ANGELES – The American Black Film Festival (ABFF) today announced its lineup of 12 spotlight screenings from its studio and network partners. The screenings include premieres and previews of feature films, documentaries and episodic series. Regarded as the preeminent showcase for quality Black content, the festival will take place live in Miami Beach June 15-19 and continues virtually June 20–30 on ABFF PLAY, https://abffplay.com/, the festival’s custom-designed online platform. 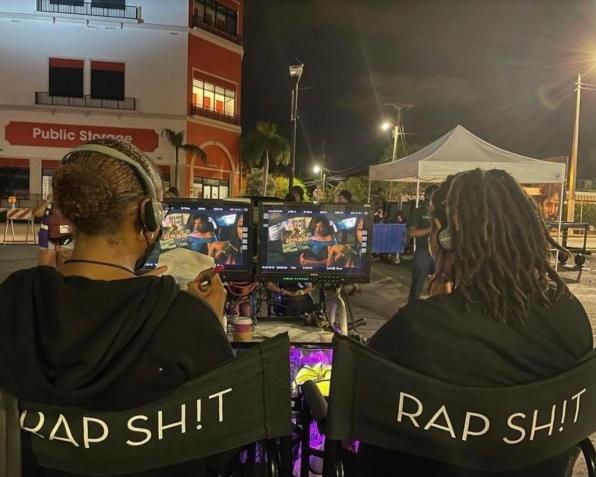 “ABFF continues to be an unparalleled resource for studios, networks and streamers to promote and publicize their upcoming releases to Black audiences. We are excited to share these films and series with this year’s attendees,” said Jeff Friday, founder and CEO ABFF Ventures LLC.

Virtual spotlight screenings to be featured on ABFF PLAY include Color Of Change’s eye-opening documentary What’s Costing Hollywood?, a mini-documentary that explores how data is often used to inform executive-level decision-making in Hollywood with a talkback moderated by Kendrick Sampson and A Beautiful Resistance from The Boston Globe. Right to Offend: The Black Comedy Revolution will have an encore presentation on the platform.

For more details on the spotlight screenings see below and visit www.abff.com for the full schedule.

Down With the King

Rap star Money Merc (Freddie Gibbs) has been sent by his manager, Paul, to a rural house in the Berkshires to focus on his next album. Disenchanted with his music career and the 24/7 upkeep that such fame entails, Merc has no desire to write or record music. Instead, he spends most of his time at his neighbor’s farm learning about farming and enjoying the simplicity of country life. After Merc abruptly announces his retirement on Twitter, Paul rushes to the countryside to lure him back into the music industry.

A League of Their Own

A League of Their Own evokes the joyful spirit of Penny Marshall’s beloved classic, while widening the lens to tell the story of an entire generation of women who dreamed of playing professional baseball. The show takes a deeper look at race and sexuality, following the journey of a whole new ensemble of characters as they carve their own paths towards the field, both in the League and outside of it.

Shamony Gibson and Amber Rose Isaac were excited mothers-to-be whose deaths due to childbirth complications were preventable. Directors Paula Eiselt and Tonya Lewis Lee follow Gibson’s and Isaac’s bereaved partners as they fight for justice and build communities of support with other surviving Black fathers. Aftershock shines a light on the world of gynecology—one that has a long-standing history of exploiting and neglecting Black women in America—while simultaneously uplifting the families, activists, and birth workers who are striving to bring change.

Directed and Produced by: Paula Eiselt and Tonya Lewis Lee

The Proud Family: Louder and Prouder

A continuation of the acclaimed series, The Proud Family: Louder and Prouder follows the adventures and misadventures of newly 14-year-old Penny Proud and her Proud Family as they navigate modern life with hilarity and heart. The 2020s brings new career highs for mom Trudy, wilder dreams for dad Oscar and new challenges for Penny, including a socially woke neighbor who thinks she has a lot to teach her, bullying social media influencers who want to cancel her and her own teenage hormones.

Former police detective Rochelle Sellers (Vicky Jeudy) has had a year for the ages. After being shot by an unknown assailant and forced to retire, she divorces her husband and has to testify against him as the key witness in a high-profile police corruption trial. To ensure she is protected, she decided to live in seclusion and take on the role of caretaker for her ill father. However, when Jesse Holmes (Skyh Black) moves in next door, Rochelle is smitten. The perceived fairy tale takes a turn for the worst when it appears that Jesse is not the man he professes to be.

Courtesy of TV One

This new two-part documentary event explores the progression of Black comedy and the comedians who have used pointed humor to expose, challenge and ridicule society’s injustices and to articulate the Black experience in America. The series examines Black comedy through a unique lens, tracing the evolution and social awakening of the courageous comedians who dared to push against the constraints of their time and spoke truth to power.

During the 75th anniversary year of Jackie Robinson becoming the first Black player allowed to play modern Major League Baseball, this new two-hour documentary from The SpringHill Company After Jackie tells the often-overlooked story of the second wave of talented Black baseball players after Jackie Robinson, including Bill White, Curt Flood and Bob Gibson, who fought battles on and off the field to demand a fairer and more inclusive America for African Americans, and athletes around the world.

Courtesy of the HISTORY® Channel, The SpringHill Company and Major League Baseball

Black Love, from filmmakers Codie Elaine Oliver & Tommy Oliver and Confluential Films, seeks to answer, “What does it take to make a marriage work?” In the 6th and final season premiere, a diverse set of couples detail the early days of their relationship and how they knew the other was the one. From meeting and marrying in under a year, break ups to make ups, dating a coworker, and a pre-prison proposal, these couples highlight their beginnings and the hurdles they faced along the way.

A compilation of shorts:

Focuses on a newly promoted anchorwoman who falls into a severe depression when she is forced to choose between her dream job and her Vitiligo support group.

Revolves around a female boxer who is diagnosed with breast cancer and follows her battle as she and her wife fight for survival both in and out of the ring.

CIVIL, directed by award-winning filmmaker Nadia Hallgren, is an intimate vérité look at the life of maverick civil rights attorney Ben Crump. Considered a trailblazer of his field, Crump gives viewers an inside look at his mission to raise the value of Black life. As the civil lawyer for the families of George Floyd, Breonna Taylor, Black farmers and banking while Black victims, Crump challenges America to come to terms with what it owes his clients.

Directed and Produced by: Nadia Hallgren

Spotlight screenings that will appear virtually on ABFF PLAY are:

The Boston Globe culture columnist Jeneé Osterheldt created A Beautiful Resistance to carry on the tradition of Black arts and Black journalists in reclaiming the truth of Black folk.  Like Frederick Douglas taught us, there is power in representation. Too often, we are measured by our suffering. Blackness must not be defined by our brutalization. We are more than death. When we are depicted by our extremes, the truth of us is lost. We live, fully. Our joy, our dreams our everyday stories?  That’s a beautiful resistance. Every season consists of a weekly mixtape:  we deliver a short film, a longform story, a Q&A, and we invite the community to share their own beautiful resistance on Instagram. There is music, there is story, there is love. Joy lives her.  Join us Globe.com/abeautiful resistance

Courtesy of The Boston Globe

What is Costing Hollywood?

“What’s Costing Hollywood?” explores the ways in which more transparency around data collection and use can help the film and entertainment industry address costly racial disparities. The mini-documentary develops the story through the lens of changemakers like Kendrick Sampson (actor, activist, and co-founder of BLD PWR); Tas Plater (head of human resources at Endeavor Content); Fanshen Cox (inclusion rider co-author and development executive at Pearl Street Films); and Alex Simmons (data scientist at Snap Inc.) who provide insight into the underlying root issue of data collection and discriminatory algorithms — depicting a clear path for a new paradigm shift in the entertainment industry.

All official selections can be found here https://www.abff.com/miami/2022-screenings/.

The American Black Film Festival (ABFF) is an annual event dedicated to recognizing Black talent and showcasing quality film and television content by and about people of African descent. Dedicated to the belief that diverse artists deserve the same opportunities as their mainstream counterparts, ABFF founder Jeff Friday conceived the festival in 1997 as a vehicle to strengthen the Black entertainment community by fostering resource sharing, education and artistic collaboration. Now in its 26th year, the festival has become a cornerstone of diversity in Hollywood, providing a platform for emerging Black artists – many of whom have become today’s most successful actors, producers, writers, directors and stand-up comedians. The ABFF is a property of ABFF Ventures LLC, an entertainment company specializing in the production of live events that promote Black culture and achievement.
source: abffventures.com

Russia included John McCain on its list of Americans banned from Russia, seemingly not realizing he is dead

Recent Trends and Impact of COVID-19 in Brooklyn

Recent Trends and Impact of COVID-19 in Brooklyn

Which Dade high school athlete should be the Miami Herald’s Player of the Week? (Jan. 22)