In 2010 he joined the leadership of the Film Institute, becoming a reliable rainmaker who saw the group’s membership triple and who expanded the endowment for the AFI Conservatory from $1.5 million to nearly $15 million.

“He has tremendous fundraising experience and and the ability to attract funds to support the arts,” said Atlanta Ballet board chair Nancy Field, who also led the search committee. “That’s one of the reasons why he’s such an attractive candidate.”

In his efforts to expand the representation of minorities and women in the film business, West helped grow scholarships available at the American Film Institute’s conservatory from $300,000 to $1.8 million.

Those scholarships targeted groups that had historically been shut out of film (leading to the “Oscars so white” hashtag): “More than 30% (of scholarship recipients) were from under-represented communities and almost half were women,” he said.

“It’s now translating into these filmmakers out working in the community, for Disney, Sony, Warner Bros., Netflix, and providing talent they need from a trusted source.”

Field said the Atlanta Ballet is hoping for the same process to occur in Atlanta, where there is scant representation of African Americans, especially Black ballerinas, in the dance company.

“Their pipeline program, to elevate storytellers of color and women storytellers; that was the one thing that jumped out for me,” said Field. “How it was so relevant in what we’re trying to do. He was able to garner a lot of enthusiasm and support for that program, and hopefully he will do the same thing for us.”

Field said Atlanta Ballet finds itself in a “competitive disadvantage,” when students at the Centre for Dance Education are lured away “by other companies that have bigger budgets and greater prestige,” such as the Royal Ballet, the Boston Ballet and the San Francisco Ballet.

A bigger endowment should help keep those dancers in Atlanta.

West joins a team in which co-equal leaders balance artistic ambitions with practical concerns. “They have to work together to get things done, and sometimes they can have conflicting desires,” said former board chair Elizabeth Adams. “Arturo said that though he felt it was not always the easiest path, it ended up resulting in some of the best decisions.”

West said his aim is to make Gennadi Nedvigin’s ambitions a reality. “My job as the director is to ensure that he has the resources he needs to fulfill his vision — and to be prudent,” he said.

Nedvigin said in a statement that “Tom’s extensive experience in successful fundraising, board development and governance combined with his knowledge and understanding of the benefits that the arts offer our community are invaluable.”

West was trained as an actor and said that he is happy to be back in the performing arts. Though it lasted 11 years, his sojourn into film was, he said, “straying a bit off my path.”

Said Adams, “at heart he’s an artist with a real passion for the arts.”

West arrives at his post as the company deals with the aftermath of the COVID-19 pandemic, and the eruption of new viral strains. 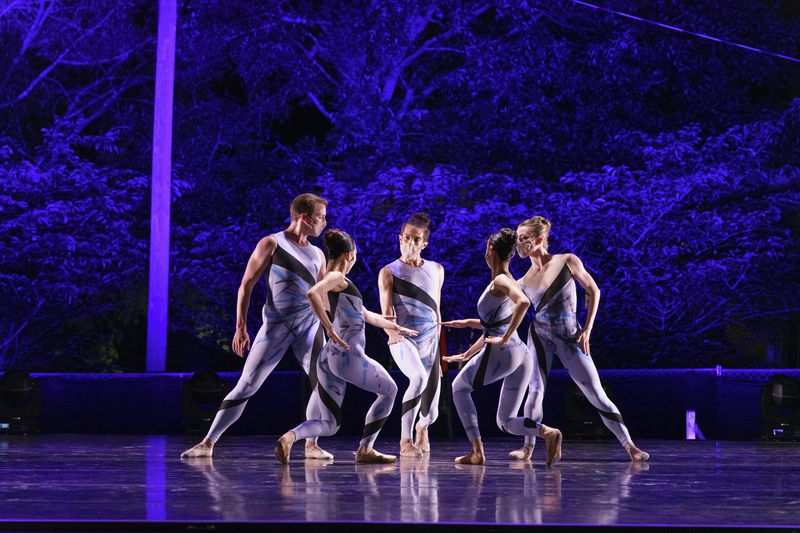 Members of the Atlanta Ballet performed outdoors this spring as part of the “Skyline” series of events at Georgia Tech, but haven’t been back to their home venue at the Cobb Energy Centre in almost two years. Their new season will bring them back there beginning in December. Photo: Kim Kenney

Like many performing arts groups, the company shifted to streaming its performances, and performing outdoors during the nearly two-year hiatus caused by the pandemic. Plans are still in place to return to the Cobb Energy Performing Arts Centre this holiday season for indoor productions in front of live audiences.

But the company is taking additional precautions, and has raised $3.7 million from its patrons in the “Back to the Stage” campaign to provide COVID-19 relief and recovery.

LOL Look At This Minivan That Has A Massive, Furry Buffalo Bill On It

Bruins Collectibles Up For Auction/Raffle For Local Charities

Bruins Collectibles Up For Auction/Raffle For Local Charities