On Friday, at the Kentucky Center for African American Heritage, Gov. Andy Beshear signed three bills that will help build a better Kentucky by supporting postsecondary education, economic development and public safety in the Commonwealth.

“This legislation will help us build that better Kentucky we want for all of our people. Kentucky can only be its strongest when everyone has real opportunity. These measures – which garnered bipartisan support – will promote equity and fairness, both in how resources are allocated, who controls these resources and how communities are treated,” said Gov. Beshear. “I applaud lawmakers for coming together to put our people ahead of politics.”

The Governor signed the following bills:

“For generations, Kentucky’s HBCUs have been meeting the need to ensure all students have access to a high-quality education,” said Gov. Beshear. “From pre-K through college and beyond, we know education is the key to breaking cycles of poverty and creating a pathway of opportunity for more Kentuckians.”

“SB 270 is a game-changer. With the stroke of a pen, the Commonwealth of Kentucky will put our money where our mouth is. We are not asking our citizens to ‘pull themselves up by their bootstraps’ when we know they have no shoes,” said Dr. Brown. “We are offering a helping hand in standing up and walking forward. This is the best of state government.”

“This legislation will help Simmons College create ethnic diversity in the school systems throughout our state,” said Rev. Dr. Cosby. “We’re blessed because we have a Governor whose leadership, vision and energy are making things happen. I also want to thank our legislators for making this happen. Those who are closest to the problem are closest to the solution. If you want to fix West Louisville, or any distressed community, empower the people who are in those communities to fix their own problems.”

“Some of the best and brightest African-Americans in the history of our country were educated at HBCUs,” said Sen. McGarvey. “This law reinstates the teaching program at the Simmons College of Kentucky, allowing them to now produce board certified teachers. By making these changes, we hope to help support HBCUs and encourage more African-American educators in the state.”

“House Bill 321 is bipartisan legislation that aims to foster transformational change in the West End of Louisville,” said Gov. Beshear.

“Currently, 80 cents of every dollar of revenue developed in West Louisville ends up leaving the area. This legislation will create a $30 million initial investment in West Louisville, and community leaders who live here and know the people will decide how those funds are utilized.”

HB 321 will encourage investment in West Louisville by:

• Establishing the West End Opportunity Partnership (WEOP) to oversee this new economic development program;
• Encouraging investment in the established development area through the implementation of state and local Tax Increment Financing or TIF incentives;
• Ensuring all new housing projects include housing deemed affordable by federal guidelines for low-income families; and
• Providing a refundable income tax credit for residential property owners in the development area who maintain the property as their principal residence.

“The creation of the WEOP was a collaborative effort with fellow senators and individuals involved with different sectors of the West End over the past year. This legislation is the end result of that effort, which could be a transformational tool to change the economic trajectory of the West End of Louisville,” said President Stivers. “This is a great opportunity for the residents of these neighborhoods to have long-term investment and reinvestment over the next 20 years. The WEOP is a prime example of what can happen when individuals, with unique perspectives and backgrounds, come together with a goal of bettering the lives of Kentuckians.”

“This WEOP is a significant tool, along with others, to stabilize and improve homeownership, incentivize economic development and promote empowerment of West Louisville residents, with neighborhood driven planning,” said Sen. Neal.

“The WEOP is an opportunity for the West Louisville community to choose how West Louisville will grow,” said Rep. Stevenson. “It is the opportunity for us to unite and engage. The WEOP will impact the lives of all Kentuckians – Kentucky will begin to be known for how well we take care of Kentucky’s families. The partnership is a great beginning because it allows all community members to let their voices be heard. What is possible with this tool is moving families from renting to home ownership and growing more businesses in West Louisville. This will have an economic impact for the entire state.” 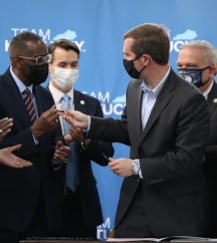 Senate Bill 4 is another step toward creating a better Kentucky with good criminal justice reform that will protect both law enforcement and the public.

“I cannot know the depths of pain caused by systematic racism, but in my administration we are committed to listening and continuing to act. I am signing Senate Bill 4 to help ensure no other mother knows Tamika Palmer’s grief at the loss of her daughter Breonna Taylor,” said Gov. Beshear. “This is meaningful change and it will save lives.”

The bill states that approved no-knock warrants must be executed by a specially-trained response team equipped with body-worn cameras and clearly identifying insignia (counties with a population less than 90,000 will be allowed an exception to the response team and body-worn cameras with court approval). An EMT must be on site to provide medical assistance. Approved no-knock warrants can only be executed between 6 a.m. and 10 p.m. unless a court determines otherwise.

“I’ve witnessed a lot of legislative sessions – the bipartisan exchange during this one was extraordinary. This Governor is extraordinary,” said Sen. Neal. “It is not enough, but when you really look at Senate Bill 4, going forward it will not be business as usual.”

“We have now taken a step in the right direction. We’ve been asking people to say Breonna Taylor’s name. This shows we heard her name,” Sen. Reggie Thomas said.

“Senate Bill 4 was another bipartisan piece of legislation developed with senators from diverse backgrounds. The input from Sens. Neal, Thomas, Carroll and Schickel were crucial to the process of creating a bill that is sound in both policy and process,” said President Stivers. “Additionally, I appreciate the discussions I was able to have with Rep. Scott and her perspective helped me formulate the final version of SB 4. Hopefully this legislation will help prevent incidents, like the tragic case of Breonna Taylor, from occurring again.”

Elder can never be repaid in full for years of racism | News, Sports, Jobs