TAMPA, Fla. – Candy Lowe is leading a group on a shopping spree throughout Tampa, stopping at businesses owned and operated by African Americans.

It’s part of the Black Business Bus Tour, a venture Lowe started almost 15 years ago as a business owner herself.

“Just came up with this way to get people to come to my shop was to bring them to my shop, take them out to other Black-owned businesses and take them back to my shop so that was a really big economic empowerment day for my tea shop,” said Lowe.

Sana Hampton of Envyy Hair and Beauty says the bus tours have increased her business.

“A lot of support in the community. A lot of exposure. A lot of unity within the East Tampa community,” she explained.

Regina Johnson of Queens Vision African Apparel said the tour is opening doors for her and allowing her to open doors for others.

“I’ve met people that I normally wouldn’t have met. I’ve been able to help others start their business, as well, so it’s been an exciting journey. Something I didn’t expect. But I’m so glad I’m on this ride,” said Johnson.

For some business owners, it’s saved them.

“Without her, I don’t know what I would have done. Being part of the Black Business Bus, it helps keep your business afloat, especially when revenue is low,” said Jacqueline Monge of Cocoa Fashion.

Lowe says she believes Tampa is a nationwide leader in Black-owned business support.

“I see more businesses staying in operation because they tie into the Black Business Bus Tour,” said Twanda Bradley, the planner for the tour.

Young entrepreneurs also get a glimpse of future possibilities. 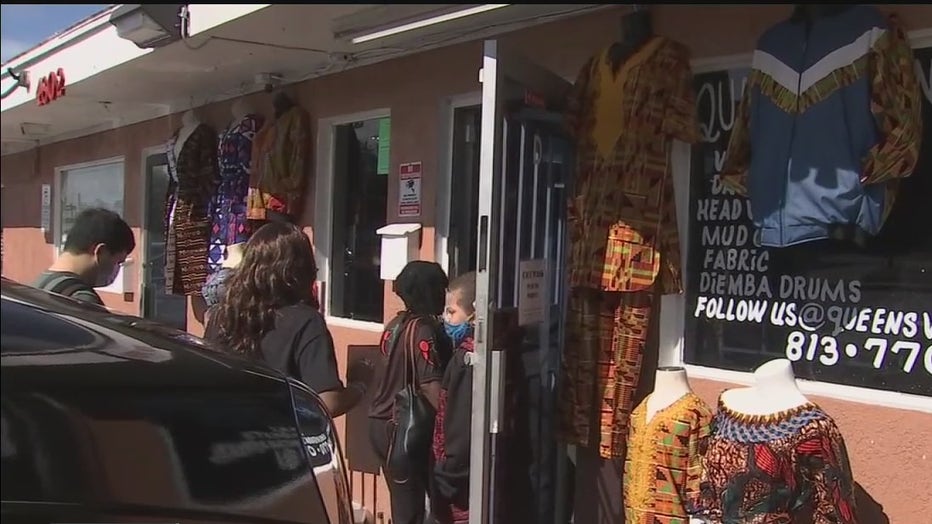 “The reason that I want them to be exposed to the Black Business Bus Tour is because they need to see people that look like them that own businesses. That is very important,” said Ischolina Williams of the Linabean Academy.

“I think it is a good chance for other people and our class to learn about entrepreneurship,” said Marlyn Lynn, a student at the Linabean Academy.

Johnson added, “I did not see a lot of people like me that was in business especially doing retail so I hope that they can see that there is a possibility for them to do anything that they put their mind to.”

Lowe said she’s seen growing diversity in her customer base.

“In our city, we have as many white people on the buses as we have Black people. That is very, very good because we need more than our small group of people in our city supporting businesses. We need the entire city to know how great the small, Black-owned businesses are in the city of Tampa.

“It’s never just about that day. It’s about the return. It’s about sharing with others after that Black Business Tour date experience,” said Lowe.

Lew’s Myer investment is finally in the black but has he missed the takeover boat?