Blues for Martin and Coretta

in African Americans
Reading Time: 6min read
A A

One of the brothers said, “Every time that I think of slavery and if it done the race any good, I think of the story of the coon and the dog who met.

The coon said to the dog, “Why is it you are so fat, and I am so poor, and we both is animals?

“The dog said, “I lay around the master’s house and let him kick me and he gives me a piece of bread.”

The coon said to the dog, “better that I stay poor, them my sentiment. I’m lak the coon, I don’t believe in buse.” 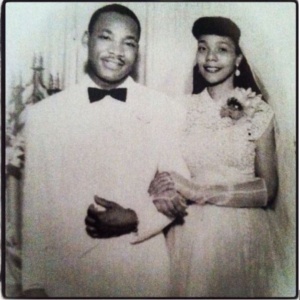 The coon had the Blues.

150 years ago, this mighty race was a penniless bondsman, laborless and homeless. We got the blues because the Master class took the position, the Yankees freed you, let them feed you. This history is mentioned to let you know that Dr. Martin Luther King Jr.  had millions of predecessors that understood struggle and the cost of discipleship. Blues was about being willing to pay the price for an unborn generation to reap and harvest opportunity. Frederick Douglass defined Martin’s blues this way: Men may not get all they pay for in this world but before it is over, they will certainly pay for all that they get. `

Martin was possessed by the No colored people allowed blues when he married Coretta and had to consummate the wedding night in a funeral home guest room.

Martin had the blues long before he met Ms. Rosa Parks, the warrior seamstress, and led the Montgomery Bus Boycott. By age 13, he was battling severe depression and he attempted a sin thought to be unpardonable, unsuccessfully, suicide, not once but twice. Perhaps he was too young to know that he had been given an assignment and he could not die until the road would end in Memphis. Dr. King’s blues walk, like Jeremiah had been prepared for him in his mother’s womb.

Destiny and fate met and birthed the MLK blues. In a house that his ancestors helped to build, we were asked a “sick and perverted “question. The MLK blues is about existential absurdity. It is about trying to register and vote and being asked, “how many bubbles in a bar of soap?” Before John Coltrane composed Alabama, a black male was attempting to buy a can of Prince Albert tobacco. To complete the transaction, the store clerk instructed him to say “Mr. Prince Albert” since the can represented a white man. The brother said, give me Bull Durham tobacco, since I don’t have to say Mister.

Dr. King’s blues is about the songstress Billie Holiday looking at 3500 black men lynched, and black women and families being disrespected and Singing Strange Fruit on Southern trees. This craziness drove Nina Simone to suffer from a depression and sing “Mississippi Gotdam” and “I wish I knew how it felt to be free” and hurry to Dr. King’s side.

Blues meant that the hounds of persecution would never stop nipping at his heels. His faith statement said that foxes have holes, birds have nests, but his Master had nowhere to lay his head. Dr. MLK blues gripped nearly every moment with the thought that DEATH was hunting him.

The blues that Martin had were renunciation blues, disgust, mercy and transformation blues and realignment blues. Before the What’s Going On blues jumped on Marvin Gaye, the Martin that the rulers will not present to the schoolchildren, Martin followed a brash Congressman from Harlem who looked at America and said” If the Negro is good enough to drive tanks on the battle fronts of Europe and Asia, he’s good enough to work on the assembly lines of America… “

The MLK Blues led him to denounce an ugly war in Vietnam and he called our country the “greatest purveyor of violence in the world. He said that the security that we professed to seek in foreign adventures will end up in decaying cities. His blues asked Can America be #1 in military power, but number 20 in doctor patient ratio and number 13 in infant mortality ratio. A superpower who bought a lie that COVID 19 virus was a hoax now has 370, 000 soul’s dead.  Dr. King’s Blues is COVID Blues.

The MLK blues led him to confront America’s, Preacher Billy Graham about keeping company with segregationist and admirers of Confederate secessionist and traitors. Dr. MLK and SCLC took America’s preacher to school about his scandalous thirst for validation and his gluttonous appetite for lies and liars.

The MLK blues is Dr. Martin Luther King was telling President Kennedy and Attorney General Kennedy that his message was taken from a sharecropper in Mississippi that had 16 chilun and a tiny house with dirt floors, “Is I a man or Ain’t I a man ?.”

The MLK Blues led him to give a 15 minute “I HAVE A DREAM “speech at the March on Washington that is regarded as the speech of the century.

When he came to Houston, the Houston Coliseum was nearly empty for his speech. The white power structure seduced enough of the black leadership to renounce Dr. MLK and his righteous cause. Areatha Franklin had the blues and sang a bluesy gospel rendition of his favorite hymn that was built on the field hollers, chants and shouts of a people who worked from can’t see to can’t see.

Hope was in every chord. The hope that you hear in BB King’s “There has got to be a better world somewhere “would drive him to Memphis to embrace the Death Angel. Firehoses, cattle prods and brazen white supremacist murders of civil rights workers Goodman, Scherner and Chaney birthed Sam Cooke to write a game changer than would win the hearts and minds of the people who were on the right side of history. Yes, A change is going to come is much a BLUES hymn as much as it is Baptist gospel.

From a heavenly realm, Dr. MLK spoke on behalf of George Floyd, Eric Garner and Breonna Taylor, the I can’t breathe Martyrs by saying to America, “What the hell are you all doing down there? “

Dr. Martin and his inseparable soul mate, Coretta might define winter 2021 as America’s Blues through a Greek myth.

“As the generations pass, they grow worse. A time will come when they have grown so wicked that they will worship power; might will be right to them and reverence for the good will cease to be. At last, when no man is angry any more at wrongdoing or feels shame in the presence of the miserable, Zeus will destroy them too. And yet even then something might be done, if only the common people would rise and put down rulers that oppress them.”

Let Monday, January 18th be a DAY ON NOT A DAY OFF, A DAY OF SERVICE.

Letter from the Birmingham Jail

Letter from the Birmingham Jail