“Getting here certainly gave me a new appreciation for why politicians lie to get into office,” says Robert, a teenager running for governor in the documentary “Boys State.”

Ben, another teen with a pivotal role in the movie, shares this thoughts on campaign tactics: “You have to use personal attacks and you have to find divisive issues in order to differentiate yourself at all.”

“Boys State,” which arrives Friday on the streaming site Apple TV+, is the most important political movie of 2020, because it forces viewers to consider the current political system’s impact on young Americans.

A grand jury prize winner at the 2020 Sundance Film Festival, the documentary focuses on the Texas portion of the Boys State leadership camps that are sponsored each year by the American Legion. Past events have helped shape future leaders like former President Bill Clinton, Supreme Court Justice Samuel Alito, and U.S. Sen. Cory Booker, among others.

The movie chronicles how Boys State, which draws 1,100 teens together, splits participants randomly into two political parties and then assigns them the tasks of drafting party platforms and nominating a slate of candidates, with the highest office being governor. 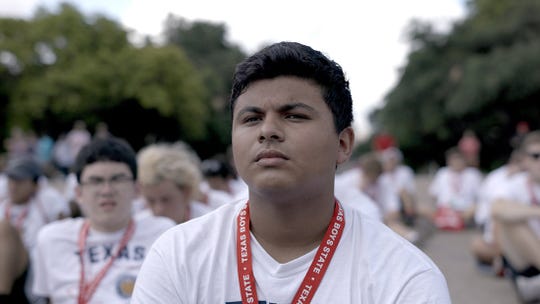 Directors Amanda McBaine and Jesse Moss paint vivid portraits of campers as they do everything from calling for secession to vowing their masculinity won’t be infringed. There’s also a suggestion floated to ban certain pizza toppings.

But the overall mood is surprisingly serious as the teens must decide what they will or won’t do in order to succeed politically.

One of the goals of doing a film about Boys State and its participants, according to Moss, was finding out “to what extent were the norms of political discourse of our current moment influencing their behavior, their conduct, and contaminating it, if you will.”

The movie focuses mostly on four teens who land key roles in the campaign process. Ben, a political junkie and Reagan fan, emerges as a fierce party leader who sees his job as doing what is necessary to win. Robert, a confident, outgoing candidate for the gubernatorial nomination, talks like a conservative, but he isn’t actually as right-wing as his speeches would indicate.

There’s also Rene, the party chairman  and persuasive orator who’s one of the few Black participants among the mostly white campers. Rene becomes the target of a racist online post and faces a push by a small number of party members to impeach him, an effort that feels like a microcosm of delegitimizing efforts like birtherism that Barack Obama endured as the first African-American president.

‘Boys State’ looks at the 2018 edition of the leadership camp in Texas where high school seniors gather to build their own mock state governments. (Photo: APPLE)

The hopeful heart of the movie is Steven, an earnest candidate for governor who comes from a modest background and whose mother was at one time an undocumented immigrant.

While impressing his fellow teens with his willingness to seek compromise in a polarized environment, Steven also is attacked by Second Amendment hardliners for having been involved with a “March for Our Lives” event organized as a response to the Parkland school shooting and for backing moderate reforms in gun control.

Out of all of the issues impacting on their future lives, the teens seem to spend the most time arguing two hot-button topics — guns and abortion.

“Boys State” can be something of a Rorschach test of a viewer’s own thoughts on where democracy is heading.

“It does function to some degree, I think, as a measure of your own optimism or cynicism about our future and our politics,” says Moss.

Describing his personal take-way from the project, Moss says, “It’s made me very hopeful to see young men like Steven and Rene navigate that space successfully, to find their voice, to summon the better angels of the electorate, to go as far as they did to build power.”

McBaine and Moss don’t shy away from examining the play-to-win tactics at Boys State, the same ones that are are having such a corrosive effect on contemporary politics. But they’re also sensitive to the pressures of growing up as part of Generation Z and dealing with things like social media and negative memes.

“Gen Z, way more than all of us … they don’t know a world without social media, so they’re a little bit steeled to it in a way that I’m not, but also (they’re) internalizing it in a way I find a little scary,” says McBaine. “There’s an anxiety that (social media) produces, a layer of anxiety on top of all the other existential threats they’re facing like climate change. They’re shouldering a lot.”

According to the filmmakers, “Boys State” ultimately shows the value of bringing young people together to discuss politics and to learn that it’s possible to work together with someone who doesn’t share your point of view.

The movie is a chance “to think about, how do we create healthier spaces for people to engage with each other, people who might come from different backgrounds and have different politics,” says Moss.

“We can’t expect that to happen suddenly in Washington if it doesn’t happen earlier in our lives.”