For the first time in NBA history, most of the head coaches are now African American, just like the majority of the players.

​The Brooklyn Nets promoted interim head coach Jacque Vaughn to head coach on Wednesday. With the African American’s promotion, there are now 15 full-time Black coaches and one Black interim coach (Joe Mazzulla of the Boston Celtics). The 16 current Black NBA coaches are a record for a league which, according to Statistica, is made up of 71.8% Black players.

​“It’s never been for me how many Black head coaches there are,” said Philadelphia 76ers coach Doc Rivers, an African American with 1,048 wins as a head coach entering Wednesday. “For me it’s been about Black coaches having the same opportunity as everyone else at becoming head coach. The fact that’s it’s now 16 only amplifies that.

​The sudden rise in African-American head coaches in the NBA is stunning considering the low point for them just two years ago.

Before the start of the 2020 NBA Finals, NBA commissioner Adam Silver said the low number of Black head coaches had to improve. His words were heeded as there are also now 17 NBA minority head coaches, including Erik Spoelstra of the Miami Heat, who is Asian American.

“The most impressive thing about there being 16 Black head coaches in the NBA and the most significant thing is that there is equal opportunity for Black coaches to be head coaches, which hasn’t always been the case,” Cleveland Cavaliers coach J.B. Bickerstaff said. “Owners and general managers are open-minded enough to see past the exterior and see the real qualifications that make leaders, teachers, and coaches.”

Vaughn also added to a new trend of African Americans who are former NBA players getting opportunities to be coaches.

“Jacque is a tremendous human being, and more than qualified, prepared and able to lead that team,” Ham said.

‘I don’t understand what took so long’: Black men now half of the NBA’s head coachesRead now

Vaughn coached the rebuilding Orlando Magic to a 58-158 record from 2012 to 2015. As a Nets interim coach during the 2019-2020 season, the Los Angeles native coached the franchise to a 7-3 record and a postseason appearance. Vaughn took his name out of consideration for the Pelicans’ head coach job in 2021 because he wanted to be close to his two teenage sons.

After replacing Steve Nash on Nov. 1, the Nets were 3-2 with Vaughn as interim head coach after Wednesday’s 112-85 win against the New York Knicks. Vaughn also has eight years of experience as an NBA assistant coach.

“I am happy for Jacque. He has paid his dues as a head coach, as an assistant, and he is a great guy who works his butt off,” Orlando Magic coach Jamahl Mosley said. “It’s great to see a Black coach get another opportunity.”

“I guess I was the write-in candidate in the minds of the election right now,” Vaughn joked Wednesday. “But I’m OK with that. I said to my wife I might not have been her first choice. But we’ve been together for 20 years, so it can all work out.”

ESPN’s Adrian Wojnarowski reported that the Nets were expected to hire Udoka but opted against for two main reasons: The lengthy antisemitism controversy with Nets star Kyrie Irving, and also the potential drama that could come from the hiring of Udoka in the aftermath of his suspension in Boston for an improper relationship with a female subordinate.

The Celtics suspended Udoka on Sept. 22 after a monthslong investigation by an outside law firm that found multiple violations of team policies but did not point to a larger cultural problem of sexual misconduct. The Nigerian American was replaced by interim coach Mazzulla, whose mother is Black. 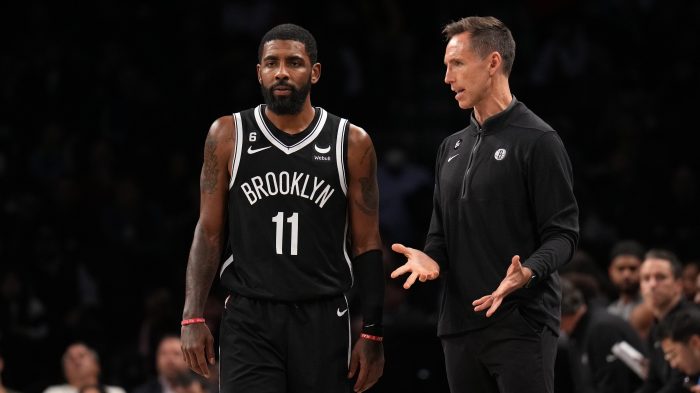 Add another chapter to the Brooklyn Nets’ history of misstepsRead now

Houston Rockets coach Stephen Silas said Vaughn’s hire gives up-and-coming assistant coaches the knowledge that their race will not be the deciding factor in their ability to get a head job.

“It’s great that in the NBA we can truly say the head coach was selected because he is the right person for the job regardless of race,” Silas said. “As for Jacque, the thing that stands out about him is his positivity. Combine that with the fact that he is a knowledgeable coach with head coaching experience, he is a great hire.”

Former NBA coach Bernie Bickerstaff has seen a lot of challenges and struggles in his coaching days in the league dating to 1973.

“I tip my hat to the owners, the NBA and the general managers,” said Bernie Bickerstaff, now a senior basketball adviser for the Cavaliers. “But there are not just 16 Black coaches. There are 16 of the best coaches, period. It’s terrific. It’s earned. It’s always great to see people get opportunities when they earned them.

“These were not token appointments. There are guys with credibility who have been in the foxholes and doing their jobs in the NBA.”

Following their rout of the Knicks on Wednesday, Nets star Kevin Durant presented Vaughn with the game ball.

“I am excited for him. I know about the work he puts I every day,” Durant said after the win. “I know he cares about the development of each player and this team as a whole.

Marc J. Spears is the senior NBA writer for Andscape. He used to be able to dunk on you, but he hasn’t been able to in years and his knees still hurt.

Stage play ‘What the River Knows’ unearths racism, trauma, redemption in backdrop of 1898

Stage play ‘What the River Knows’ unearths racism, trauma, redemption in backdrop of 1898