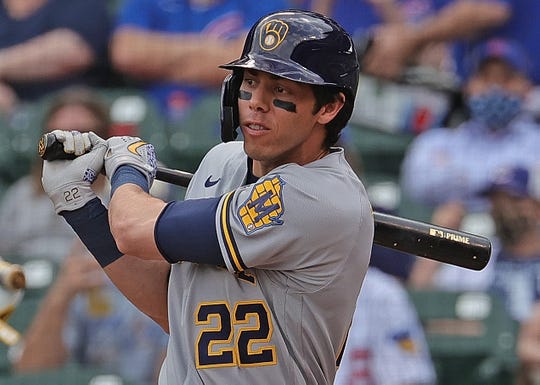 Milwaukee Brewers star leftfielder Christian Yelich sat out his fourth consecutive game Friday night with an ongoing back issue but manager Craig Counsell said there were definite signs of progress being made.

“He came in yesterday and started some baseball activities (on the team’s off day),” Counsell said before the Brewers opened a three-game series against Pittsburgh at American Family Field. “He’s doing a little more today. So, we’re making progress. (He’s) hitting, running, throwing.

“So, we’re making progress. That’s kind of where we are right now.”

Counsell noted this episode with Yelich’s back has followed the path of past episodes, of which Yelich has experienced at least once in every full season since the Brewers acquired him in 2018. They never have lasted long enough to warrant a stay on the injured list but usually have sidelined him for three or four days, if not more.

“In all these cases, it’s been a similar time frame,” Counsell said. “We’ve always been short of an injured list. But it’s always cost him at least three days.

“We’re in that range right now and we’re starting to get better. This is similar in that vein. It’s never gotten to the point of an injured list, at least with the Brewers, and we’re trying to keep it that way.

“It has cost us a little bit of time. We’re just trying to be cautious with it and get him back to the right spot.”

With Yelich sidelined and second baseman Kolten Wong (oblique strain) and centerfielder Lorenzo Cain (quadriceps strain) on the IL, the Brewers have been well below full strength this week.

Counsell said Wong got back on the field Friday to take grounders and do some running with hopes of returning on the trip next week to San Diego and Chicago.

Because they were off Thursday, the annual Jackie Robinson Day in Major League Baseball, the Milwaukee Brewers had to wait until Friday night to honor the man who broke the game’s color barrier, with every player wearing No. 42.

But Brewers outfielder Jackie Bradley Jr. already paid his tribute to Robinson by donating a full day’s pay to the Players Alliance, supporting the launch of its “Breaking Barriers” scholarship campaign. Teammate Lorenzo Cain was on the list of more than 230 players also donating a day of their salary.

“It’s special,” Bradley Jr. said. “They’re doing a lot of great things in the organization. That encompasses all of baseball. The Players Alliance is taking the initiative of getting everybody together to do a lot of great work.

“I’m so glad to be a part of it and pushing to be a leader to help a lot of young kids along the way.”

The Players Alliance is a nonprofit organization founded by a group of active and former MLB players with the goal of improving representations of Black Americans in baseball. As part of the “Breaking Barriers” campaign, the Alliance will make a financial commitment to the Jackie Robinson Foundation to support the launch of a scholarship fund to aid students as soon as this fall.

The Players Alliance raised more than $1 million on Jackie Robinson Day in 2020, investing proceeds directly into Black communities. Initiatives included the “Players Pull Up tour,” which provided food and other resources to more than 20,000 families in need during the coronavirus pandemic.

As for what it means for Bradley, Jr., an African American, to put on the No. 42 every year, he said, “It’s special. To be able to look back at how far we’ve come, it’s an honor. I’m very thankful for the opportunity to be able to wear the No. 42. We’ll get to celebrate him today.

“This is the second year (the Alliance) has done this. There has been a lot of action across the country, doing things in respective cities, the drive-ups and administering supplies and equipment. It’s such a fun thing to be a part of, knowing what you’re doing, the time and money you’re donating, is put to something that will grow the game and change people’s lives as well.”

Bradley Jr., who turns 31 Monday, was signed off the free-agent market after spring camp had begun. At the time, the question was how Counsell would get four “starting” outfielders enough playing time to keep all of them productive.

That question became moot this week when Yelich has been unable to play and Cain went on the IL. Bradley Jr. now will get regular starts in center, his natural position, while trying to get going at the plate.

Entering the series opener against Pittsburgh, Bradley Jr. was batting .154 with a .195 on-base percentage, with a .503 OPS, one homer, two RBI and 16 strikeouts. He got a later start than other players during the exhibition season but did not use that as an excuse for his slow start.

“I feel good; I’m healthy,” he said. “I obviously haven’t got off to the start I would have liked but that’s OK. We’ve got a long ways to go. I’m going to continue to work and I’m going to get better.

“Being able to play every day is very helpful because you’re able to get the reps in and consistently work on your game but there are no excuses. I’m usually a slow starter and work my way back up.”

With 38 major-league games under his belt heading into Friday, Tyrone Taylor was the least-experienced position player on the Brewers’ roster. But with the trade of Orlando Arcia earlier this month, Taylor  and Brent Suter are the longest-tenured players in the organization with a full 10 seasons under their belts.

“It’s nice,” Taylor said. “I think I get a minor-league pension now, so that’s good news.”

Taylor, 27, was the Brewers’ second-round pick out of Torrance (Calif.) High School in 2012 while Suter, 31, was a Harvard University product who was taken all the way down in the 31st round.

As luck would have it, the two wound up as roommates along with 30th-round pick Jon Arnold as they began their professional careers in the rookie Arizona League that summer.

“It was awesome,” said Taylor. “I was 18 years old and pretty homesick my first couple days. I joke around with him now because I remember feeling uncomfortable because I had two college roommates, and the first night there I had been this higher draft-pick guy, signed for a decent amount of money, and I went across the street to Wendy’s and got them dinner.

“That was my, ‘Here you guys go, hopefully you guys like me,’ kind of deal. I just remember feeling super uncomfortable. But you know Suter. Suter’s the man. He made me feel comfortable right away, and I’m thankful that it was him, actually.”

While Suter broke into the majors in 2015, it took Taylor until 2019 to make his Brewers debut. He played 15 games in September of that season and 22 more last season before heading into 2021 in position to make the opening-day roster as a reserve.

Taylor did his part with a good showing in camp. But Milwaukee unexpectedly signed Bradley Jr. and kept Billy McKinney instead of Taylor – who had a minor-league option remaining – on its initial 26-man roster.

So, back to the alternate training site it was for Taylor, who spent time in Appleton last season as well. But as it turned out, Taylor didn’t have to wait long for a callup. He was brought back Wednesday after Cain went on the IL and made his season debut in a win over the Chicago Cubs.

“What comes to mind for me is just gratitude, man,” Taylor said of getting another shot. “Just being able to come here every day and still have the opportunity to play baseball, the game that I’ve loved since I was 10 years old — my 10-year-old self would be extremely proud of me.

Cubs manager David Ross was upset that he, game-planning coach Mike Borzello and pitcher Ryan Tepera were all suspended by Major League Baseball for Tepera throwing behind Brandon Woodruff in Tuesday’s game against the Brewers.

Tepera, who has been banned for three games, is appealing the penalty despite admitting throwing at Woodruff. The situation stemmed from Chicago’s displeasure at catcher Willson Contreras being hit three times by the Brewers in the teams’ first two series, including once in the helmet.

Whether that will keep the Cubs – or other teams for that matter – from trying to extract a pound of flesh for perceived on-field injustices is seemingly up for debate.

“They’re doing what they’ve always done right now,” Counsell said. “Nothing’s changed in their policy right now. This is nothing new. I actually don’t think what they’re doing now is any deterrent at all.”

Starter Brett Anderson, who has no problem sharing his opinion on matters, came down somewhere in the middle.

“Nobody wants to get hit, regardless of the intent,” he said. “I haven’t gotten hit and I don’t want to get hit. It can’t feel good, especially with the velocity that these guys throw. Woody and some of the other guys. I see both sides of it, as cliché as it is, not wanting to get hit, but there’s no intent from our side.

“I kind of see it both ways. The suspension is kind of weird because they didn’t hit him, but they tried to hit him. It’s kind of a wishy-washy thing, but I see both sides of it.”

What, in Counsell’s opinion, could deter teams from throwing at each other in retaliation?

“I’ll let you figure that out,” he said.

The Brewers travel back to Wrigley Field for a three-game series beginning April 23.

Our subscribers make this reporting possible. Please consider supporting local journalism by subscribing to the Journal Sentinel at jsonline.com/deal.

Disney's ugly transformation of a US war hero into a villain

‘It’s so important for us to know our history,’ Henderson magnesium plant helped bring working opportunities to African American residents

Not everyone who needs temporary housing is on vacation, and this Vegas startup is addressing that need

What would reparations for Black communities look like in rural Missouri? | KCUR 89.3