From a young age to present day, the Black hair salon has always been a safe space for myself and others to converse about life and all it throws at us. Growing up I would frequent my family’s hairstylist, Laketa, bimonthly to get a silk press, weave, or new relaxer — a process that would take one and a half hours at minimum and close to three hours if the salon was backed up. I didn’t mind the time, though, because there was always good music, a movie playing, snacks, books, and tons of chatter. Still, every time I leave the judgement-free Black salon, I look good and feel full — and I’m not alone in this feeling.

For Wil Shelton, hairstylist, former salon owner, and founder of Wil Power Marketing, a multicultural marketing company with a network of over 100,000 barbershops and salons across the nation, this sense of community was felt every day at his salon. “The Black salon is like the ecosystem that makes the Black community flourish,” Shelton told POPSUGAR. “Your stylist can get more out of you in 15 minutes then a therapist can get in 15 years. They’re the ones that blow-dry the stress and anxiety away, brush through the hardships and distractions, and comb through the tangles and obstacles that stand between you and your destiny.”

Because there’s this intense level of trust, clients would constantly ask him what song was playing or what movie they should see. Based off his recommendations, they would then go purchase the album or movie tickets. “One day, I realized I was helping the entertainment industry promote their projects to the shop,” Shelton said, which is why he started thinking about partnerships that let the business know “African Americans are a really captive, receptive audience that they should know about. I explained how it was a blind spot.”

Because Aretha was an icon for beauty and style, the campaign was really about how Aretha gets respect in the Black beauty salon as well.

As such, countless partnerships with iconic movie studios were born, and some 25 years after that realization comes his latest with Cristal Franklin (the great Aretha Franklin’s niece), MGM, and United Artists to promote Aretha Franklin’s biopic Respect, released Aug. 13. More than 100,000 Black barbershops and salons in Shelton’s network received customized branded swag designed by Cristal Franklin: posters, nail files, T-shirts, barber capes, and face masks — to get clients excited about the upcoming movie. 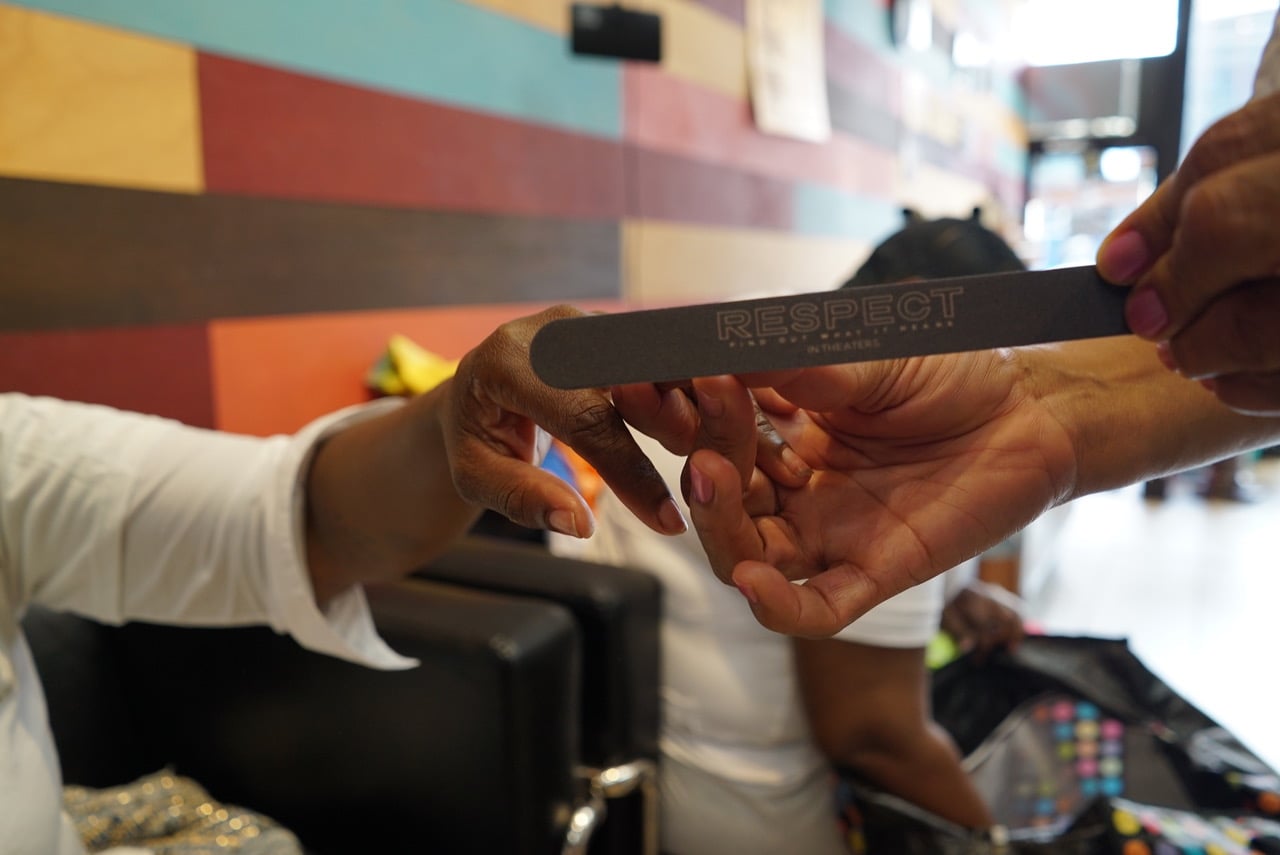 “Because Aretha was an icon for beauty and style, the campaign was really about how Aretha gets respect in the Black beauty salon as well,” Shelton said. “A lot of the time African American women have a love-hate relationship with their hair, and it seems like they are battling with society as much as they are with their own hair.”

Shelton believes the Black salon can empower and reconnect women with who they want to be at the end of the day. It’s high time for movie studios to recognize the power that African Americans have on culture. After all, Black women’s spending power continues to grow every year, we watch more movies than any other race, and we watch television 40 percent more than any other group. 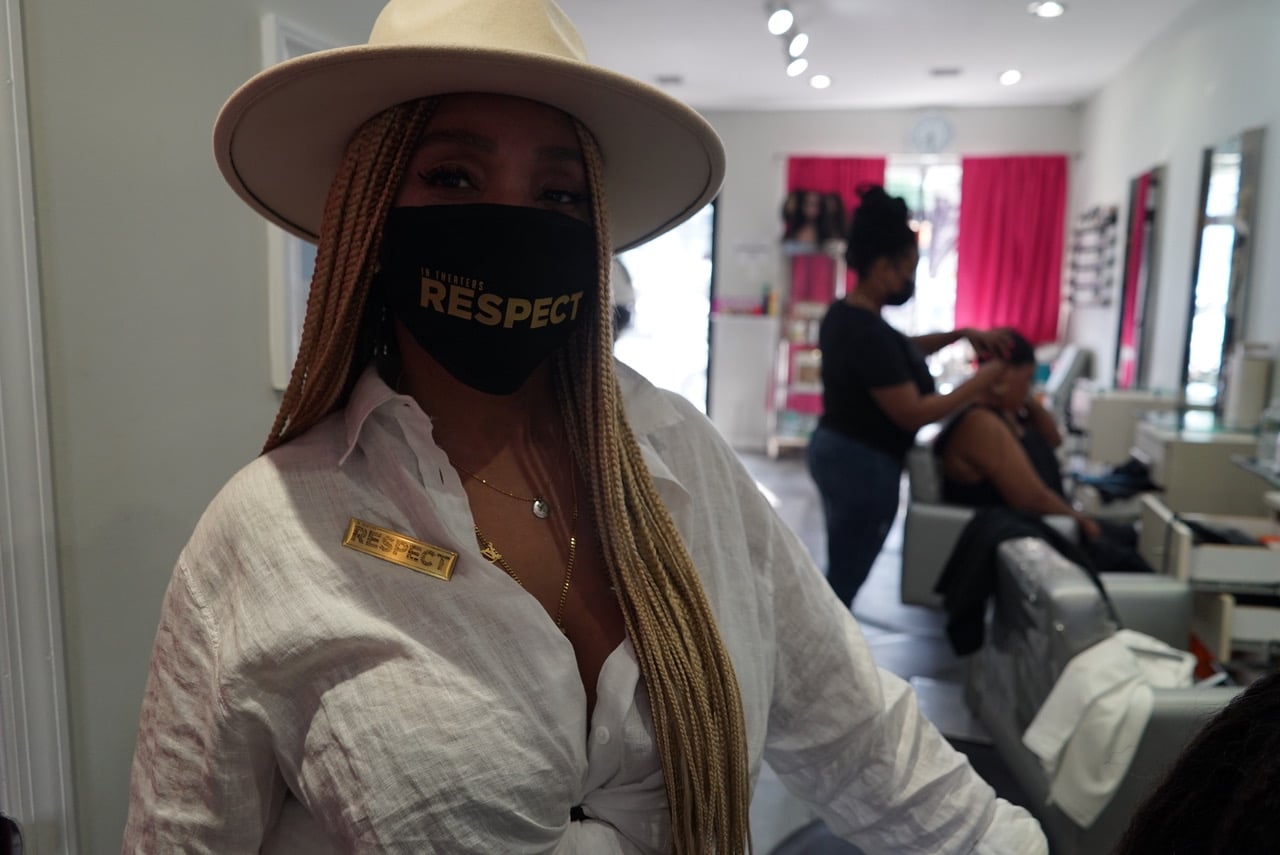 “Black people have an outside influence on the culture and the ability to redefine cultural norms,” said Shelton. “It’s a culture within a culture. [Hairstylists] don’t just shape hair; they shape the culture one style at a time, and for too long that’s been a blind spot. I want big companies to understand that when you promote movies and other products through [hairstylists], you’re not just promoting to the stylists that work there; you’re promoting through them as they are the tastemakers.”

The fact of the matter is, Black hair salon owners and stylists have large — sometimes millions — of followers on social media, and if brands and movie studios tapped in, the reach could be huge.

“There’s been no better time in history for movie studios to utilize the Black beauty salon to promote their movies. And the success of this rollout is proof that the Black salons and barbershops are still the incubators of culture, of Black culture, and most importantly that the women who work and gather there are more than worthy of the respect of these entertainment marketers,” Shelton said.

Tim Anderson makes magic at the Field of Dreams — The Undefeated