The average Black household in Polk County lives on $34,000 a year, about $30,000 less than the median household income for the county as a whole.

“It wouldn’t take us a moment’s notice to figure out what we could do with an additional $30,000,” Deidre DeJear, Financial Empowerment Center program director, said Tuesday afternoon during an online forum highlighting the wealth gap between Des Moines’ Black and white residents.

DeJear joined The Director’s Council, a group of local CEOs and organization directors, to outline targets for decreasing the wealth gap in Des Moines as part of the organization’s One Economy initiative. The group did not make specific recommendations, but outlined goals and asked Des Moines executives and organization leaders to think about solutions.

One Economy, which began in 2017, traces racial disparities in five areas: housing, education, employment, health and financial inclusion. DeJear said during the forum that the city needs to find “holistic” solutions because each of the five issues impacts the other. For example, students without stable housing are more likely to struggle through school, which in turn makes them less likely to land a high-paying job. 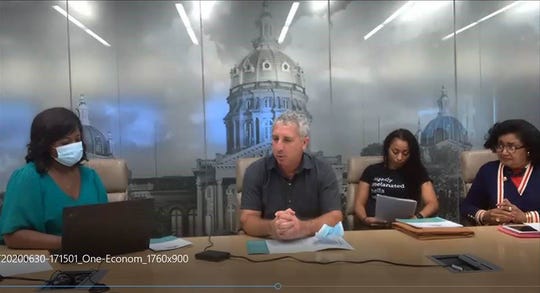 From left, Diedre DeJear, of the Financial Empowerment Center, moderates a panel with Philip Herman, Jasmine Brooks and Jackquie Easley with Lonnie Dafney on the phone during the One Economy Blueprint for Action town hall at the Des Moines Register on Tuesday, June 30, 2020 (Photo: Special to the Register from the Greater Des Moines Partnership)

Before the coronavirus pandemic shuttered many parts of the economy, Black residents in Polk County were five times more likely to be unemployed as other workers. The Black unemployment rate was 10.5%, compared to 2.7% for the county overall. Similar disparities existed throughout the state.

“We have to get people out of the lower-paid positions, get them skills, talent ready to enter a workforce,” Dafney said. “But that also then requires a company to come through. If we get the talent ready and available for you, that means they need to be hired for those positions.”

One Economy is funded by the Northwest Area Foundation, a nonprofit based in Minnesota that seeks to decrease the poverty rate.

At the beginning of Tuesday’s forum, Northwest Area Foundation President Kevin Walker said the coronavirus outbreak, as well as the Black Lives Matter protests that have swept the country since the death of a Black man in Minneapolis police custody, have energized community leaders to continue to decrease economic disparities.

“There is no more timely work I can think of as we try to rise to the challenges of 2020,” he said.

In addition to the goals for employment, the One Economy leaders outlined other benchmarks for Des Moines:

No degree? No problem. Tech firms move away from college requirement for new hires

Sage Steele Controversy – Why ESPN Removed Sage Steele From Programming For A Week?