0
SHARES
0
VIEWS
Share ShareShareShareShareShare
It’s not as if COVID-19 didn’t pose some serious concerns for Jason Johnson. But after nearly 20 years in business, the owner of Bob’s Classic Kicks in Midtown Detroit has been through a lot since opening in 2004, long before the city’s recent comeback. That endurance is something he’s proud of.

“Surviving all we’ve been through,” he says, recalling in particular the two-year QLINE construction that started in 2014. “We had a 40-foot hole in front of our door for a year.”

Johnson started the specialty boutique, at the corner of Woodward and W. Forest Avenues, because he felt the city needed a sneaker store. Besides, who better than him, a bona fide sneaker snob since learning what to look for in a shoe as early as the first grade.

Today Bob’s specializes in premium sneakers with lines ranging from Nike, Adidas, Jordans and Vans to Balenciaga, Gucci, Prada and Kanye West. They carry hats and apparel, too, and even sell Star Wars action figures. 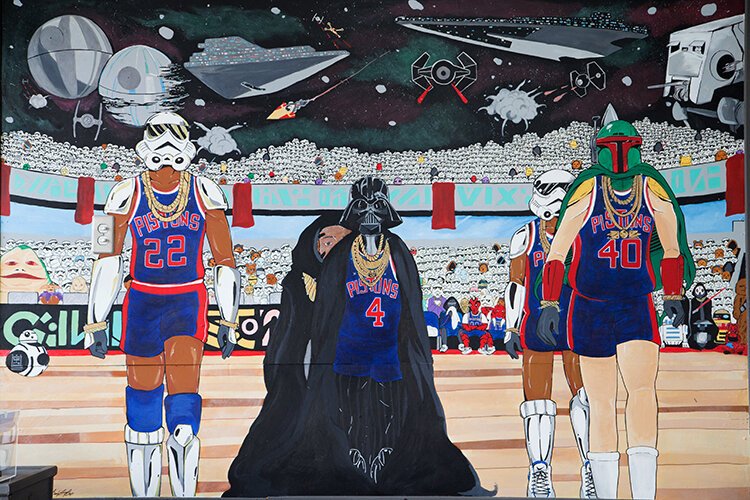 “As much as I’m an adult, I’m a nerd,” says Johnson, who turns 40 in April. To demonstrate “how bad I got it,” Johnson rummages through some shelving during a FaceTime interview to produce his own Luke Skywalker and Darth Maul action figures that have never been opened.

Bob’s also does good business reselling sneakers. “If somebody wants to get a couple dollars for their shoes, we buy them, turn them back to their exuberance, and put them on sale.” They might sell a pair for $120 that cost $200 new. “I told a man once: Who’s going to know you bought them used?”

Johnson also collects sneakers to give to the homeless, and added Bob’s Classic Prints to the business, too, where they offer heat screen and direct-to-garment printing. They can print whatever image someone wants, he says.

“We can make T-shirts in 13 seconds to match any shoes.”

It’s been a way to add value as well as diversify. He says the printing side sometimes makes more money than the retail business with customers that include a number of day care centers. 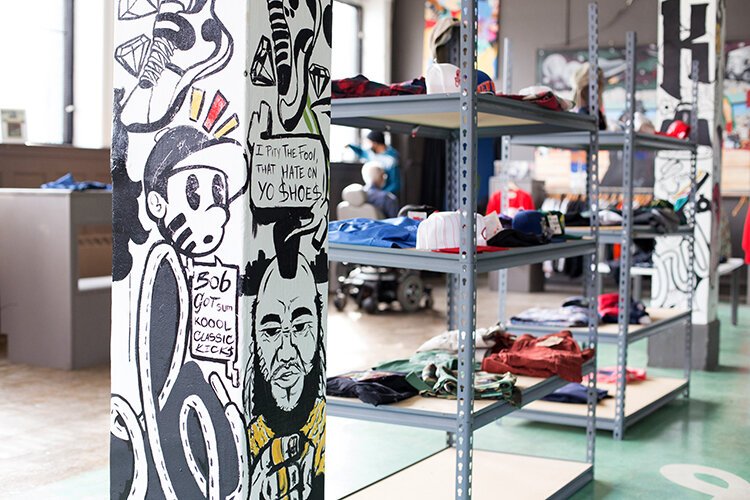 Bob’s also does special events with brands like Jack Daniels and music events with DJs. They display work by local artists and feature regular taco nights with his fiancé’s company, Nacho Mama’s Tacos. “It’s not just a shoe store,” says Johnson. “We provide an experience.”

One thing Johnson never worried about over the years was losing the business because he always had a full-time job. Since 2000, Johnson worked in surgical services, first at Henry Ford Health System and later at Children’s Hospital where he was a coordinator.

But then in 2019, Johnson retired after being diagnosed with multiple sclerosis (MS) an autoimmune disease that attacks the central nervous system. It affects people differently but can be debilitating and cause numbness, memory loss and vision problems. There is no cure.

Although Johnson did his fair share of asking God what he did wrong to have such a serious health challenge, he’s made some peace with it, he says. It’s had some effect on his vision and balance but he’s changed his diet and slimmed down. “It’s not progressive,” he says, adding that he believes it was brought on by stress.

Then of course came COVID-19, just as Johnson was focused on Bob’s full time. “It was a shock,” he says. And scary because for the first time he didn’t have a second income. “I’ve worked in medicine so I respect what is going on. I didn’t argue because I know the scary part.” 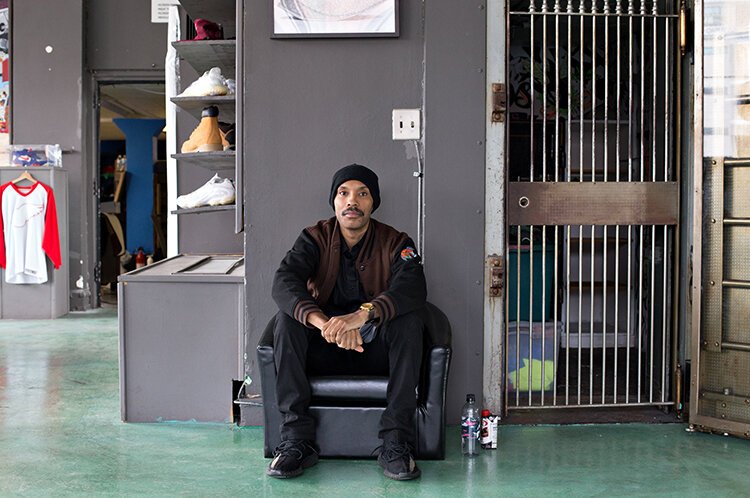 He also didn’t want to take any risks because of his father, Donald, who’s been by his side since the beginning and loaned him the money to start the business.

“My father’s 80 years old and I didn’t want a stranger to come and hurt my dad. He’s why Bob’s Classic Kicks is here,” says Johnson, who says everyone knows his dad as “Pops” because he’s always been a part of the shop.

Donald, who was scheduled to get his second vaccine later this month, says the pandemic hit them hard. “It really closed us down for a while. I was concerned.” He did what he could to help his youngest son. “I was down there every day,” he says. “I helped out with the sales or if the floor needed to be swept. I’m his dad. I’m here to back him up.”

Johnson, who says they’ve been open at least three days a week since the re-opening last year, applied for a variety of funding sources not sure what might come through. Then he got a couple of grants, from the Local Initiatives Support Corporation (LISC) and Detroit Economic Growth Corporation, which was enough to keep them afloat.

“It took stress off me as far as paying rent,” says Johnson. “I could concentrate on getting the proper sneakers. Otherwise I would have had to pinch some pennies.”

Johnson has always been good at making the most of what he had while giving back especially to kids. He’s kept his expenses down in terms of employees through a program with the Detroit Public Schools.

“We get about two kids a year though the program,” he says. “I try to explain to them what the sneaker stuff is. There’s a lot of hype around sneakers and sometimes dealing with companies. I try to teach them. Nike for instance. They’ll say: ‘All you can sell is this.’ I’ll say: ‘Why?’ It’s what they decided,” says Johnson. “I allow them to resell sneakers as well.”

Johnson was a kid himself when he learned what to look for. He recalls an older cousin taking him to the mall when was just five or six years old. “He explained that the sneaker doesn’t make you fresh, you make the sneaker fresh,” says Johnson. “I’d pick a pair of sneakers out and he’d like be like, ‘No, you don’t want them.’ That’s how I was trained.”

His mother also inspired his love for retail. She’d take him with her to Hudson’s and say: “We are going to shop till we drop.” 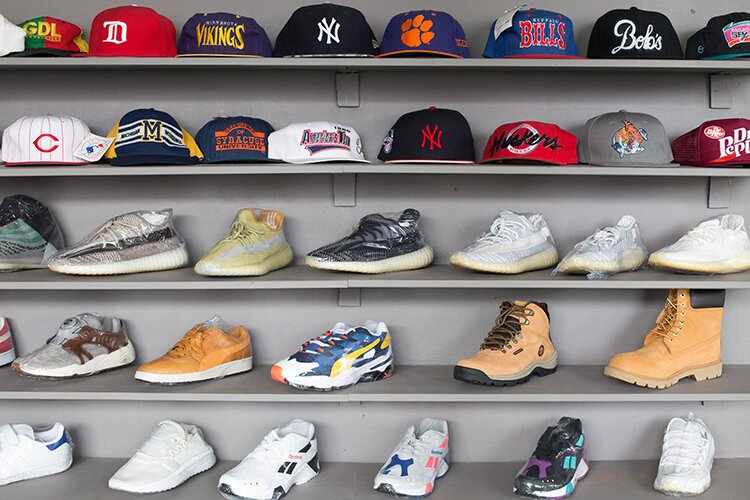 Years later, after Johnson and a couple of friends closed a cell phone accessory shop they had at Fairlane Mall to pursue other interests, Johnson decided to open what he thought was a much needed sneaker store in Detroit. When he confessed his dream to his dad one day at their kitchen table, he was shocked he said he’d help. But his dad  needed to see a business plan.

“I knew I had to get to it,” recalls Johnson, who was working at the hospital when he started reading books and getting advice on how to write a business plan which he presented to his father on Power Point. Donald, who says his role today is “adviser, overseer,” was impressed enough to loan him $30,000 and Bob’s was born.

“When I moved to Detroit it was the Cass Corridor,” Johnson says of his Wayne State University location, which he chose for the student population. “It didn’t make sense to be away from your demographic.” He was all about customer service. “If we didn’t have shoes they were looking for we’d order them.”

Of course, Johnson couldn’t know how hot the city would become, nor how the sneaker market would explode. By 2025, the global athletic footwear market is expected to reach nearly $100 billion, according to Grand View Research, Inc. Meanwhile, the sneaker resale market is forecasted to be $6 billion by that same year, says a report by Cowen & Co.

Johnson, who says they do about $100,000 a year in business, has always relied on his faith to get him through. “I remember when we opened up, this insurance guy was like, ‘You’re not going to make it a couple months.’ I was only 23, I said, ‘Bro, you’re kind of negative.’ And people were like, ‘Why did you open a business down here?’ One woman said: ‘You’re not going to be here in five months.’ I thought: What is wrong with people?”

More recently, he says, a man asked how he had the vision to choose his location. “I didn’t have a vision,” says Johnson. “I believed in God.” He says his grandmother, who had a house a few blocks from Bob’s that Johnson is renovating, used to tell him that God told her that he was going to build my business “but I have to get out of the way.” 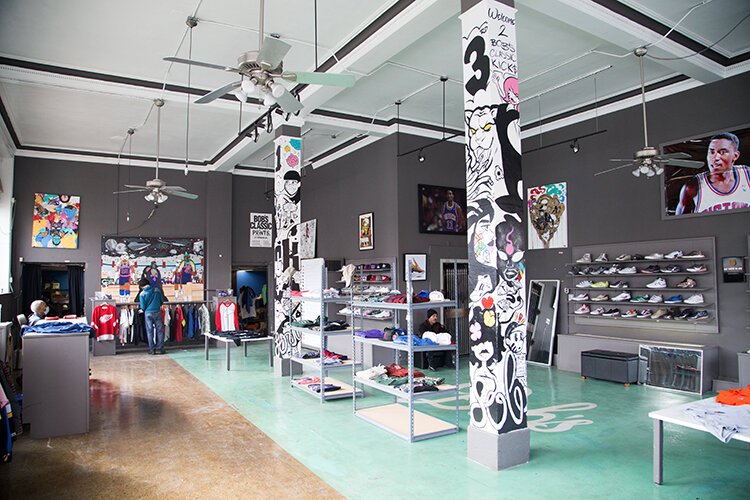 Today he considers what he’s learned from COVID-19.

“You’re going to have to change up how you save your money,” he says. “[Unexpected events] like this can happen and you have to be prepared, we weren’t expecting this.”

People surprised him, too. He says some folks who bought their first set of sneakers at his shop came by to support him. “They wanted to see if we were still there. ‘Just as long as you were here,’ they said. They [also] wanted to see Pops… Since we’ve been down there he’s become everybody’s Pops.”

Johnson has no bigger fan than his father. “I’m proud that we made it this far,” says Donald, giving props to his son as a businessman. “He respects everybody and he tries to help the kids.”

If Johnson has any advice for the next generation, he says, “They need a for-sure check while they start up.”

He’s got a new goal, too, educating others about MS. According to the National Multiple Sclerosis Society, of the roughly one million Americans living with MS, the disease affects African Americans and Hispanics in different ways compared with other ethnic groups.

“Nobody knows what they’re dealing with,” he says. “I tell kids: Don’t do drugs.” Johnson says he never did drugs and never even drank alcohol until he was in his late 20s and only then socially. “I try to live a healthy life.”

As he looks ahead to better things for 2021, Johnson is planning more events, maybe a concert for Midtown with local artists. “Keep doing cool things,” he says, proud that he’s still here. “Still making out, through COVID and whatever else came my way, through the blessings of God.” 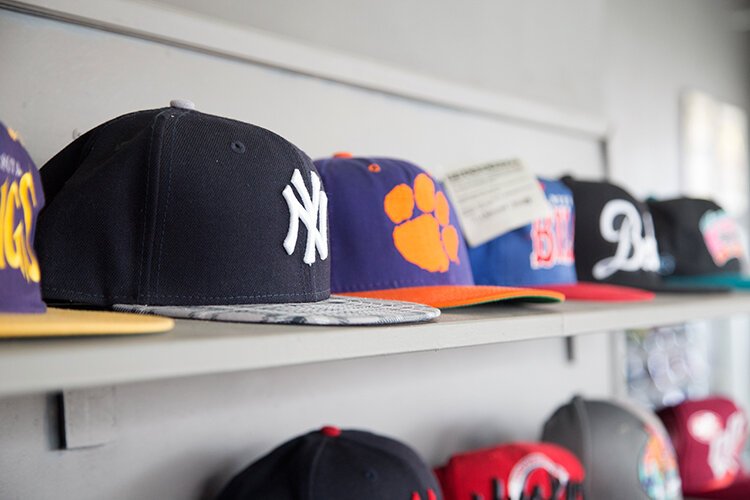 This is part of a series supported by LISC Detroit that chronicles Detroit small businesses’ journey in response to the COVID-19 pandemic.