Diversity, Equity and Inclusion in the United States

Private companies with 100+ employers are required to file EEO Reports (EEO stands for “Equal Opportunity Employment”) annually, which contain information about employee diversity. However, companies are not required to disclose this report publicly.

Our research team went to the websites of 4,200 of the largest businesses operating inside the United States looking for publicly disclosed statements on diversity, equity and inclusion (DEI).  Of these, we found 680 businesses (16%) that publicly disclosed their numbers. We created a uniform way to compare the data and categorized the results by industry.

Key findings are below, and an open data set is available to academic and non-profit institutions upon request.  We look forward to additional discourse and findings on the topic.  For the purposes of this report, we are referring to Black, Indigenous, and people of color (BIPOC) as someone identifying themselves as anything other than white.

Note: Our ongoing research into this topic will not be limited to women and people of color. We began our research with these groups because that information is most readily available; however, many Americans struggle with discrimination and underrepresentation related to their age, sexual orientation, gender identity, religion, physical ability, national origin, and more. We’re actively collecting data about the representation of these groups in the American workforce and will publish related research as soon as we can.

One way to examine diversity and inclusion is to look at an entire company’s workforce. In Amazon’s case, that would include everyone from the CEO to a warehouse employee.  When looking at employee diversity across 680 of the largest U.S. businesses, we found:

Another way to think about diversity and inclusion is to look at a company’s senior leadership, or highest-paying jobs.  We found that this tells a different story:

According to the most recent data from the Bureau of Labor Statistics, 57% of women and 38% of people of color are actively in the American workforce. Looking at the average representation across all of the companies in our research, the numbers seem encouraging. While there’s a gap for women – 44% representation in our study vs. 57% in the workforce – for people of color, representation rises to 43% (compared to 38% in the workforce). But if we look more closely, it’s clear that we still have work to do:

56% of companies are “well below” the national workforce level for women, and for people of color, it’s 47% of companies.

Where are we lacking diversity and inclusion, and why might there be such stark differences across industries?

If we look at representation by industry, the majority are well below the national average when it comes to female employees: 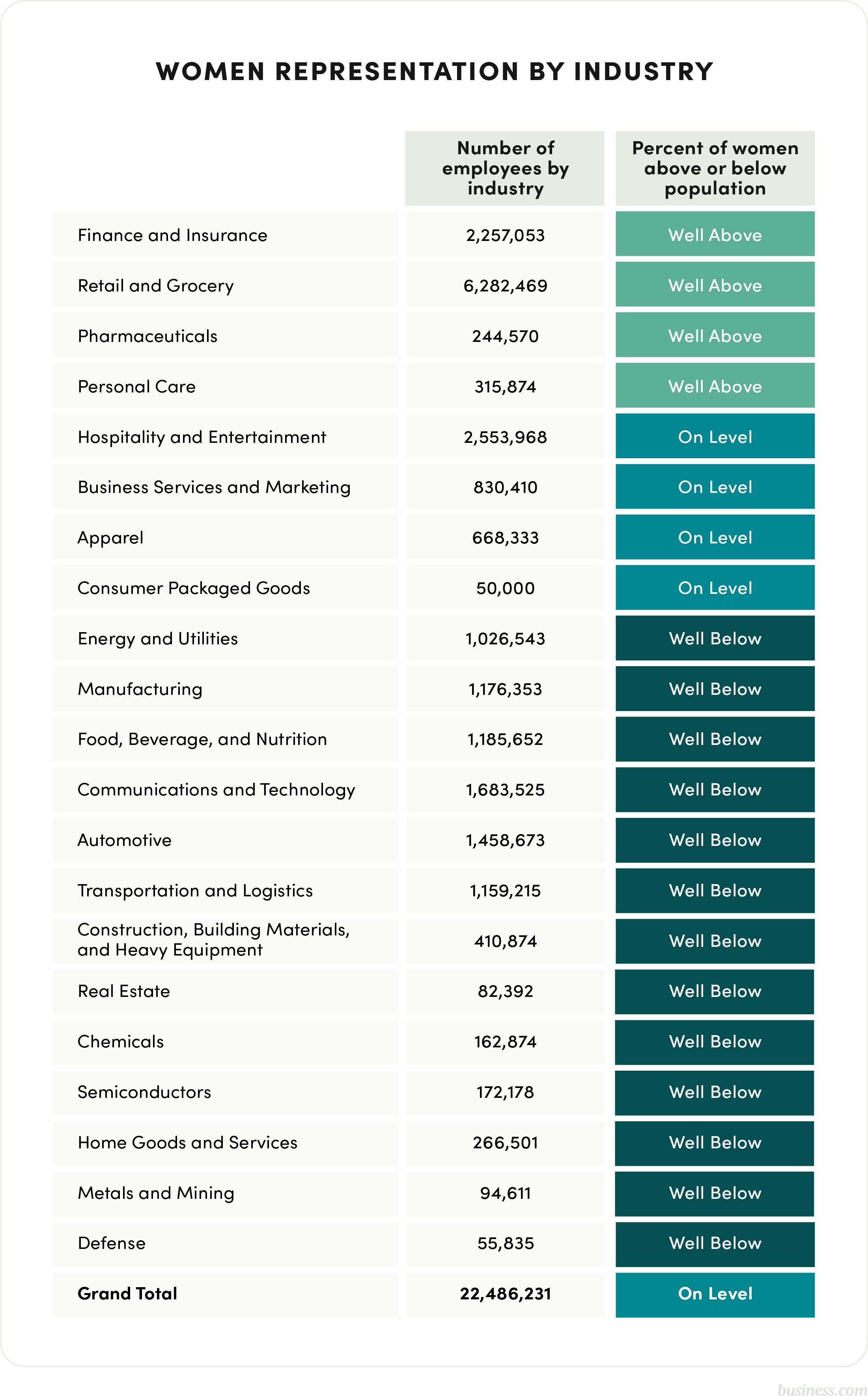 Many industries, such as construction, have traditionally been dominated by male workers due to physical requirements and subconscious gender biases. It’s estimated that only 2.5% of tradespeople are women, despite the fact that a diverse workforce is proven to significantly increase profitability. In industries like construction where jobs are expected to grow by the millions in 2022, a company’s team and bottom line would be well-served by heavier focuses on diversity and inclusion.

When looking at the data for people of color, representation improves but is still lacking in the many industries: 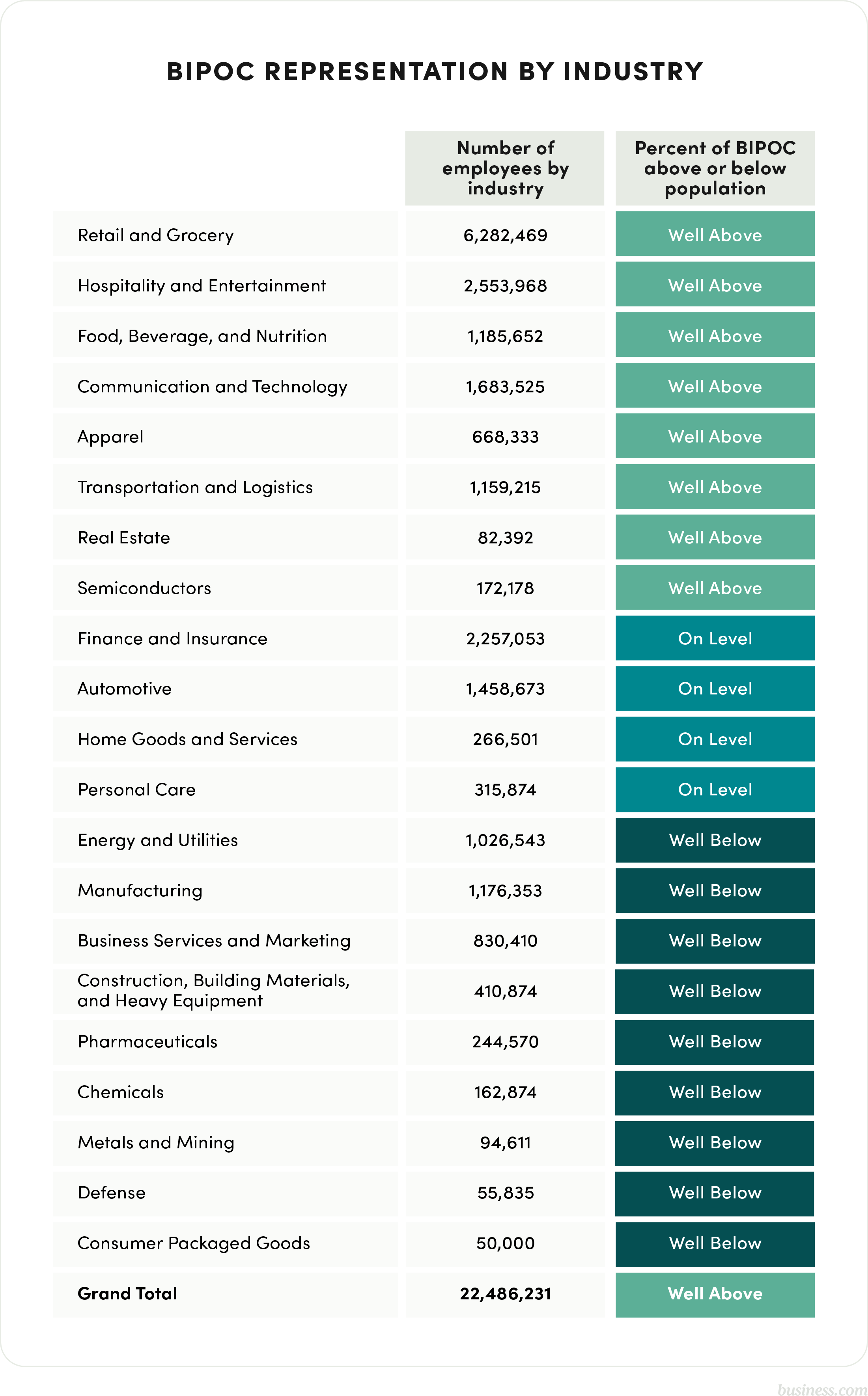 While many industries are doing well with representation – such as retail, hospitality, and apparel – they’re also the ones with the lowest-paying jobs and a noticeable lack of career advancement opportunities. For example, even though some companies like Walmart have recently increased their starting wage to $12/hour, that’s not a livable wage in any state in America.

People of color are also noticeably underrepresented in technical and scientific industries. It’s no secret that the tech industry in particular has struggled, despite many firms committing billions to DEI efforts over the past few years. A Wiley report found that 68% of tech companies struggle with diversity on their teams, and 64% of tech employees believe that people of color are discriminated against during the hiring process.

“In the last seven years, I’ve coached African Americans in the tech industry. One essential concern they expressed to me is feeling isolated in that there is not a lot of diverse representation in their organization’s leadership. It’s common, for instance, for some of the female engineers we work with to be the only woman on a team of 200 men. – Chantal Pierrat, Co-Founder of Emerging Human.

Diversity & inclusion efforts aren’t important solely for employee experiences, either. As technology advances and AI / machine learning efforts become more ubiquitous in the products we use, their effectiveness can be diminished by a lack of diversity. For example, lack of diversity can lead to issues with facial recognition that perpetuate racial biases, according to a 2019 federal study.

Lastly, representation shifts dramatically for both women and people of color when looking at who holds senior leadership positions. Diversity & inclusion efforts must be pushed and prioritized from the top down, and unless you have representation at all levels of your business, it’s unlikely you’ll make consistent progress in your efforts.

“Taking risks, speaking up, and reaching for promotions become harder when an employee is focused on fitting in versus moving up. This is the death of innovation. Tech growth is enhanced by innovation so it’s imperative to foster it. – Pierrat

Diversity is crucial because when people have different lived experiences, they bring different perspectives and insight to the table that would never be surfaced among a homogenous group of peers. It’s even more critical at higher levels of an organization, where decisions are made that cascade down and affect the rest of the team. However, the fact remains that in 2022, senior leadership teams across all industries continue to be dominated by white men.

To determine which roles qualify as senior leadership, we used their proximity to the CEO. These roles are typically other C-suite positions (COO, CFO, CMO) or business unit owners (president, general manager, vice president). We included positions within two reporting levels of the CEO. We found that major gaps exist across the board – the median for women on senior leadership teams is only 30%, and that drops to 20% for people of color. And in some industries, the situation is even more dire. 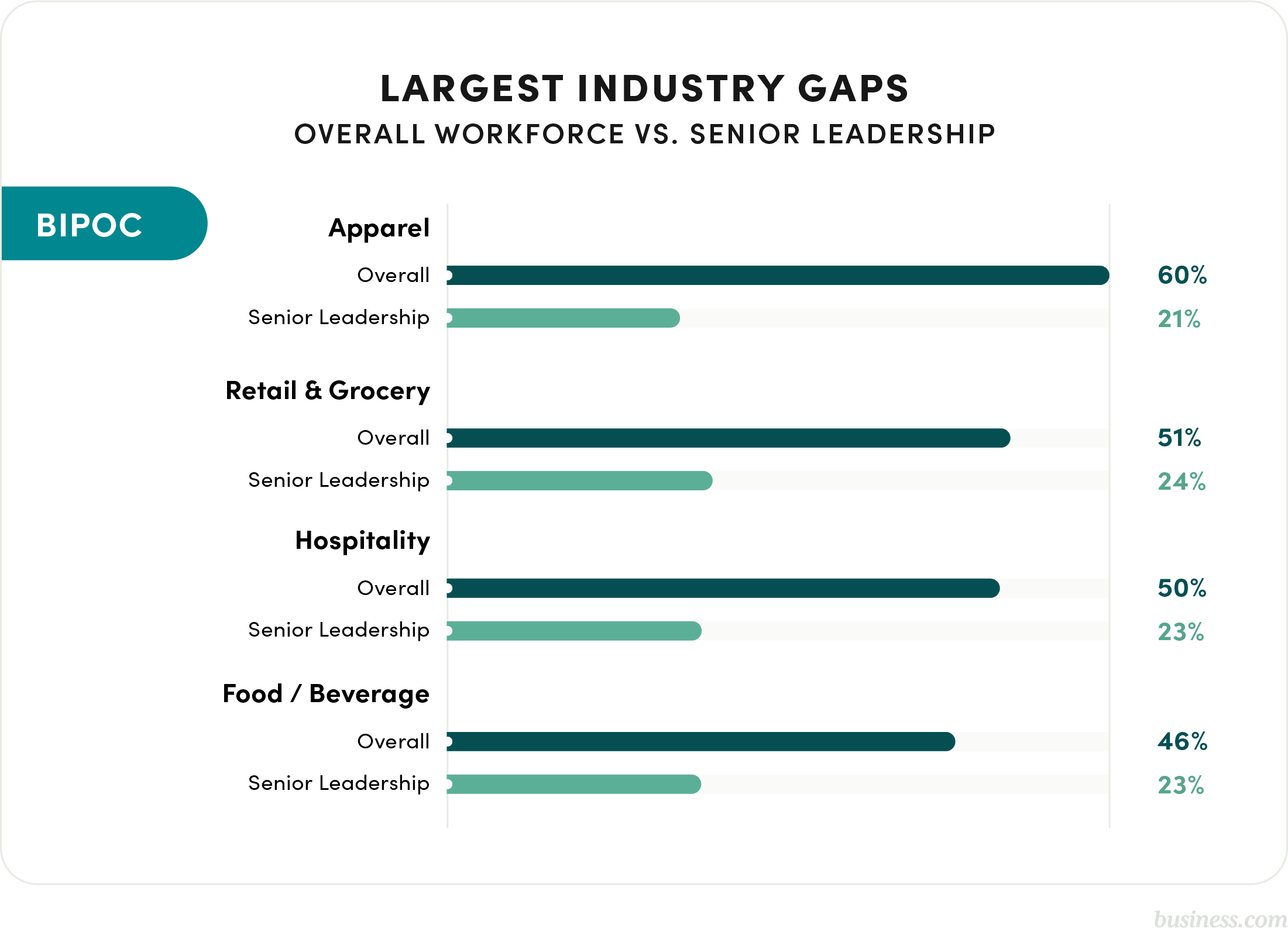 There’s only one industry where white males were not the majority of senior leadership, and that’s personal care for women. While this makes sense for this category –  82% of women prefer female-focused personal care products – it underscores the fact that we still have so much work to do at higher levels of organizations, especially because there’s a direct correlation between diverse leadership and better financial performance. 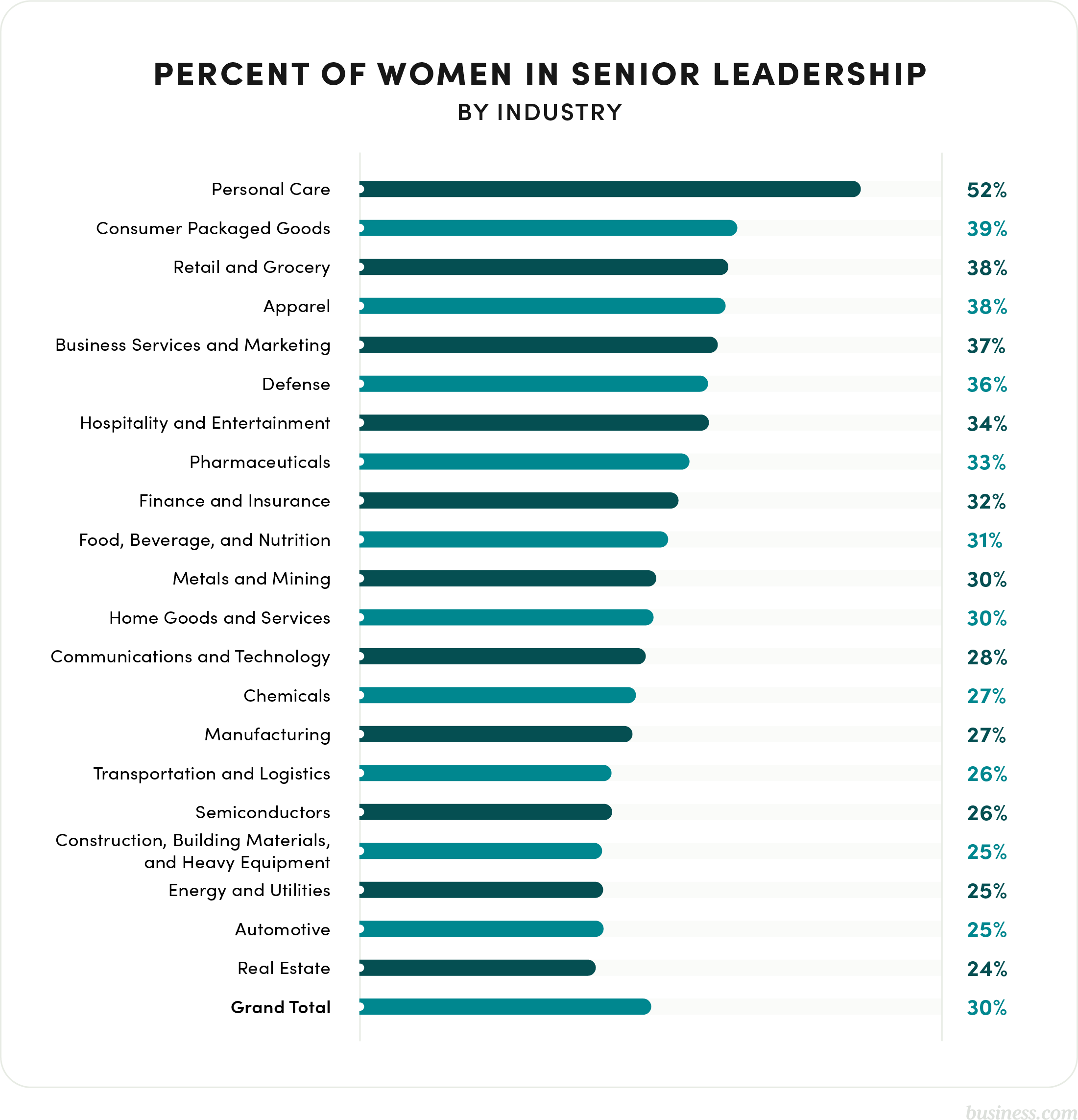 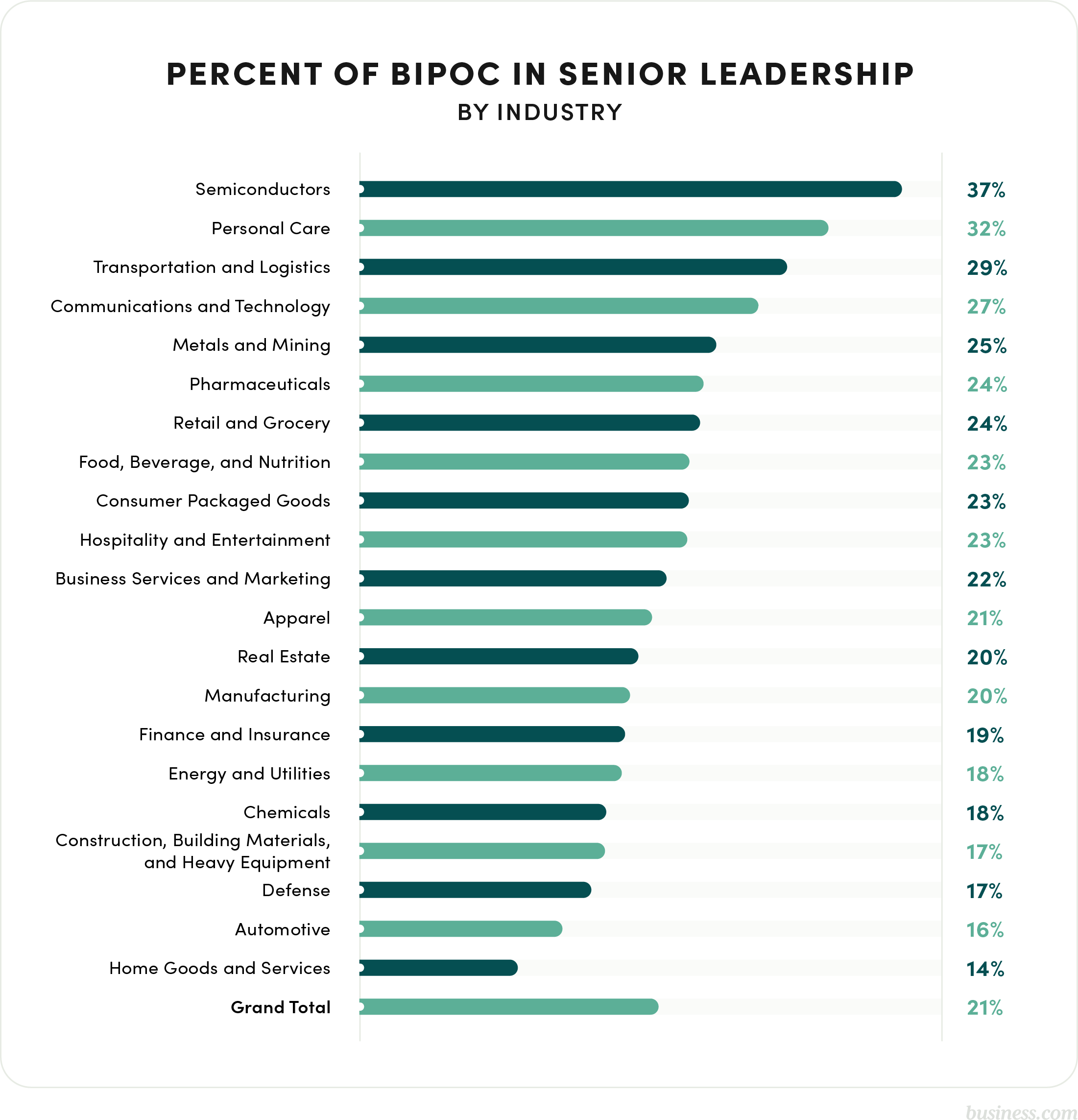 Galvanizing your diversity and inclusion efforts

“An owner or executive has two primary responsibilities—take the first steps by actively supporting DEI campaigns and then be prepared to learn on the journey. It’s the commitment to movement that matters. As CEOs, we are called to lead and to create momentum toward broad goals and directives. But how do we create momentum and direction if we are only standing still?” – Donald Thompson, CEO of The Diversity Movement