NNPA NEWSWIRE — “This is a remarkable day! A century ago, this was a thriving business, a thriving community. African American leaders were not only members of the community, but remarkable businessmen and women as well,” said Newsom. “The legacy of the Bruce family is also attached, I think, not just to racial injustice in our efforts to create a framework of reconciliation, but also economic justice and economic empowerment moving forward.”

California Governor Gavin Newsom offered his candid assessment about a range of topics during an exclusive interview with L.A. Sentinel Managing Editor Brandon I. Brooks.

The dialogue occurred on Thursday, September 30, following Newsom’s signing of legislation to return Bruce’s Beach to the descendants of the original owners of the resort (see story on page A-1). Brooks met with the governor on the Bruce family property in Manhattan Beach and questioned him on reparations, the recent gubernatorial recall and his future goals.

But prior to broaching those subjects, the editor acknowledged the significance of the “historic and momentous day,” where valuable land illegally taken from African Americans was finally being returned. Citing the local efforts of L.A. County Supervisors Janice Hahn and Holly Mitchell and State Senator Steven Bradford to give back the acreage, Brooks queried Newsom for his view about the occasion.

“This is a remarkable day! A century ago, this was a thriving business, a thriving community. African American leaders were not only members of the community, but remarkable businessmen and women as well,” said Newsom. “The legacy of the Bruce family is also attached, I think, not just to racial injustice in our efforts to create a framework of reconciliation, but also economic justice and economic empowerment moving forward.”

Newsom described the day’s event as moving “from symbolism to substance” in that an incident that occurred “generations ago” was being acknowledged and rectified. He added that he hoped the action would lead to local and state government “doing more and better.”

Brooks followed up by inquiring about the Reparations Task Force, which the governor signed into existence last year. Noting that the word “reparations” triggers strong emotions from advocates and opponents, Newsom was asked what motivated him to support the initiative. 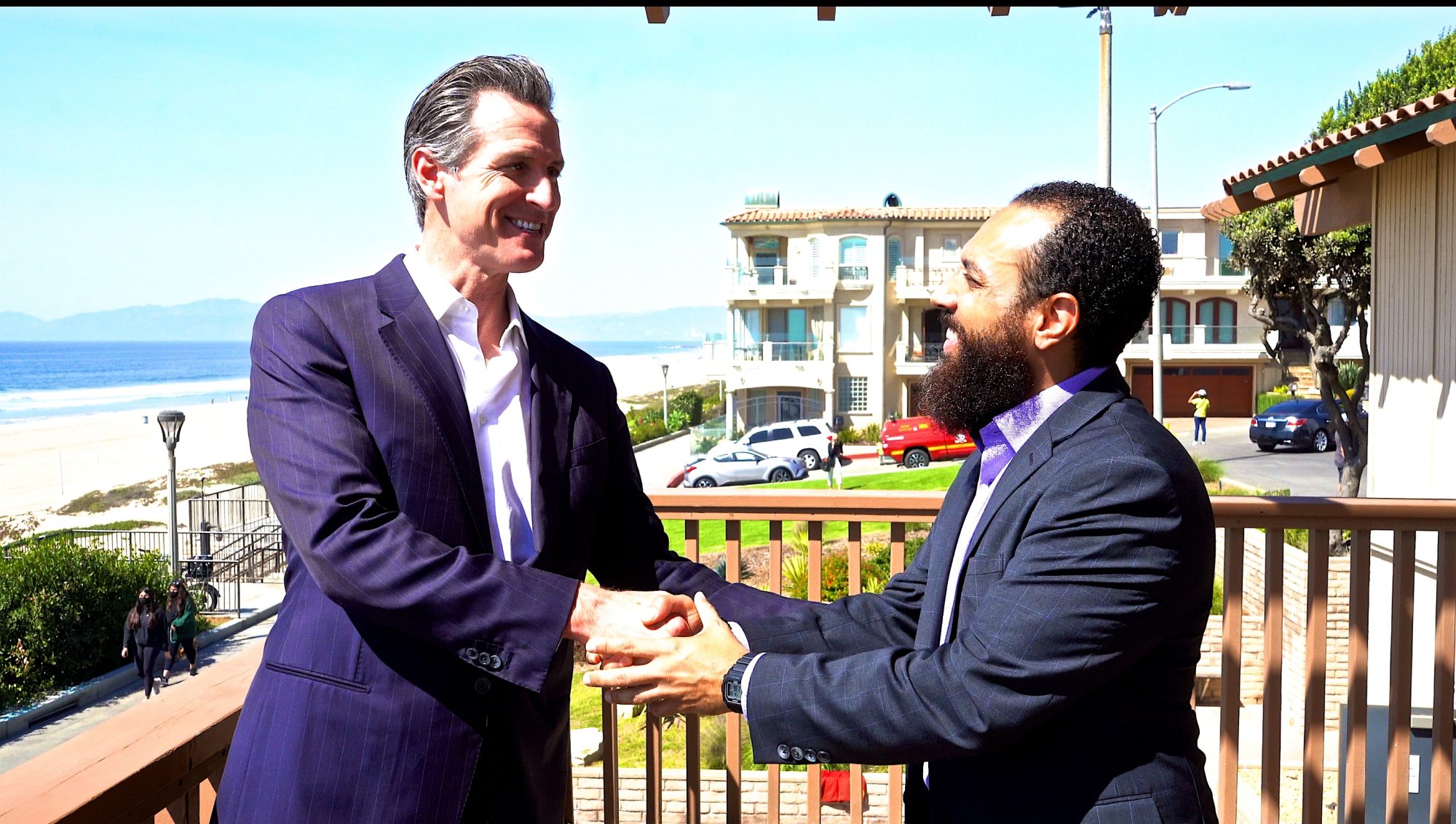 As for what reparations entails, the governor insisted, “No one has predisposed positions. We’ve got different definitions of what reparations are or what it looks like. They (the task force) will make recommendations and hopefully as governor, I’ll have the privilege of something landing on my desk that can move the needle further. But, at least we’re willing to have the tough conversation in a transparent and organized manner and not shy away from this.”

Bolstering his resolve, Newsom indicated his strong commitment to exploring the tough topic and fully expects that some people will not be supportive. Still, he intends to continue on this path, stressing, “These are hard conversations, but you have to have them if we’re going to be what we’re capable of being.”

The gubernatorial recall election was discussed next as Brooks asked Newsom what his message was to those African Americans who voted for him. Even though the governor squashed his Republican competitors with the overwhelming majority of California residents voting to retain him, the editor invited Newsom to share his thoughts about the experience.

“I appreciated the support, but I’m deeply humbled that we have an enormous amount of work to do. I know I still have expectations to meet. I’m deeply tuned in to the anxiety and concerns that the community has felt and the sense that while we say the right things, we’re not doing the right things. I heard that over and over again,” Newsom said.

“What I learned from the recall is that time is constrained. It’s such urgency, a desperation that people have. They want to see and feel progress. I said it on election night – democracy is not a football; it’s more like an antique vase. You drop it and it goes in a million pieces,” he asserted.

Whether or not a person voted for him, Newsom said he believes all Californians, regardless of political affiliation, share “fundamental values.” In his opinion, people want “to be protected, they want to be respected and they want to be connected,” and he hoped voters would recall the commonalities and not let politics “divide us.”

“This is a vulnerable moment. I feel a sense of responsibility to accelerate change, to take more risks without being reckless and to do the kind of things we’re doing today (returning the Bruce’s Beach property) with pride and conviction,” said the governor.

In addition to the Bruce family legislation, Newsom added that he signed another significant bill the same day. SB 586, sponsored by Sen. Bradford, empowers the state’s Commission on Peace Officer Standards and Training to invalidate an officer’s certification if the person was previously fired from a different police department. Also, the bill contains other activities that can result in the removal of a peace officer’s certification.

Although the recall is behind him, Newsom must still contend with a myriad of pressing issues facing California, remarked Brooks, who listed the top concerns as COVID-19 and homelessness. In light of those challenges, he urged Newsom to outline his focus in the future.

COVID and homelessness were areas that Newsom said his administration was already tackling before the recall, as well as housing affordability, educational disparity, climate change and environmental justice.

“It’s not just the achievement gap, it’s the opportunity gap. They aren’t just left behind, they start behind. We’re beginning to address those issues, focusing not just on income, but wealth and equality,” he declared.

Generational wealth and equality underscored the reason Newsom traveled to Southern California that day, Brooks said, which was to restore treasured beachfront property – estimated to be worth about $75 million – to the Bruce descendants. Prior to the signing, Newsom met with members of the family, an encounter he described as “profound.”

“It was profound because you’ll never make up for the generations of loss, what could have been. We don’t know, but we mark a present with hopefully a more, brighter future,” reflected Newsom.

“What mattered to me was not just their joy, but what this could mean to other families. We’re not dreaming, we’re doing.”

Visit lasentinel.net to view the interview of Gov. Gavin Newsom by Managing Editor Brandon I. Brooks.

Looking back at this week in history: Dec 5-Dec 11 | News for Fenton, Linden, Holly MI

Park City Museum welcomes ‘Images of Dignity, Hope, and Diversity in America’ with new ‘Black and White in Black and White’ exhibit

New COVID-19 variant cause for concern, not panic, Biden tells US