Newsom discusses issues such as the pandemic, education, economy, homelessness, criminal justice reform, and how the handling of those issues will dramatically change if the recall is successful.

As the California gubernatorial recall election approaches on September 14, Governor Gavin Newsom visited South Los Angeles to speak about how his administration has impacted the state, how policies since he was sworn in have and will improve the lives African Americans, and what the consequences would be if the Republican-led recall was successful.

Local Black politicians stood by Newsom’s side speaking highly of the work that he has done.

The most pressing issue of Newsom’s administration, which began in January of 2019, has been the COVID-19 pandemic.  Democrat led states have handled the pandemic dramatically different from Republican led states, and Newsom points out that if the recall is successful, California would have similar issues as those Republican led states.

While many Republican politicians have focused more on the economy than the pandemic, Newsom links the two issues together.

“Larry Elder wants to take us off that same cliff,” Newsom said.  “He said that before his first cup of tea after being sworn in as your next governor of the State of California, that he’ll use the power of an executive order to eliminate mask wearing in the State of California for our public (school) kids, putting their lives at risk, and putting their education at risk.” 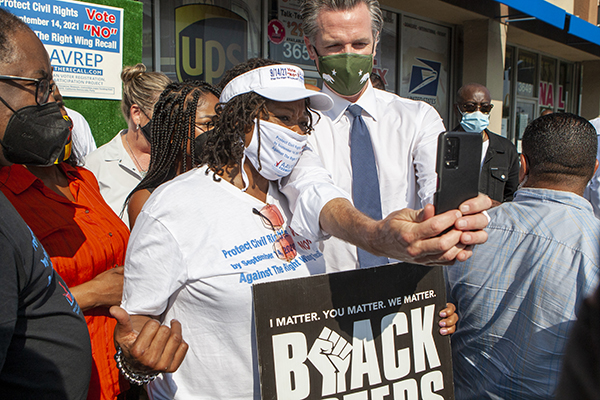 Newsom spoke about how California is at the forefront of many issues in this nation that impact middle and lower class people, and specifically Black people.

“I’m proud that we’ve led in so many areas,” he said.  “In social justice, racial justice, economic justice, and criminal justice reform.  California continues to lead.  No state comes close in maintaining that progress.  All of that is on the ballot.  If you think I’m exaggerating, just consider the prospect if we don’t vote no on this election.  You’ll have a governor that doesn’t believe in a 15 cent minimum wage let alone $15.  He doesn’t believe in minimum wage at all.  He calls food stamps a giveaway and at the same time he calls for an elimination of the corporate tax in America.”

The homelessness issue has greatly impacted Los Angeles, and city has been supported with state funds to house people and give them mental health services.

“We put $12 billion in our budget to deal with homelessness,” Newsom said.  That’s unprecedented in California history.  Mark Ridley-Thomas (Los Angeles City Councilmember) has been leading in co-chairing our efforts to get the state to do more.”

Education wise, Newsom said that the budget for public education is $123.9 billion.

“It’s unprecedented in U.S. history,” he said.  “It’s the largest public education budget that’s ever been put forth by any state in American history.

“Five billion dollars to fulfill the platforms of those who believe in not only after school for all but summer school for all.  For the first time in U.S. history, $2 billion so that every kindergartener can get a child’s savings account.  As much as $1,500.  This has never been done.  We mean business about creating the college going mindset.  But you don’t have to use it for college.  You can use it to start a business.  But more importantly it’s a starter account to get you focused on financial literacy and focus on doing something that the majority of their parent’s never imagined doing.  Half of their families don’t even have access to checking and savings accounts.  Everyone of their kids’ will have it in their own name.  This is a really exciting thing.  None of that is being promoted or supported by the alternates after this recall.”

Gun violence has been a major issue for Black communities for decades, and Newsom said that his administration is working to create stricter gun laws.

“We have been fighting hard everyday to deal with the revenges of gun violence, and we’re proud to stand up to the NRA,” he said.  To stand up to the gun lobby.  And to call out gun issues as public health issues.  This state has led the nation in those efforts, and we are proud of that.  Larry Elder doesn’t believe in any of those policies.  He actually wants to eliminate the assaults weapons ban.  He believes that we should have more weapons on the streets and sidewalks.  He doesn’t believe that there should be a waiting period to purchase guns.”

The governor has the power to appoint judges, which can have a major impact on issues that impact Black people in California.

Newsom spoke about programs that will impact renters who struggled financially during the pandemic.  He said that the state has set aside $5.2 billion to pay back rent and $2 billion to pay utilities.

“No state in America is doing this,” he said.  “None of that was promoted or supported by Larry Elder.  None of it.  And none of it will be implemented if he is governor.

“We have strategies, plans, and we’re just getting started.  And all of that ends… if we’re not successful.”

For more information about the recall election, visit www.vote.ca.gov.