His Criminal Record Disqualified Him From Receiving PPP. So He Pushed Back, and Got the Rules Changed.

His Criminal Record Disqualified Him From Receiving PPP. So He Pushed Back, and Got the Rules Changed.

When Troy Parker got out of prison in 2015, he wasted no time. He headed straight to the library in his hometown — Cincinnati, Ohio — to start the business he’d spent years of his sentence thinking about. “Prior to going to prison, I was, let’s just say, materialistic,” Parker says. “But in prison I saw how many people, especially African Americans, left and came back. They’d tell you they couldn’t get housing or a job, so they went back to crime or started using drugs. But in prison, we were running everything from the kitchen to the boiler — remodeling, painting, asbestos removal. So my idea was to have a company that hires returning citizens. In the lower-income community, there’s people who have mental health issues, or convictions, or who struggle with addiction, but they can still work. I wanted to remove the obstacles that keep those people out of the workforce.”

Since Parker founded Innovative Labor and Cleaning Services, he’s held fast to that mission. “If you don’t have transportation to the job site, we provide it,” Parker says. “If you don’t have boots to start working, we’ll give you the boots and take it out of your first paycheck. Most people who returned from prison or come out of rehab have mental health appointments, substance abuse appointments, PO appointments. So we make the schedule flexible. We’re not really a second chance company. We’re more of a third, fourth, fifth chance company, because many people come here and aren’t willing to change at first. They’ll leave, but four months later they come back and their attitude is a little different.”

By the end of 2019, the company had 120 employees. Parker was still operating on thin margins, bending over backward to make payroll, and turning down jobs due to cashflow issues, but the company made over $2 million last year. Then, in March, the pandemic hit. Right away, Parker applied for the PPP and the EIDL loans offered to small businesses as part of the CARES Act but was told he didn’t qualify for either. The SBA’s PPP rules disqualified anyone convicted of a felony in the last five years, or anyone on parole or probation. At the time, the SBA was automatically rejecting EIDL applications for business owners who had been convicted of any crime in the last ten years, or anyone who had ever been convicted of a felony. Because Parker’s conviction was a felony (fraud), and he had six months left of probation (out of five years), he was ineligible for both.

Related: A Leaked Powerpoint Suggests the SBA Is Denying Disaster Loans to Anyone Arrested In the Last 10 Years

Parker didn’t greet this news with a shrug. He wrote emails, he made calls, he connected with other business owners with criminal records. Through the Cincinnati African American Chamber of Commerce, he was connected to Ohio Senator Rob Portman (R), who heard Parker out, and said he would write a letter on Parker’s behalf to President Trump’s staff and the SBA. Parker also got in touch with Ohio Representative Steve Chabot (R) and Senator Sherrod Brown (D). 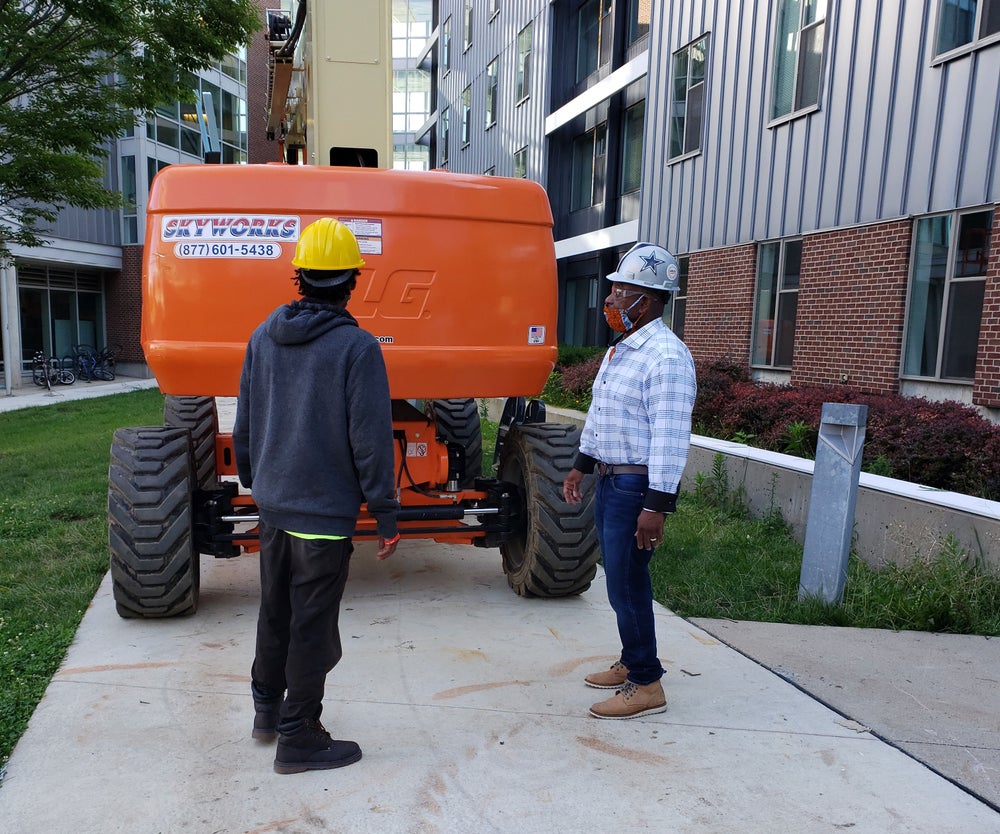 Across the country, bipartisan advocacy groups and politicians began voicing opposition to the SBA’s restrictive rules for small business owners with criminal records — pointing to the fact that these business owners had paid their dues. Plus, they were now playing a vital role in fighting recidivism, since many hire other people with criminal records who often struggle to find work.

Senator Portman was particularly keen on advocating for Parker. And incredibly, a week before the June 30 PPP deadline, the SBA agreed to change the rules, making parole and probation no longer a disqualifying factor (unless the parole or probation started in the last year). Even with the rules changed, there were a shocking number of bureaucratic roadblocks and hoops to jump through. But Parker got in his PPP application at the literal final hour, and ended up receiving both the PPP and EIDL loans. With that money, he’s been able to bring back many old and new employees. Plus, he’s been able to start taking jobs they couldn’t before due to cashflow concerns.

Parker is humble about his contribution to fighting for fair treatment of entrepreneurs with criminal records. But we think his tireless initiative is how change happens, so we included him as one of the 137 inspirational entrepreneurs on our July/August cover, which you can read about in Jason Feifer’s editor’s note. Since the issue came out, we’ve been following up with many of the entrepreneurs we featured. Here, Parker spoke a bit more about how he sees Innovative Labor and Cleaning Services’ role in the fight for equitable treatment of returning citizens, how it took a village to get his PPP funds, and some of the day-today difficulties he’s overcome while running a business during the pandemic.

When you started Innovative Labor and Cleaning Services, what did you see as the company’s mission?

Parker: Our mission has been to assist and help convicted felons and people that society has forgotten. People just like me. People who need patience, understanding and structure in their lives.

When the pandemic hit, what kind of effect did it have on you and your more vulnerable employees?

Like for so many small business owners, the pandemic took its toll financially and mentally. I have a responsibility not only to my business, but also to my team members and the families they help to support. While challenging, COVID-19 also gave us the opportunity to be creative and innovative. We found new ways to generate revenue.

What were some of the ways that you went about supporting your employees?

At Innovative Labor and Cleaning Services we’re a family, and that means:

We’ve tried to help our employees by making it clear that:

What were some of the things you learned throughout that journey of advocacy that surprised, saddened, or gave you hope?

Senator Rob Portman and Congressman Steve Chabot, who are both Republicans, had a thorough knowledge of justice reform and understood the problem of continuing to punish people who have made a mistake in life. We talked, and together we came up with workable solutions and insights. Senator Portman became a true advocate for my business.

In the end, after months of tireless advocacy, you ended up receiving the PPP and the EIDL loans. Do you think that this was because of the work you did in drawing attention to the problem?

I may have brought light to the plight of returning citizens when it comes to PPP loans, but it was the work of many leaders in government and the Cincinnati community, who collaborated and did what was right for individuals and business owners with situations similar to mine. After Senator Portman got the rule changed, the next problem was that the form on the SBA website still had the old rule. So, Nan Cahill and Susan Cox from Senator Portman’s offices had to contact the SBA to get the form with the right changes on the website, and this was happening two days before the deadline. With one day left to go they got the application on the SBA website updated.

Related: The SBA Gives $6.8 Billion in PPP to Business Owners of Color

Then, Nicole Pahard with the Cincinnati SBA office connected me with Jerome Davis in the SBA Columbus office to find a bank that would work with me, because mine had stopped taking applications. I was put in touch with Alene Cunningham with Telhio Credit Union. This is big because I didn’t bank with Telhio. Most banks or credit unions were not helping non-customers. Alena Cunningham located my application and saw it through to completion. Of course, she didn’t have to do that, but I was most grateful for her help. So that’s how I got the PPP loan. It took a lot of people’s help.

Since you received the PPP and EIDL loans, what has running the business been like?

Once we got the loan we got creative by first going into the community and finding individuals who were willing to work. Some people are scared due to the virus, and others are happy collecting unemployment unless they can make more working. But there are many who want to work and have obstacles like transportation or flexible schedules due to children being home. We realized that other companies must be having the same issues getting help.

So, we began marketing to companies in all industries that have a need for laborers. We’re now able to supply large amounts of labor due to having a huge pool of workers. We have 77 employees, up from 52 in June, with a pool of 134 skilled and unskilled teammates available to work.

Looking to the future, are you optimistic that the SBA and banks will stop restricting access to loans and resources for business owners with criminal records?

Opening PPP loan access to business owners with criminal records is certainly a step in the right direction. In recent years, we’ve seen the Ban the Box movement and employers having a more informed understanding on why hiring returning citizens makes good economic policy. We’re not where we need to be, but I’m encouraged by efforts being made to help those who have paid their price to society and are now looking to lead successful and fulfilling lives.

Related:
His Criminal Record Disqualified Him From Receiving PPP. So He Pushed Back, and Got the Rules Changed.
U.S. Black Chambers Celebrates Juneteenth’s 150th With Launch of byblack
How This Tech CEO Is Leading His Company Through Racial Unrest


This article originally appeared on entrepreneur.com