78th ANNUAL GOLDEN GLOBE AWARDS — Pictured in this screen grab: Daniel Kaluuya, winner of Best Actor in a Supporting Role in Any Motion Picture for “Judas and the Black Messiah”, speaks at the 78th Annual Golden Globe Awards on February 28, 2021. — (Photo by: NBC)

On May 10th, NBC announced that it will not be airing the Hollywood Foreign Press Association’s 2022 Golden Globe Awards. The reason behind this decision is HFPA’s continued inability to provide diversity and inclusion.

“Change of this magnitude takes time and work, and we feel strongly that the HFPA needs time to do it right,” NBC said in a statement, per Deadline. “As such, NBC will not air the 2022 Golden Globes.” The network says it hopes that by 2023 it’ll feel right about picking the show back up again.

On February 28, 2021, while covering the Golden Globes Awards—virtually—I reached out to the Hollywood Foreign Press Association (HFPA) to explore some of my ideas on how to approach their gross lack of awareness as it relates to diversity and inclusion.

I used the basic “contact us” section on the HFPA’s website. In that space, I detailed my extensive experience in the entertainment industry and expressed my desire to connect their organization to the Los Angeles Sentinel/LA Watts, founded in 1933 by Leon H. Washington Jr. and the New York Amsterdam News founded in 1909.

To my surprise (and then, delight), during the Golden Globe ceremonies Gregory P. Goeckner, COO and general counsel, Hollywood Foreign Press Association responded. He thanked me for reaching out and wrote that he would be in contact. I waited but his email never came.

I’m still very keen to be part of that discussion. I write for the Los Angeles Sentinel (started in 1933) and the New York Amsterdam News (started in 1909) and feel that we have a very strong sense of history and point of view that would provide help in a short term and more importantly a long term way.

I’m also Afro-Latina and a former member of IATSE LOCAL 600 (a unit publicist).

Mr. Goeckner responded with this email:

Lapacazo – thanks for reaching out again. We have been very busy putting into place a program to reform the Association and apologize for not responding more quickly. I will reach out to talk to you as soon as I am able

That was Mr. Goeckner’s last email. He did not reach out again and no, I’m not surprised by the outcry brewing for HFPA. I saw it coming with 20/20 clarity.

Remember, I first reached out to HFPA (during the Golden Globes) before this misstep -https://variety.com/2021/film/awards/hfpa-golden-globes-response-black-journalists-1234932905/. HFPA Adding 13 Black Journalists is ‘Tokenism’ and Offensive – Variety

HFPA doesn’t know anything about our community, and I honestly, just wanted to connect HFPA with the combined wisdom of 200 years: the Amsterdam News (1909) and the Los Angeles Sentinel/LA Watts Times (1933). When you stand back and linearly look at things, their organization is very young, only 77-years-old (1943) and the Golden Globes themselves are only 76-years-old (1944). So why would such a baby organization not want to listen to connect with 200 years of expertise? Does anyone need a brief history lesson on how African American and other Brown people were treated in 1943? Racism like a bad stench of rotting flesh, still lingers in the country, especially in California and especially in Hollywood and the entertainment industry. That rank odor is becoming unbearable and utterly unacceptable.

To date, Mr. Goeckner has not accepted this offer to listen to 200 years of combined wisdom and so this backlash and righteous cry for equality and this building momentum against HFPA doesn’t surprise me, at all. There is something rotten at the roots, something dangerously weak at the very the foundation of this organization and the few crumbs they are tossing from the proverbial table isn’t going to fool or satisfy a more enlightened community.

And it comes down to money. Hollywood is a business. It’s only “show business” for the consumers of their product. Make no mistake it’s always been a business — show and these mostly little-known journalists profited considerably from the annual Golden Globe telecast.

African-American Hollywood — please, wake up and stay that way. What does it mean that NBC will not air the Golden Globes in 2022? 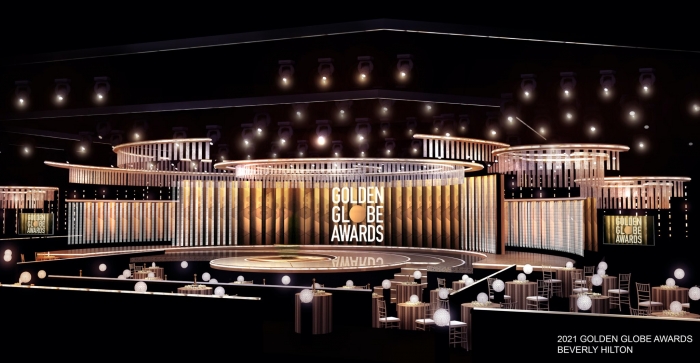 In a very well-written exposé by the Los Angeles Times, they examined the organization’s questionable financial practice and shined the light on their appalling record on diversity and representation (including an entire lack of African, African-American members). At the time, they had 87 journalists who annually vote and allegedly they shared in millions of dollars, and according to the article, members are paid an additional $2.15 million above and beyond their journalistic salaries (if any) to serve on various associations “committees.”

The Times went to the heart of the matter which is money, asking “Who is really behind the Globes?” and the money trail leads to
NBC, which in 2018 agreed to pay $60 million for broadcast rights but it doesn’t stop there because there are a lot of pieces making this machine run. “Winning” a reward is expensive with the cost of advertising and other related marketing costs reaching into the millions. The average PR consultant, for example, to create and guide a campaign hovers around $45,000, with bonus incentives ranging to about $20,000 if a nomination is secured and another $30,000 for a winner.

Like many in Hollywood, I say that HFPA’s reforms are misguided “window dressing,” and a coalition of more than 100 publicity agencies said they would continue to withhold access to celebrities. Amazon Studios, Netflix, and WarnerMedia have also distanced themselves from HFPA until there are some real changes in place. Tom Cruise handed back his trophies and Scarlett Johansson has spoken out.

But what side is African-American and Brown Hollywood standing on this issue? Where do you think? We are woke, folks. Even before the 2021 Golden Globe ceremony aired, in February, Ava DuVernay, Sterling K. Brown, and others of note called HFPA out on the lack of diversity on the HFPA voting board. Out of 87 members, not a single one is African-American.

There is something that White America will never understand about African-Americans — and I mean — never, and that’s our ability to forgive. If “we” had done to them, what was done to us, they would never recover, forgive or even attempt to move forward. But there is something so magnificent in our people, a spark of life and an adrenaline surge of will that we possess, that provides us with the strength to smash trauma, remove obstacles, and to re-invent. We are magical.

And it is with that spirit of wanting to be a part of positive and lasting change, that helps us all, I again reach across the proverbial table to HFPA members, and Gregory P. Goeckner, COO and general counsel, Hollywood Foreign Press Association, offering to connect them with key members of the Amsterdam News and the Los Angeles Sentinel/LA Watts Times so they can share their 200 years of wisdom in the magical art of lasting re-invention.

HFPA Now Scorched By WarnerMedia Top Execs Over Anemic Reform; HBO & Others “Will Continue To Refrain From Direct Engagement”