Imitation is Not Flattery: A Review of Arvie Smith’s “Call and Response” at Monique Meloche Gallery

Walking into Arvie Smith’s latest exhibition, you must be okay with being uncomfortable, as immediately upon entry, visitors encounter Black subhumans with ash skin, bug eyes, and swollen red lips that haunt them from canvas to canvas. This disturbing imagery constantly shifts in form throughout the exhibit like apparitions, but most people familiar with American entertainment history know the real-life ramifications these cartoons had on Black Americans. Eighty-four-year-old painter Arvie Smith uses his work to remind us of these ramifications and maintains that not only can they still be felt in the present, but that they must be confronted rather than left in the past.

Marking the Portland-based artist’s first solo exhibition at Monique Meloche Gallery, “Call and Response” features nine oil paintings that present an overwhelming visual history of the discrimination and mockery Black Americans have experienced since the days of slavery. Swarming every corner of Smith’s works are minstrel-era imagery and Jim Crow propaganda previously used to strip African Americans of their humanity. Underlying every painting are warm undertones of red and orange, but to define this collection of works as “warm” is not strong enough. These undertones give Smith’s interpretations of Sambo, Aunt Jemima, pickaninnies and other racist figures a scorching quality. The longer I looked at Smith’s works, the more I felt the imprints of these caricatures searing themselves into my mind’s eye.

The white people in Smith’s work also possess inhuman qualities. The painter warps proportions to give a white slave owner oversized hands to emphasize his brutishness and dresses a white woman with cornrow braids in a jacket made of brown skin. Smith offsets his painting’s vulgar content with an irreverent sense of humor. Look closely at “Bacchus” (2022) to spot Donald Trump and a crow named Jim wearing matching caps amongst all the other figures celebrating at an otherworldly parade. 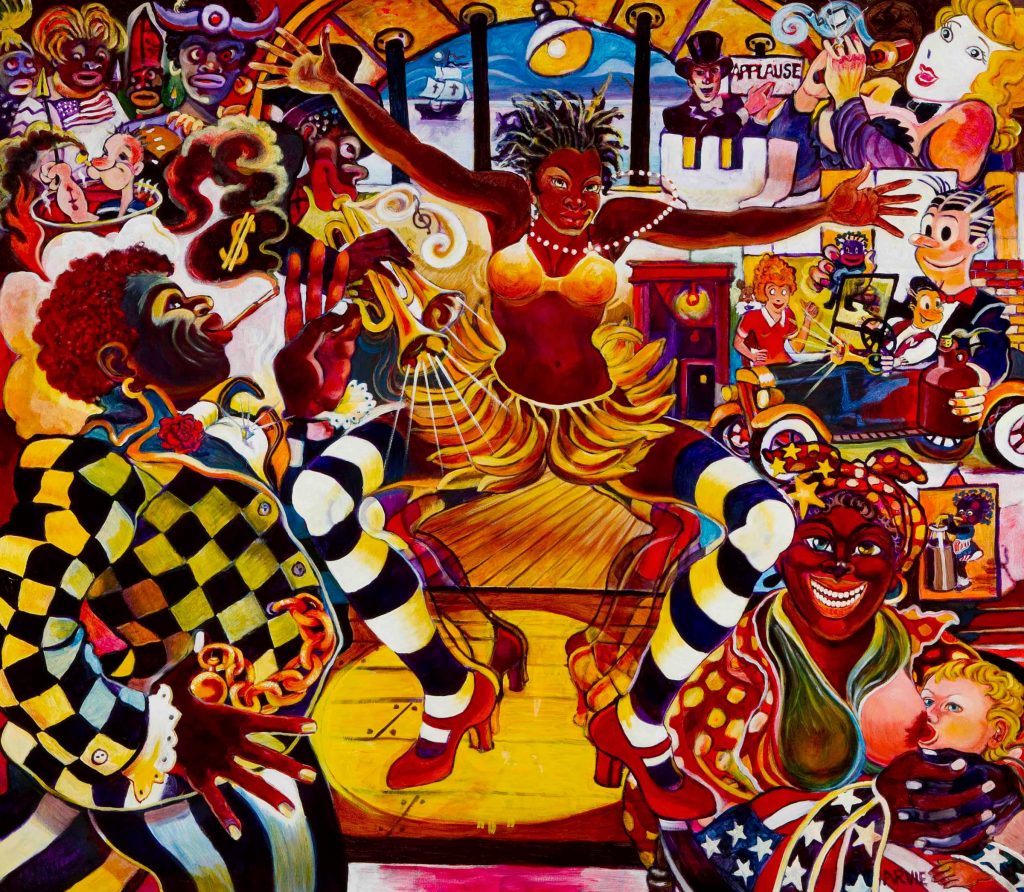 Like the exhibition title suggests, “Call and Response” does not exist just to be observed—rather, the show literally directs its gaze toward the viewer to invoke their reaction. Maintain eye contact with the tar-colored Black woman in “Strong Man” (2019) while she tries to cover her naked body with a small piece of cloth because you are the one she looks to as her white master clutches his whip fiercely in a firm fist. Upon the realization that you cannot help her, you move on to see the white mob in “Manumission” (2006) looking not at the dangling legs of their lynch victim, but at you. Their recognition of your presence automatically involves you as a complicit bystander in their heinous hate crime.

As much as “Call and Response” functions as a call for accountability, it also upholds the richness of Black culture, which continues to evolve regardless of any attempts to parody it. Black instrumentalists appear throughout Smith’s paintings, blowing trumpets, playing violins, and making music despite the ugliness that surrounds them. In “Honkie Tonk” (2015), the Black dancer on stage, dressed in a banana skirt à la the Black entertainer Josephine Baker, performs despite the mammy in the corner who poorly imitates her facial features. Smith’s exhibition stands to show that the beauties and the tragedies of the Black experience cannot be separated and that one can never diminish the other.

“Call and Response” at Monique Meloche Gallery, 451 North Paulina. On view through November 5.

Why Is There Still the Misconception That Black-owned Beauty Brands Are Only for Black People? – WWD

Why Is There Still the Misconception That Black-owned Beauty Brands Are Only for Black People? – WWD

Isla Fisher heartbroken over death of her dad Brian | Entertainment