What I’m Hearing: LeBron James reacts to the shooting of Jacob Blake and says change starts and ends in November.

Toronto Raptors’ Fred VanVleet wonders if a boycott of games is necessary.

“What are we willing to give up?” VanVleet said Tuesday, suggesting his teammates talked about the possibility of a boycott. “Do we actually give a (expletive) about what’s going on? Or is it just cool to wear BLM on the backdrop or wear a T-shirt? What does that really mean? Is it really doing anything? I don’t have the answers for you today.”

Blake, a 29-year-old Black man who lives in Kenosha, Wisconsin, was shot multiple times in the back by police officers Sunday while he was leaning into an SUV. Police were responding to a domestic dispute call. Blake is in stable condition, paralyzed from the waist down, according to his father and Ben Crump, the family’s attorney. Blake was unarmed. Three of his six children were in the car when the shots were fired.

“There is an emphasis in this country on the framing of these incidents such as Jacob Blake – ‘Well, he was a convicted felon. Well, he had a history of police brutality. Well, he possibly had a weapon.’ This framework is not unfamiliar to people of color and African-Americans. Nor does it constitute death or being shot seven times,” Brown said.

“The reality is a majority of African-Americans and people of color have history with the police. It comes with systemic oppression, lack of education, economic opportunities and housing, etc. Most people of color, most minority communities have an issue with police. The question that I would like to ask is does America think Black people and people of color are uncivilized savages and naturally unjust? Or are we product of the environment we participate in? That’s the question I would like to ask to America and America has proved its answer over and over again.”

NBA players are struggling with yet another shooting as they try to play postseason games inside a bubble near Orlando, Florida, amid the coronavirus pandemic.

“You know, it takes away a little bit from the social injustice and everything, especially prior to the season in the restart, you see there was a lot of momentum on Black Lives Matter and try to fix the corruptness in our society,” he said.

“And obviously it did take away from it especially after games, all you want to hear about is kind of what we thought about the game. And everyone in the country, they want a ‘break’ from the social injustice part of our society. But that can’t happen.” 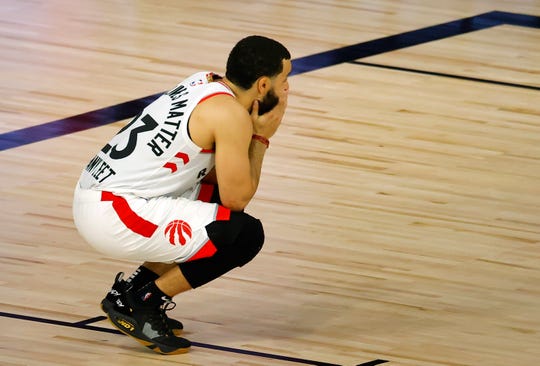 VanVleet said he was excited about his team’s first-round victory and playing Boston in the second round until “we all had to watch Jacob Blake get shot so that kind of changes the tone of things and puts things in perspective,” he said.

“That’s all that’s been on my mind. Coming down here and making a choice to play was supposed to not be in vain. But it’s starting to feel like everything we’re doing is just going through the motions and nothing’s really changing and here we are again with another unfortunate incident.”

LEBRON: ‘We are scared as Black people in America’

Players did not expect change overnight. But it’s clear they were hoping not to answer questions while in the bubble about another Black person getting shot.

“Anything that my name is attached to is going to be put out and we want to do things that hit home and do things that’s grand and not something that’s just one-off,” Los Angeles Lakers’ LeBron James said after Monday’s game. “I’m having conversations every day. I got half of my brain locked in on the playoffs and the other half locked in on how the hell I can help Black people become greater in America. And that’s what it’s all about.”

Anger, sadness and frustration that have been evident.

“Wide range of emotion with everything that’s going on in today’s world that we keep seeing over and over again,” Toronto’s Norman Powell said. “I’m pretty tired and sick to my stomach to have to sit up here and talk about this again, and continue this long fight we’ve been fighting since day one of slavery being brought over to America and having to fight for our rights and our freedoms to live a life that’s promised to everybody. We have to constantly fight and see our lives being valued as so little.”

“It’s painful. We’re doing all of this to bring about awareness. It’s not too much that has been done. Every day we fear going outside, friends and family. You never know. You might get a phone call that someone close to you might not make it the next day. That’s a scary sight to be having that feeling in this world right now.

“… It’s an ongoing fight. We have been advocates about this for the longest. It’s just people are not taking initiative and not taking the approach that they fully should.”

VanVleet wondered why Black athletes and entertainers are the ones always getting asked about solutions.

Brown, who wears No. 7, now sees something different when he looks at his Celtics jersey.

“Every time I look at my jersey now what I see is a Black man being shot seven times, and America sees his background report. It’s easier to see that than see the truth.”

US City Guards Against Protests over Police Shooting of Black Man

US City Guards Against Protests over Police Shooting of Black Man

Exposing the Cracked Lens on HBCUs