in Technology
Reading Time: 7min read
A A

An elite public high school in northern Virginia discriminated against Asian American families when it overhauled its admissions policies amid a push to increase Black and Hispanic representation at the school, lawyers argued Tuesday.

A lawsuit against the Fairbanks County Schools board claims high-achieving Asian teens are being disadvantaged by the new admissions system that prioritizes racial balance over merit.

Thomas Jefferson High School for Science and Technology – known for churning out top-tier students who go on to attend Ivy League schools – previously accepted students based on a ‘race-neutral standardized admissions test,’ the lawsuit said.

That policy was replaced with a ‘merit based lottery’ after officials began feeling pressure to diversity enrolment following the death of George Floyd at the hands of a Minneapolis cop.

During the 2021-22 school year – the first curricular year since the new policy took effect – Asian admission dropped from 73 percent to 53 percent, according to district data.

The percentage of black students rose from one percent during the 2020-21 school year to seven percent this year. Hispanic representation ratcheted from three to 11 percent and white enrolment jumped from 18 percent to 22 percent at the Alexandria school.

Fairbanks County Public Schools in 2020 changed its admissions policy for Thomas Jefferson High School for Science and Technology candidates in an effort to strike a racial balance. It resulted in a nearly 20 percent drop in Asian students 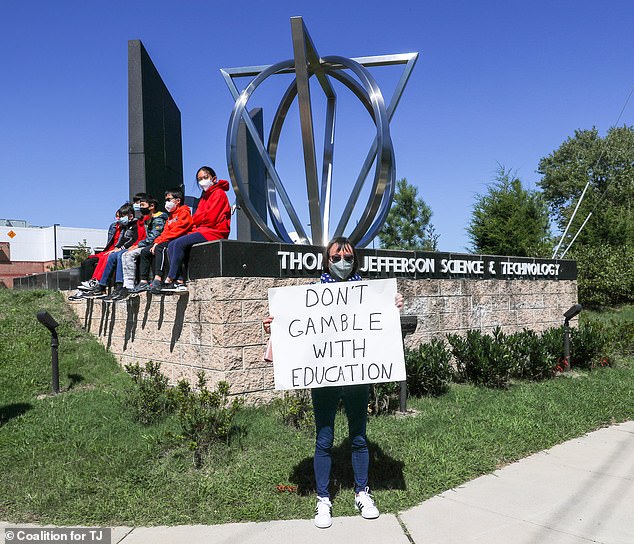 A coalition of parents is suing the school, claiming the new policy puts Asian students at an unfair disadvantage

The case has garnered significant attention in part because of the school’s prestigious status: it was ranked the best public high school in the nation by U.S. News and World Report.

But Black and Hispanic students have been woefully underrepresented in the student body for decades.

In June 2020, weeks after Floyd’s death, statistics were released that showed the number of black students attending Thomas Jefferson was ‘too small to report.’

School principal Ann Bonitatibus responded by saying diversity statistics did ‘not reflect the racial composition in FCPS,’ according to court documents.

‘Recent events in our nation with black citizens facing death and continued injustices remind us that we each have a responsibility to our community to speak up and take actions that counter racism and discrimination in our society.’

The new policy guarantees admission to the top students at each of the county’s middle schools. It also takes into account factors such as whether the child is eligible for free or reduced-price lunches because of his or her family’s income. 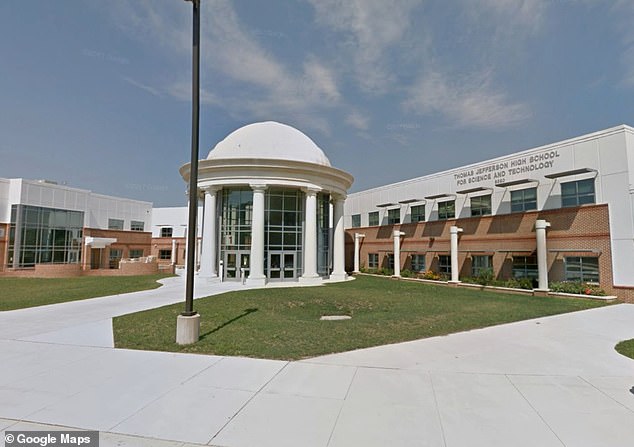 Thomas Jefferson High School for Science and Technology was ranked the best public high school in the nation by U.S. News and World Report 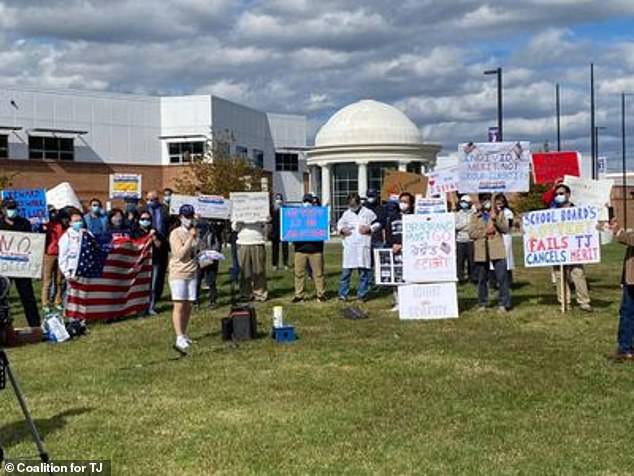 The school previously accepted students based on a ‘race-neutral standardized admissions test,’ the lawsuit said. It contended the new system hurts academically-qualified Asians who might not be admitted under the recently-implemented policy

Chris Kiesar – an attorney for the The Coalition for TJ, which filed the lawsuit – said the geographic quotas are merely a proxy for racial quotas, and that the school board’s intent all along was to increase Black and Hispanic representation at the expense of Asian American families.

He said the school board was successful in doing so.

‘Racial balancing was always at the forefront of what was going here,’ he said.

He cited comments made by school board members throughout the debate over changing the policy, which he said were always focused on racial composition.

In court papers, lawyers for the coalition also cited text exchanges between board members in which one member says ‘there has been an anti-Asian feel underlying some of this, hate to say.’ 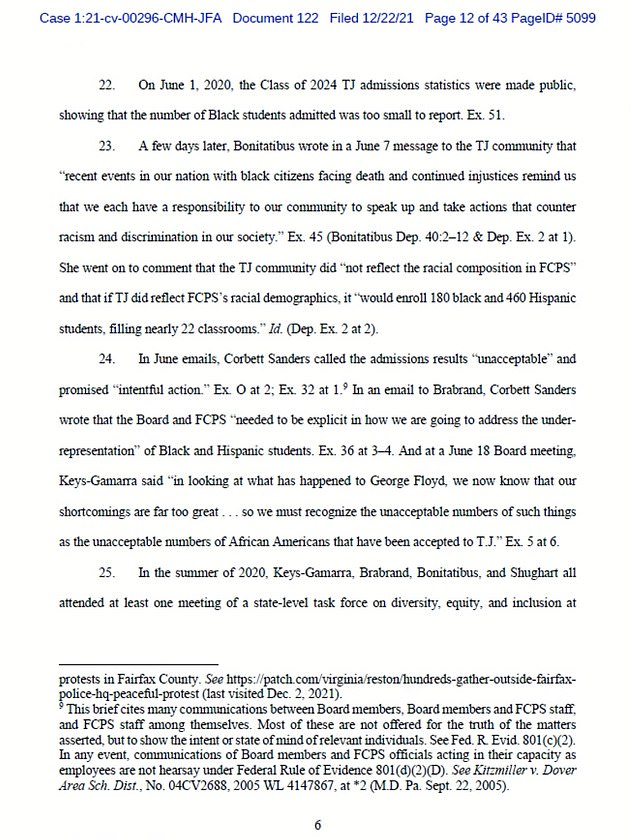 In June 2020, weeks after Floyd’s death, statistics were released that showed the number of black students attending Thomas Jefferson was ‘too small to report’. Trustees at the local school board were appalled by the revelation, according to court documents 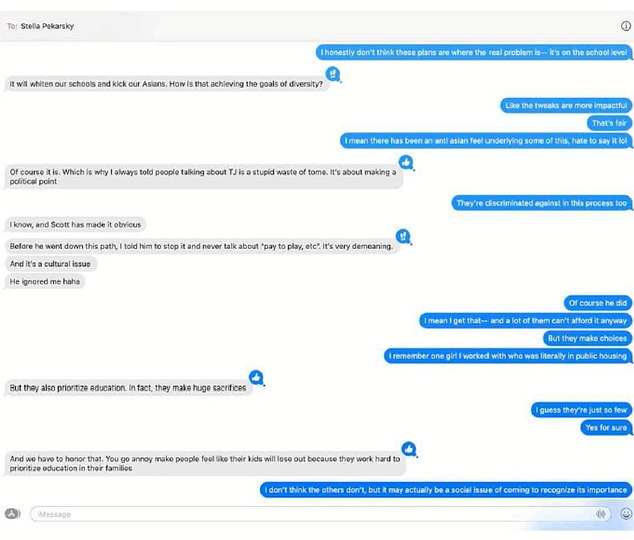 In court papers, lawyers for the coalition also cited text exchanges between board members in which one member says ‘there has been an anti-Asian feel underlying some of this, hate to say’

Sona Rewari, an attorney for the school board, said there is nothing discriminatory about the new policy and that it is merely designed ‘to give top students from every part of Fairfax County a meaningful opportunity to attend TJ.’

She also argued that if the plaintiffs’ legal arguments were adopted, any effort to level the playing field to address past wrongs would automatically be unconstitutional, because increases for Black and Hispanic students would necessarily come at the expense of Asian students who make up a clear majority of the student body.

The proper standard, she said, is to determine whether the board acted with a desire to harm Asian Americans, and she said no evidence of that exists.

The case in Alexandria is being heard while the U.S. Supreme Court is weighing whether to hear a similar case filed by Asian families against Harvard University over its admissions policies.

U.S. District Judge Claude Hilton gave no indication at Tuesday’s hearing of how he might rule, but he said he sees no reason to hold a trial on the matter.

It means his ruling will decide the case, though either side will be free to appeal.

Pulitzer Winners Include The New York Times and The Washington Post