Leaders emphasize need for action at MLK dinner in Schaumburg

“The dream of Dr. King is dead,” said the Rev. Clyde Brooks of Arlington Heights, chairman of the Illinois Commission on Diversity and Human Relations.

Brooks made the remark Saturday to a crowd of roughly 600 people at the commission’s 52nd Dr. Martin Luther King Jr. Remembrance Dinner and Concert in Schaumburg.

He stressed King’s dream to achieve justice and the freedom to vote still are struggles today and urged the crowd to wake up and act.

Brooks said King didn’t blame hate groups or anti-rights activists, but rather people “who say nice things, but when they see evil and hear evil they elect to say nothing and to remain silent. Because evil cannot exist unless good people allow it.”

Elected officials, including several Northwest suburban mayors along with business, community and faith leaders, were among the attendees.

“It’s important to remember that although African Americans were the overwhelming majority in the civil rights movement, we were blessed with the help and support of people of all description, particularly those of different faiths,” she said. “Tackling the challenges ahead of us, such as ensuring the safety of our communities, rebuilding our economy, moving beyond the pandemic, supporting the next generation requires us to stay unified.”

The highlight of the evening was a performance by the Five Blind Boys of Alabama. The five-time Grammy Award-winning artists have been inducted into the Gospel Music Hall of Fame and has performed at the World’s Fair, the New Orleans Jazz & Heritage Festival, the White House and throughout the United States and Europe.

The Chicago chapter of the Council on American-Islamic Relations, or CAIR-Chicago, will host a panel discussion on the state of Muslims in the Chicago area and suburbs during its 18th annual banquet on Saturday, Nov. 20.

U.S. Rep. Andre Carson, a Democrat from Indiana, speaks with members of the Sikh Coalition at the Sikh Satsang of Indianapolis last April. Carson is scheduled to take part in a panel discussion Saturday on the state of Muslims in the Chicago area.
– Associated Press

Guest speakers are U.S. Rep. André Carson of Indiana’s 7th District, one of only four Muslim Americans ever elected to Congress, and Dalia Mogahed, director of research for the Institute for Social Policy and Understanding. I will be moderating the discussion.

Carson, a Democrat, was elected to represent his hometown of Indianapolis in 2008. He is the longest-serving Muslim American in Congress — two others are Democratic Reps. Ilhan Omar of Minnesota and Rashida Tlaib of Michigan. 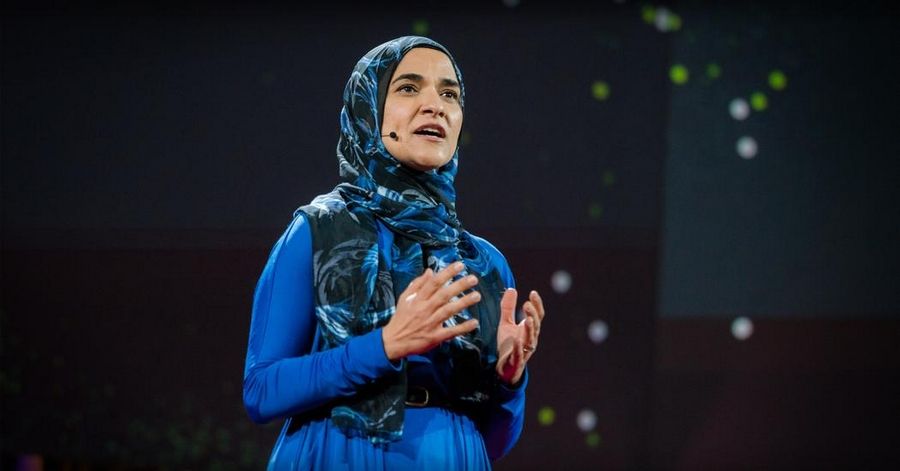 Dalia Mogahed, pictured here giving a 2016 TED talk titled “What it’s like to be Muslim in America,” will speak about the state of Muslims during CAIR-Chicago’s virtual banquet Saturday.
–

“Muslims have always been part of the American fabric, starting with African Americans,” CAIR-Chicago Executive Director Ahmed Rehab said. “Since we started our work at CAIR-Chicago 18 years ago in a post 9/11 world, we have seen plenty of growth with notable representation in public office, media, entertainment, arts, sports, health care and education. Today, Muslim voices are represented in every sphere of public life, and though Islamophobia remains a challenge, this palpable representation has helped demythologize Islam and Muslims.”

The League of Women Voters of Arlington Heights and surrounding areas will host a virtual discussion on critical race theory in December.

Audra Wilson, president and CEO of the Shriver Center on Poverty Law in Chicago, will be the featured speaker. Wilson formerly served as executive director of the League of Women Voters of Illinois, which has nearly 4,000 members and more than 40 chapters statewide.

Wilson advanced the league’s advocacy on issues of race equity and voting rights. In October 2019, she was appointed chair of the Cook County Commission on Women’s Issues by Cook County Board President Toni Preckwinkle.

“She is going to be unpacking all of this angst over critical race theory,” said Heidi Graham, president of the League of Women Voters of Arlington Heights. “There is just so much that we do not get taught.”

Awarded every two years by the Aspen Institute College Excellence Program, the prize honors colleges with outstanding achievement in five critical areas: teaching and learning, certificate and degree completion, transfer and bachelor’s attainment, workforce success, and equity for students of color and students from low-income backgrounds.

Harper and ECC are among 10 eligible institutions in Illinois and the only two Chicago-area colleges to make the list of nominees for the honor.

“Being selected as one of the 150 top institutions eligible for the Aspen Prize demonstrates Harper College’s commitment to closing equity gaps, advancing social and economic mobility and sustaining a student-centered culture that prepares students for success in their endeavors,” Harper President Avis Proctor said. “We are honored to be in the running for this very prestigious recognition with many of the nation’s best community colleges.”

Harper also was eligible for the 2017 Aspen Prize.

Aspen will narrow the field of 150 to 10 finalists by next summer and award the prize winner in spring of 2023.

BestColleges.com has launched a new resource with information, tips and advice for current and prospective students aspiring to attend Historically Black Colleges and Universities.

HBCUs were established to educate Black students in the United States but are accessible to all students. They offer education and mentorship opportunities with a goal to uplift Black communities.

There are more than 100 HBCUs nationwide making up 3% of accredited colleges and universities in the U.S. They enroll roughly 300,000 students each year, of which 76% are Black.

• Share stories, news and happenings from the suburban mosaic at mkrishnamurthy@dailyherald.com.

Laurel Manor Recreation Center and sports pool to shut down