Manfred misses the mark with Braves — The Undefeated

HOUSTON — “It’s important to understand that we have 30 markets around the country. They aren’t all the same. The Braves have done a phenomenal job with the Native American community.”

Those were the words of Major League Baseball commissioner Rob Manfred Tuesday before Game 1 of the World Series between the Atlanta Braves and Houston Astros. He followed up that whopper with another staggeringly misinformed deduction, a summary dismissal of the matter.

As a native of the nation’s capital, this is a refrain I’ve heard plenty of times before. In that case, yet another team from Boston that was moved held onto a moniker that eventually was understood to be unseemly — and the team removed it after decades.

But the case of Atlanta’s baseball team is one of a little more nuance.

Without getting too far into a battle of right or wrong, and, quite frankly, in 2021, people of color are tired of having to explain how things like representation correlate to violence and harm in communities. Basically, when people are caricatured routinely, it’s a form of violence that manifests itself in other ways that go far beyond dignity.

Short version: Everyone heard about Gabby Petito, the young white woman who went missing in a national park in Wyoming last month. You probably don’t know that more than 700 Indigenous people went missing in that very state over the last 10 years. A report from the Missing and Murdered Indigenous Persons Task Force in Wyoming (think about the fact that that’s even a thing) says that 85% were kids, and 57% were female.

There’s a direct correlation between racist imagery and real-life violence.

We need not go on an admonishing rant about the team’s move to Cobb County as an indication of who they really cared about from a fan base standpoint. You can ask any Black person from Georgia their thoughts on that and you’ll know immediately that they felt abandoned. But let’s just follow the basic logic and evolution of sports in our times, as in the last say, five years, and it’s pretty easy to see that the team is due for some wholesale changes that aren’t particularly drastic in 2021.

NASCAR pulled down Confederate flags last year. The Washington Football Team, for all its other outlandish problems, at least managed to remove a racist moniker from its branding. These were examples of overtly antagonizing marginalized people. MLB self-corrected when it came to the Cleveland Indians, and we again got a little closer to what’s right.

The team was asked to stop using the racist caricature of Chief Wahoo, a decision they allowed the team to take a couple seasons to implement for whatever reason, and the city reacted well. It brought up the larger conversation of whether we should be using Native American humanity as mascots (as separately from appropriate imagery, see: the Seattle Seahawks) at all. Most reasonable people said probably not, and next year, it’ll be the Cleveland Guardians.

You kind of thought to yourself, OK! We’re getting somewhere. The memes of “it’s actually not racist” with people dressed up in redface were understood for what they really meant, and it seemed like our collective conscience understood, beyond anything: Yeah, we just don’t do this anymore.

Presumably, we’re a long way from 1991, in which The New York Times wrote this headline: Indians Stage Protest Outside the Dome. In that story, then-commissioner Fay Vincent is at least honest about the effort that he’s not willing to make. The event occurred outside of the Hubert H. Humphrey Metrodome in Minneapolis, where the Twins were playing … the Braves for the World Series.

“It is inappropriate to deal with it now,” Vincent tellingly said. “Telling 57,000 people to change is beyond my capacity.”

Which leads us to the Braves. They exist right on the line of inappropriate that most reasonable people would qualify as “casual.” It doesn’t take a genius to see that dimming your lights and playing some version of a menacing war chant is just lame, never mind out of pocket in these times. Chopping your arm, a pantomime of what I presume is a fighting posture, is just so nakedly off-base that you have to be willfully ignoring everything to think that’s cool.

The logic to justify it works backward and also tells on itself. Take, for example, Barrett Sallee. He writes about college football for CBS Sports and lives in Smyrna, Georgia, according to his Twitter account. Before the series, he tweeted this.

“PSA: If you’re going to write columns on the chop and related topics associated with Atlanta Braves, do research on the organization’s relationship with Native Americans and, specifically, the Eastern Band of Cherokee Indians. Don’t just rattle off takes,” he wrote, linking to a team-sponsored page highlighting the work it’s done with a Native American tribe, starting … this year.

If the topic wasn’t so serious, this would be one of the more laughable self-owns I’ve ever seen. The “I have a few [insert minority here] friends” has long been understood as ridiculous in terms of anything that makes sense. Plainly, we’re all smarter than that now. The National Congress of American Indians agrees.

But the process of shooting the very video that the Braves are using as social collateral wasn’t exactly smooth sailing. The short, which features the Eastern Band of Cherokee Indians (EBCI), which the team page oddly claims is “the largest federally recognized tribe in our region,” almost immediately was ineffective in terms of actual education.

“It was right around the time the WFT announced their change and I selfishly wanted to be involved and see if I could help make sure we didn’t get embarrassed. I went back home for the filming, signed the consent, chatted with their crew and felt pretty good about it,” Natalie Welch said Wednesday. From Cherokee, North Carolina, she’s a member of the EBCI and assistant professor of sport management at Linfield University in Oregon. “When the video came out, I immediately felt gutted. There were so many fans who just responded ‘chop on!’ or it completely fell on deaf ears. It was like a free pass for them to continue to appropriate and perpetuate racism. I watched as our chief continued to tout the relationship and the team did a T-shirt fundraiser for our language immersion school. It’s hard to argue against those benefits, but to me it’s not worth it for my tribe to benefit while other tribes don’t and it keeps the continued oppression cycle going for other tribes, communities and Indigenous individuals.”

What makes it particularly quizzical is that not unlike Cleveland, which had the Spiders, Atlanta has an option right there that even allows it to keep its apparently oh-so-precious branding, too. Just name it after Henry Louis Aaron, the greatest player in franchise history and arguably the greatest player in MLB history. The Atlanta Hammers. 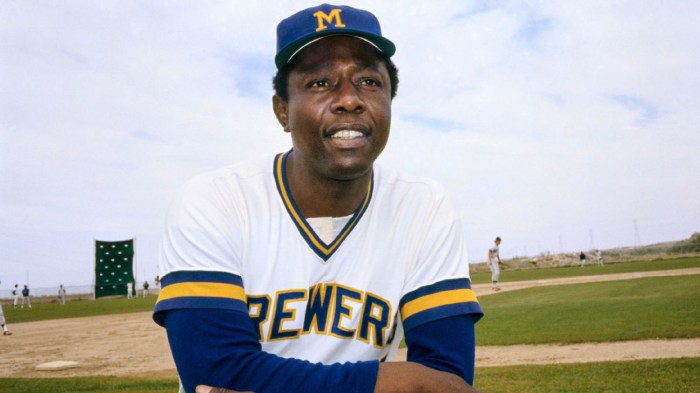 Hank Aaron and his eternal connection to Black baseballRead now

It’s a no-brainer, and a better name overall. But, well, privilege and recalcitrance make people in power say things like, you’ve “done a phenomenal job with the Native American community,” as if that’s even a thing. The whole reason we’re in this place to begin with is because absolutely no one has done a good job of anything with the plethora of different Native nations and communities FOR CENTURIES.

“ ‘American community’ paints a broad brush and lumps us all into one category, much like what mascots do. There are 574 independent sovereign nations who have treaties with the U.S. and each tribe has its own unique culture, governance and situation,” Welch, 34, explained. “Lumping us all together in this way continues the erasure and marginalization of our unique tribes and nations, not to mention individuals with various lifestyles. There’s tribes who are very profitable and self-sustaining while there are others that are like Third World countries right here in the U.S.”

The chop has to go, the chant is deplorable and all of it is racist, even if the name isn’t a slur. All of these things can be true. But when you put the burden of proof for progress on baseball, the oldest, whitest sport in America, this is what you get.

“It’s funny there’s always the folks who are like ‘this is our heritage!’ and it’s what, maybe a 100-year-old tradition? What about the heritage and history of my tribe or other Indigenous peoples in this country? I see it as an extension of white supremacy,” Welch pointed out. “The belief that we own this and it’s ours and it’s our sacred safe space that shouldn’t be messed with. I also want to stress that I’m a sports fan, even an Atlanta fan. I’d much rather be celebrating the positives that are going on in our community, we have a really great sense of humor. This is deeply personal with impacts that I can’t even fully explain.”

If MLB is that interested in honoring history in its local communities, it could really lean in. The Cobb County Crackers has a pretty accurate ring to it.

Clinton Yates is a tastemaker at The Undefeated. He likes rap, rock, reggae, R&B, and remixes — in that order.

A Recap of the EBONY ‘Power Talks’ Series • EBONY

A Recap of the EBONY 'Power Talks' Series • EBONY