Michael Blackson jubilates after becoming a US citizen

in Entertainment
Reading Time: 2min read
A A

America is the greatest country in the world, Blackson

Ghana’s Michael Blackson is officially a United States of America citizen after 30 years of failed attempts.

Michael on November 24 shared an image of himself proudly waving the US flag to announce that he’s completed his neutralization ceremony in Los Angeles.

The actor who couldn’t hide his joy stated that he can now smile after being granted US citizenship.

He displayed his green card to his over 5.3 million followers adding that “America is the greatest country in the world and that’s why everybody comes here for an opportunity.”

His post read: “They finally made me an American citizen. Only foreigners will understand why I’m smiling and what we go through to get a green card or citizenship.”

Michael, however, did not detail why it took him over 30 years to gain US citizenship but he noted that “this country has been nothing but a blessing.”

He adds that he will apply for welfare immediately after he is sworn in.

“I’m showing ya this because I have to turn this in back to the U.S immigration today at 10 in Los Angeles. For those who have no idea what this is it’s a green card and now you know a green card is not green lol. I’ve made a living making fun of America and Americans but all jokes aside America is by far the greatest country in the world and that’s why everyone comes here for an opportunity.

“Today I’m turning in my green card to replace it with an American citizenship certificate. I’m not going to get into details of why it took over 30 yrs to finally become a citizen but one reason was I just loved being an African and wanted to stay authentic.

“This country has been nothing but a blessing to me especially my Black Americans who embraced me from the first time they saw me on Comic view and the movie next Friday, can’t forget my Latin Americans who also showed me love then followed by Asian Americans, Indian America then about 5 yrs ago White Americans came on board. I say that because that’s what makes American great is a whole bunch of people from different parts of the world came to settle in one place and that’s why this is the best country in the world. Can’t wait to swear in so I can apply for welfare,” he wrote. 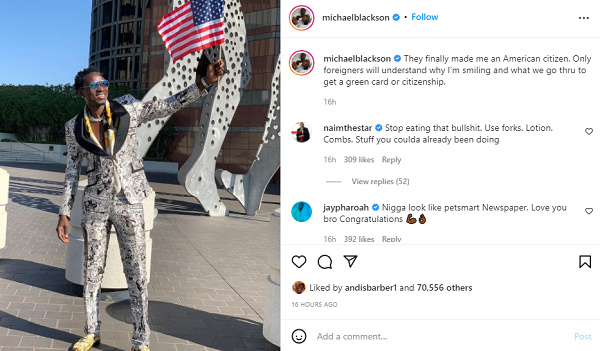 This Thanksgiving, Remember the Curse of Ham