in Entertainment
Reading Time: 12min read
A A

Historical books about the Coachella Valley typically depict the region as a playground for Hollywood stars and United States presidents. But such portrayals fail to capture the full story of the Southern California desert, journalist and author Jeff Crider says.

“The roots of this valley are much more complex,” Crider says. He previously worked for local news outlets including The Desert Sun, The Imperial Valley Press and The Riverside Press-Enterprise for a dozen years, and has also penned six history books about California water agencies.

Crider recently published a 110-page history of the City of Coachella and the eastern Coachella Valley. The book draws on old newspaper reports, in-depth interviews and archival documents to trace the history of the region from its beginnings as Cahuilla Indian land to its emergence as an agricultural powerhouse. It also highlights the immigrants who have helped the region grow and the challenges those families have endured.

And it is full of fun facts like this one: Coachella was supposed to be named Conchilla, meaning little shell in Spanish, in recognition of the many shells that were scattered about the area by ancient Lake Cahuilla. But, Crider writes, the print shop that filed the prospectus papers to change the town’s name from Woodspur to Conchilla misread the name and filed it as Coachella, which has no meaning in any language.

More: History: How civil rights and diversity became a pivotal part of the city of Coachella’s past

The City of Coachella commissioned the book following its 70th anniversary and to celebrate the construction of its new downtown library, which opened in 2018. It is available in English and Spanish, and is intended for students, the community at large and future generations, Crider said.

“We wanted to make sure that people understood what the City of Coachella is,” said Coachella Mayor Steven Hernandez, noting that many people outside the region know the city’s name from the massive music festival that takes place in neighboring Indio.

Today, Coachella has about 45,000 people, making it the fifth-most populous city in the Coachella Valley. The city is 98% Latino, and has the lowest median household income ($33,870) and the youngest median age (33.5) of the region’s nine cities. 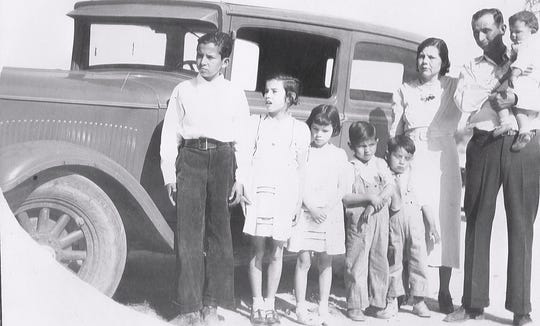 1937 photo of part of the Arias family. From left to right, Ruben, Celia, Alice, Hector, Robert and their parents, Mercedes and Gabriel Arias, with their baby, Raul. (Photo: Arias Family)

Sarah Seekatz, an associate professor of history at San Joaquin Delta College who has written extensively about the east valley, applauded city leaders for investing in a book that frames the region as more than a hangout for the Rat Pack. Rather, she said, Crider’s book tells the stories of families who immigrated to the region — like her own.

“It’s about Coachella, but it’s also about how different the eastern Coachella Valley was from Palm Springs,” she said. “I love that it not only gives the due to the agriculture that made the area, but to the people who made the agriculture work, and the reality was that many of those people were immigrants.”

Here are five major takeaways from Crider’s book, “Coachella: A history of Coachella and its people.”

Discovery of water propels growth of the city

The ancestors of today’s local Native American tribes — the Agua Caliente, Augustine, Cabazon and Torres Martinez — had their own farms in the region, lived off their land and traded with other Southern California tribes for hundreds of years, Crider writes. The tribes, already devastated by a smallpox epidemic in the early 1860s, were further weakened as the U.S. government began imposing a reservation system on native people in the 1870s.

The first recorded non-Native American to make a permanent home in Coachella was named Jason Rector. Rector and his brother drilled a well near the corner of Grapefruit Avenue and Fifth Street in 1900. They discovered a significant groundwater supply.

Within two years, there were more than 100 artesian wells in the eastern Coachella Valley and a growing number of settlers were converting the region into productive farmland. The benefit of growing crops in the desert region, Crider writes, was that farmers could harvest fruits and vegetables earlier than any other area of the country.

“They had their own unique market niche,” he told The Desert Sun. 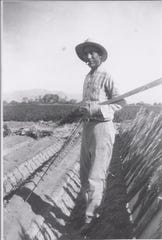 Palemon Arias working on the family farm in Thermal in the 1930s. (Photo: Arias/Torres families.)

As farming operations expanded across the region, Coachella-area growers recruited local Cahuilla Indians to work on their land. The use of the eastern Coachella Valley for commercial agriculture beginning in the early 1900s marked “the final dismantling of the tribal economy that had nurtured and sustained the Desert Cahuilla people for thousands of years,” Crider writes.

Coachella didn’t become an incorporated city until December 1946, nearly 50 years after the Rector brothers first drilled the well, Crider writes. The city was initially a 2.5 square-mile area. Coachella’s original City Hall was built on its current site and included a courthouse, the U.S. Postal Service office and the police department.

The growth of dates shapes the region

In the 1800s and into the early 1900s, dates were an exotic fruit that could only be imported from North Africa and the Middle East, Crider writes. But by the 1890s, researchers with the U.S. Department of Agriculture began exploring the feasibility of transplanting date palms in arid areas of the desert southwest, including the Coachella and Imperial valleys.

The USDA, in collaboration with the University of California, in 1904 established an experimental date garden near Mecca. The research station was later relocated to a site near Indio.

The town of Mecca, for example, was originally named Walters in honor of an early Coachella Valley settler, but it was changed to Mecca — a nod to Islam’s holiest city, in Saudi Arabia — for marketing purposes in 1904. 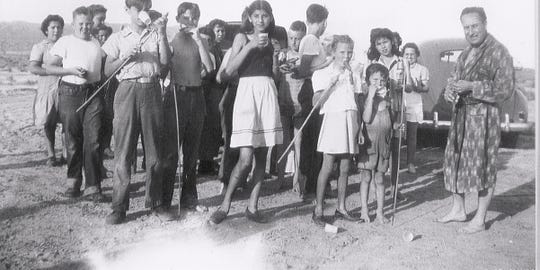 Seekatz, who wrote a historical book about the valley’s date industry, said tourists visiting Palm Springs would venture out to the east valley to see the date palms that had been transplanted from the Middle East.

“I think a lot of people don’t realize that the eastern Coachella Valley … was doing agricultural tourism before it was cool, and it centered around this fantasy of ‘we’re America’s Arabia,'” she said.

Immigrants seek opportunity in the desert

Mexican immigrants began seeking work in Coachella Valley fields during the Mexican Revolution between 1910 and 1920. More came to Coachella during the Cristero Rebellion of 1926 to 1929, amid an uprising against the anti-Catholic policies of Mexican President Plutarco Elias Calles.

Among them were eight of the valley’s pioneering families of Mexican descent, who Crider profiles in the book.

Immigrants from other countries have sought opportunities in the region, too. 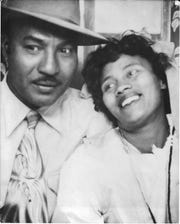 Japanese immigrant families came to the valley in the early 1900s to work, mostly as farm laborers, Crider writes. He also profiles an immigrant from Turkey, who eventually settled in the Coachella Valley and founded a date garden, and an immigrant from Portugal, who ran a Coachella hardware store for nearly 30 years.

Black families from Texas, Oklahoma and Louisiana also migrated to the Coachella Valley, he says. Some found economic opportunities in the valley’s cotton farms, he writes.

“We wanted to introduce the brown families, the black families, the Asian families, and their experiences within the city of Coachella and the surrounding area,” Hernandez said.

But immigrants to the Coachella Valley experienced racism, Crider writes.

Japanese immigrants were initially viewed as a cheap source of field labor, he writes.

“As entrepreneurial Japanese immigrants climbed the ladder from laborers to sharecroppers to tenant farmers and farm owners, they came to be seen as a threat, not only by white farm owners, but by politicians and the news media, prompting lawmakers to pass the 1913 California Alien Land Law, which was intended to prohibit land ownership by Japanese immigrants as well as their leasing of land for more than three years,” he writes.

One day after the Japanese bombed Pearl Harbor in 1941, 64 Japanese residents of Coachella gathered at Coachella Presbyterian Church and publicly pledged their allegiance to the United States and the U.S. Constitution, Crider writes.

Despite their pledge, the Riverside County Board of Supervisors passed a resolution “requesting the military authorities to exclude all enemy aliens from Riverside County and also remove all Japanese, irrespective of citizenship, from the confines of the county,” Crider writes, quoting a 1942 article from the Coachella Valley Submarine newspaper.

In doing so, the supervisors followed the lead of President Franklin D. Roosevelt, who authorized a 1942 executive order declaring that people of Japanese ancestry had to leave military exclusion zones in California and parts of other western states.

Japanese families from Coachella were eventually taken to an internment camp in Poston, Ariz. 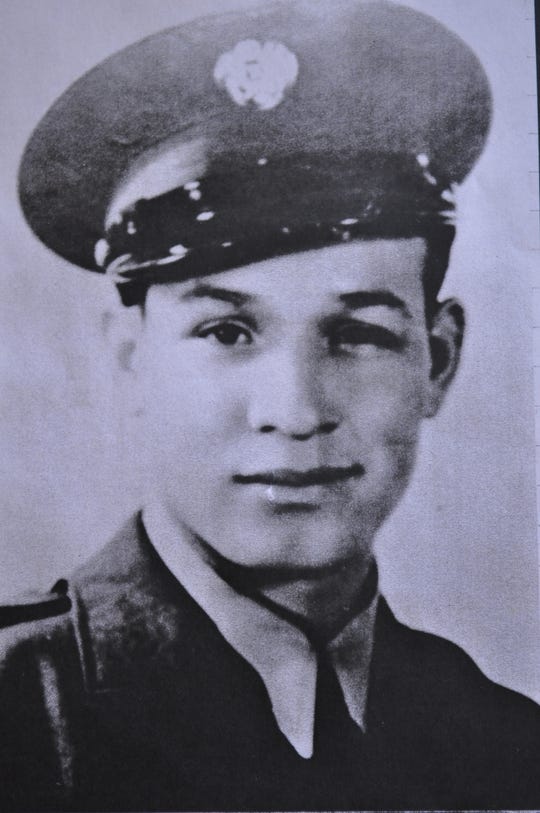 Some Black families, meanwhile, faced deed restrictions that prevented them from purchasing land and homes in many areas of the valley.

“In fact, many African Americans who arrived in the valley in the 1940s initially lived on Indian reservations because they couldn’t immediately find other places to live,” Crider writes, citing Steve Castleberry, whose father arrived in the Coachella Valley in 1946. Another source, Louise Rodarte Neely, told Crider her family found temporary housing at a farm labor camp in Indio.

And the children of Mexican immigrants faced segregation at school, he writes. They were directed to report to certain classrooms or to attend certain schools based on the color of their skin, he says, citing oral histories. In Indio, he writes, some siblings were sent to different schools based on how dark their skin was.

California Gov. Earl Warren signed a bill in 1947 that outlawed segregation of students based on race, creed or color.

“The strike, which lasted 10 days, ultimately encompassed nearly 1,000 farmworkers, according to an Associated Press report from May 12, 1965, which noted that farmworkers returned to Coachella Valley table grape fields after winning a 15-cent-per-hour increase, which boosted their pay to $1.40 per hour,” he writes.

“A lot of people don’t realize that it was the Filipino community that actually walked out of the fields and stuck first,” Hernandez said.

Toribio Arias, a produce hauler, with his brother, Gabriel, in the 1930s. (Photo: Arias/Torres families.)

The Agricultural Workers Organizing Committee merged with the National Farm Workers Association, which Chavez co-founded with Dolores Huerta, to form the United Farm Workers union in 1966, he writes. Coachella was the site of numerous farmworker protests, including an eight-day march from Coachella to Mexicali in May 1969.

The UFW has had a lasting legacy in the city. Coachella, Crider notes, was the first city to have an elementary school named in honor of Chavez.

Rebecca Plevin is a reporter for The Desert Sun. Reach her at rebecca.plevin@desertsun.com. Follow her on Twitter at @rebeccaplevin.

How your smartwatch could help