Planet Word Opens This Week. Here’s a Look Inside the High-Tech Language Museum.

Planet Word, a language museum housed in the restored Franklin School, opens this Thursday, October 22. Admission to the interactive exhibit space is free.

The sound-and-touch activated exhibits aim to be both educational and entertaining, often with a social justice bent. Founder Ann Friedman is a former Montgomery County public school reading and writing teacher, and the museum’s interactivity is an extension of her classroom style, making use of costumes and competitions to immerse students in language.

“This is a descriptive language museum, not prescriptive,” says Friedman. “That means we describe how people use words in language and celebrate that diversity. We don’t say, ‘No, that’s wrong, you should talk like this.’ ”

Take one of the museum’s opening exhibits: A narrator’s booming voice starts with a lesson on etymology, describing the often-violent origins of linguistic conquest. As the dialogue explores the source of words like “jorts” and “burrito,” 1,000 words carved out of a 20-foot wall begin to light up, inviting visitors to answer prompts into AI-driven microphones.

The message is immediate: This isn’t just a museum about words—it is powered by them, as well. 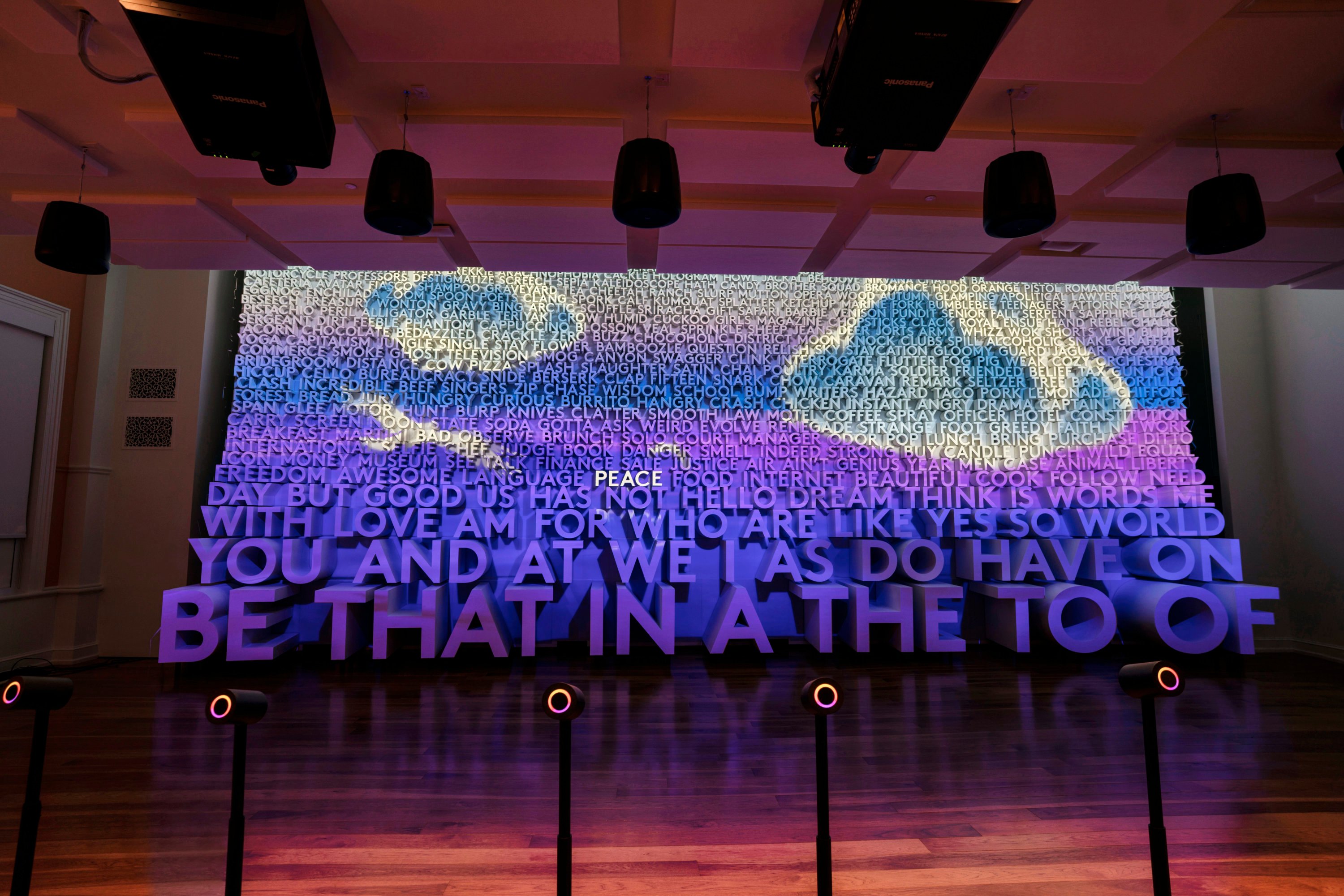 From there, visitors move to an expansive room featuring a globe glowing with 5,000 LED lights. Tap or speak to one of the 15 surrounding screens to enable messages about 30 different languages, including two types of sign language and five indigenous dialects such as the Piscataway language native to Maryland and DC. 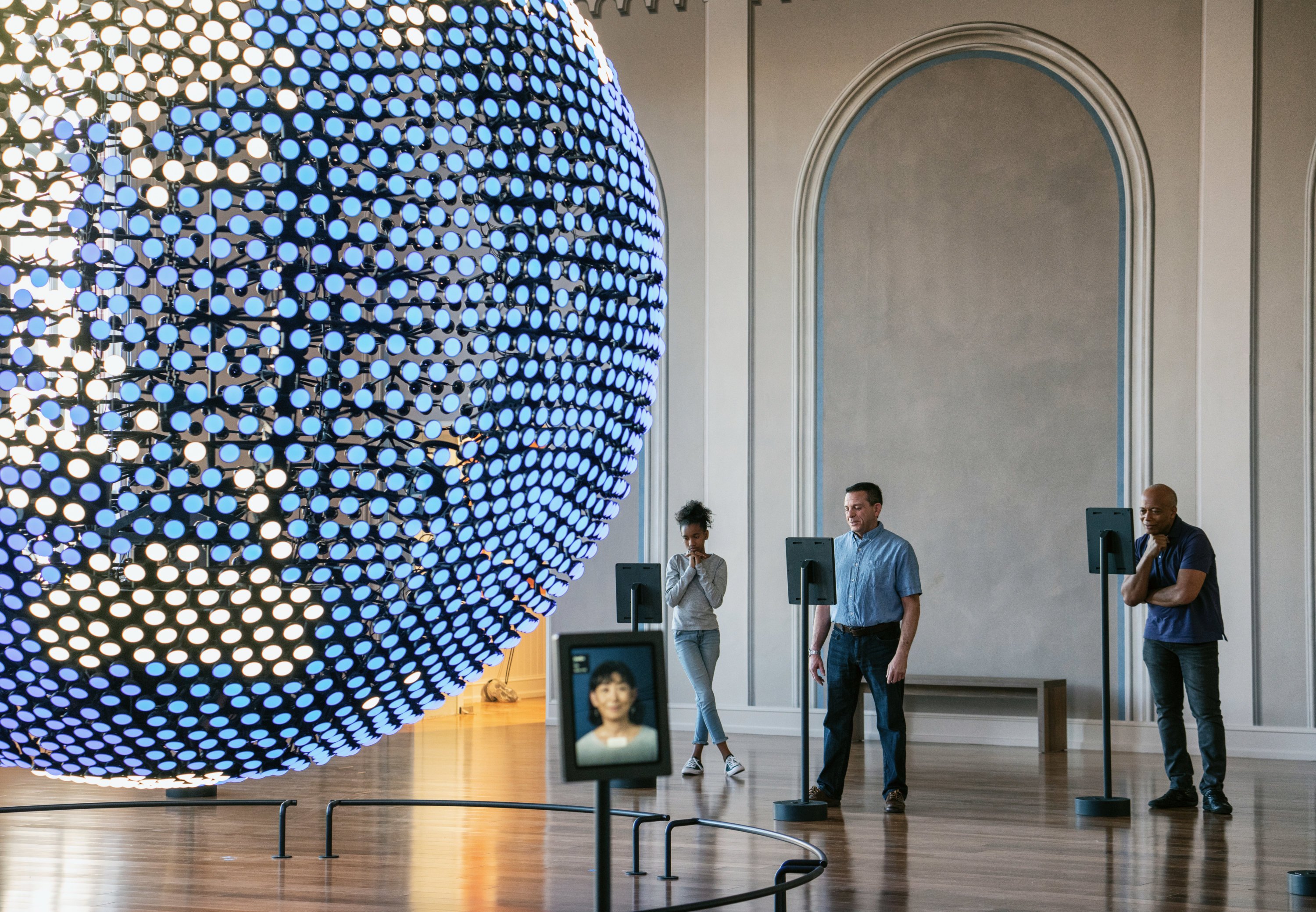 Exhibits frequently push visitors to learn through action, exploring language in the context of music, humor, speeches, and persuasion.

“We may not have a collection of objects at Planet Word, but everyone is bringing their own collection of the words they use to the museum,” says Friedman.

A display dedicated to speeches uses a range of pop-culture examples to teach about speechwriting. An adjoining recording room is a space to then put prose into practice using a roster of famous addresses, from Malala to Mufasa. Head to the karaoke lounge to learn how Andre 3000 uses forced rhymes in songwriting—and then belt “Hey Ya” under the sparkling disco ball. 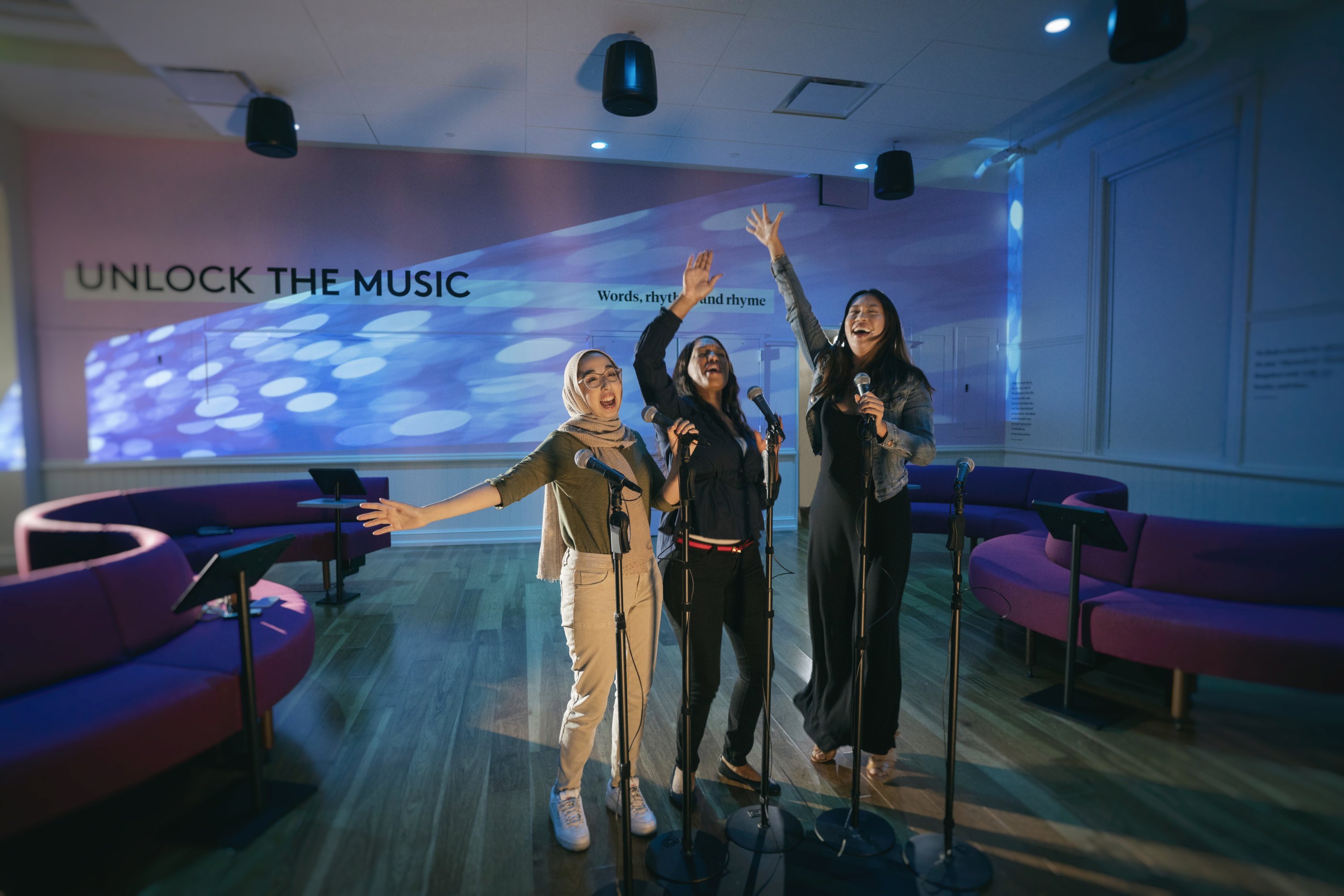 Jokes get a sunny yellow room of their own, where visitors can participate in wordplay-based competitions with friends. Choose from a variety of oversized cutouts for a game of “guess the pun,” which also doubles as an Instagrammable photo-op. 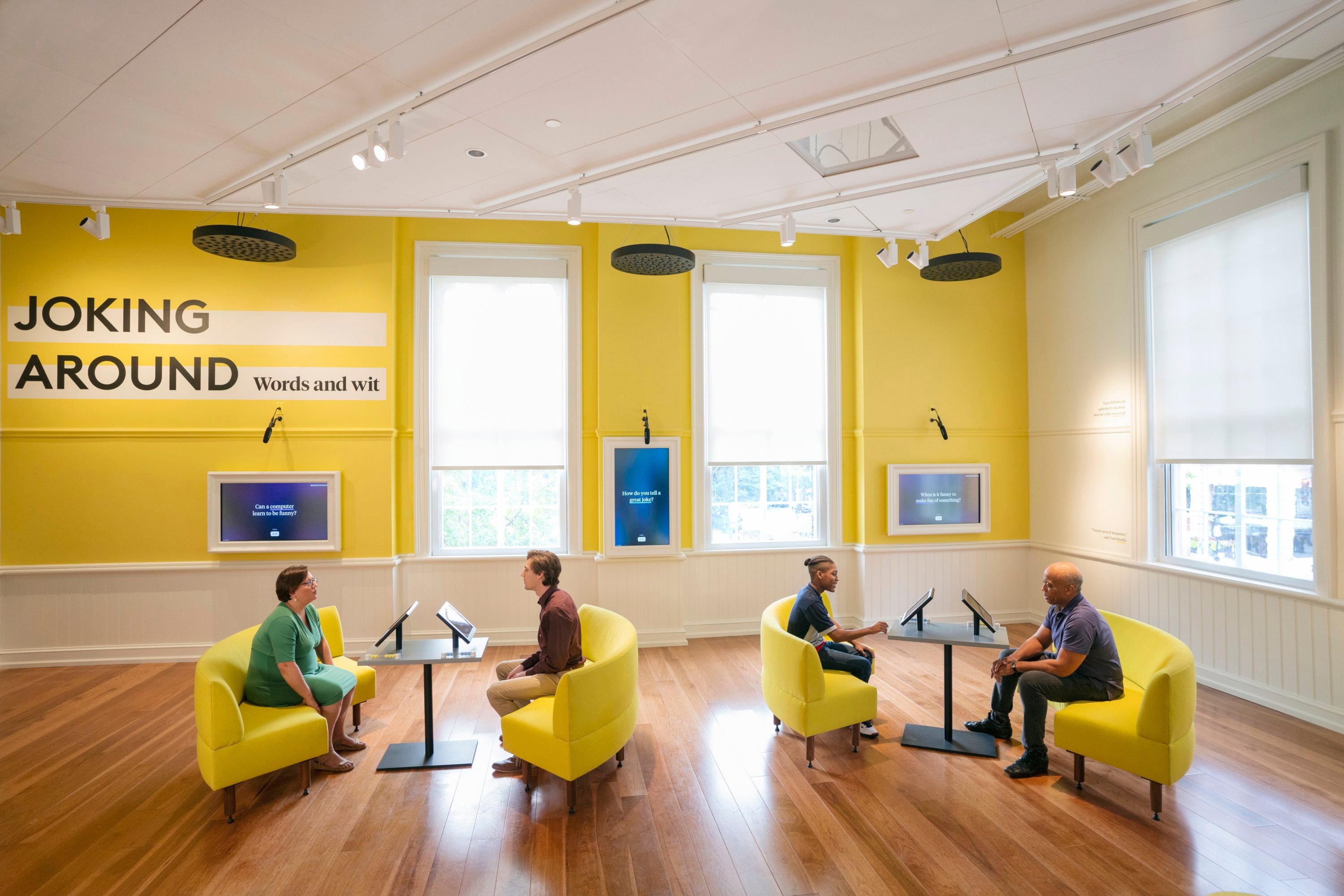 The less-funny implications of language are also explored, looking at words as a tool of influence. An ominous loop of screens uses brands and advertisements to show how words can be adapted to persuade. At the center of the swirl, visitors can create their own ad using the lessons learned along the way. 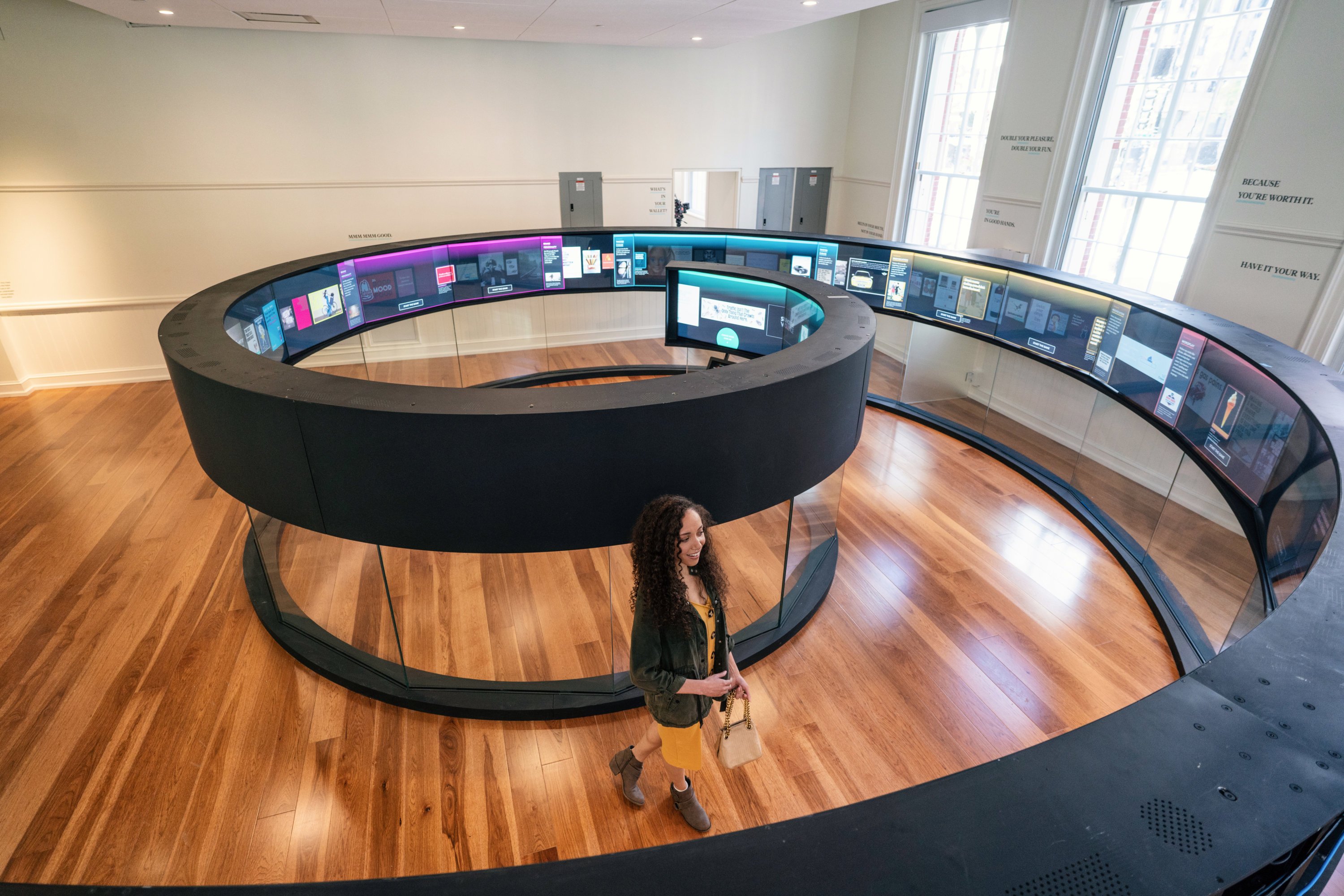 Friedman’s favorite feature of the museum is the sweeping library, a grand hall that at first appears to be a space for quiet academic pursuits. However, there are no shushing librarians to be found here—instead, it is a collaboration between artists, illustrators, and sound designers to bring almost 50 books to life. 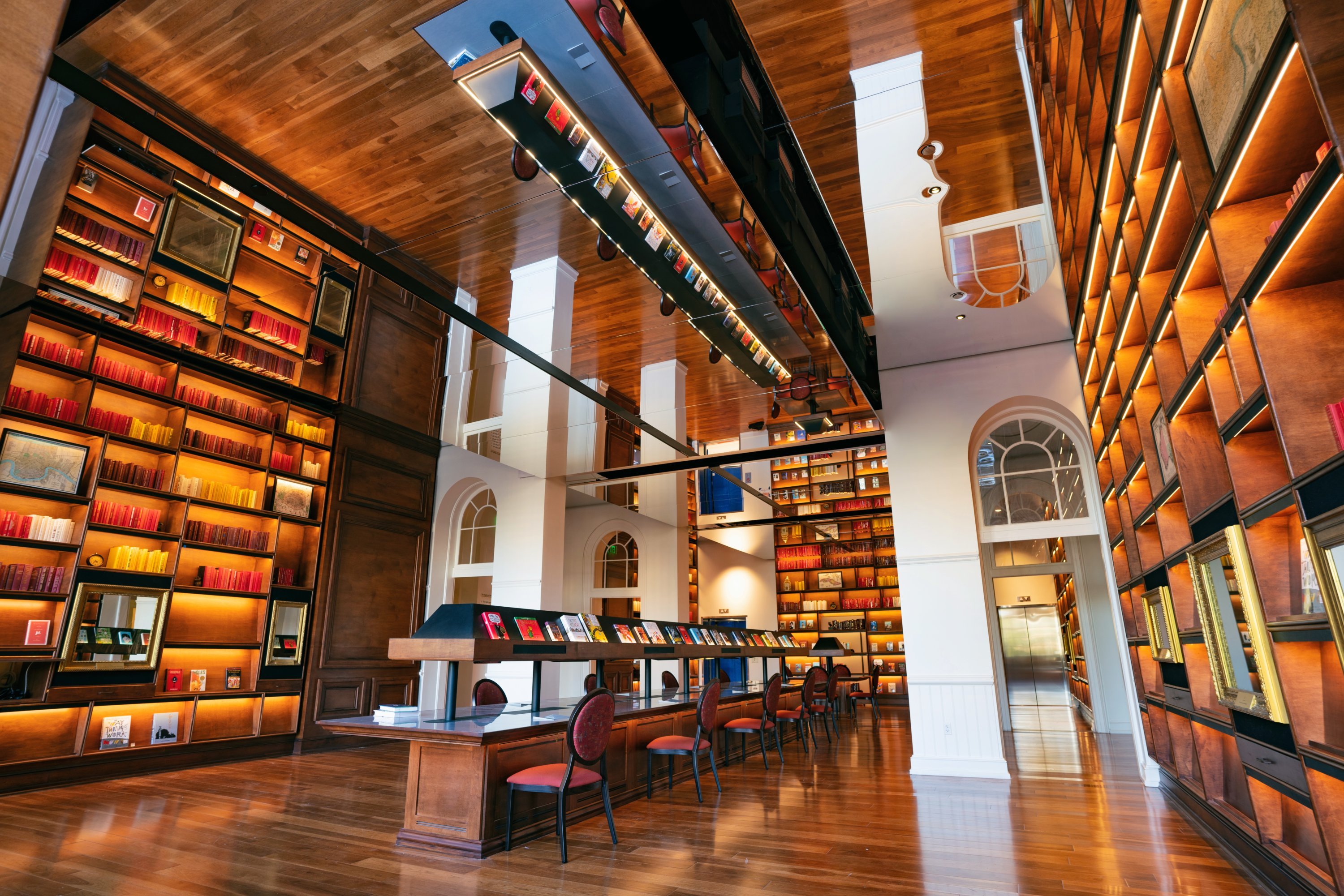 Open a book on a specific spot in the table, and the text leaps from the page into a projected light show specific to each tome. Accompanying narration entices readers with a quick summary of the Lorax; A Wrinkle In Time; Salt, Fat, Acid, Heat; and more.

Introverts can escape into the poetry nook, where a bookshelf opens into a cozy room echoing with recordings of poetry recitations. 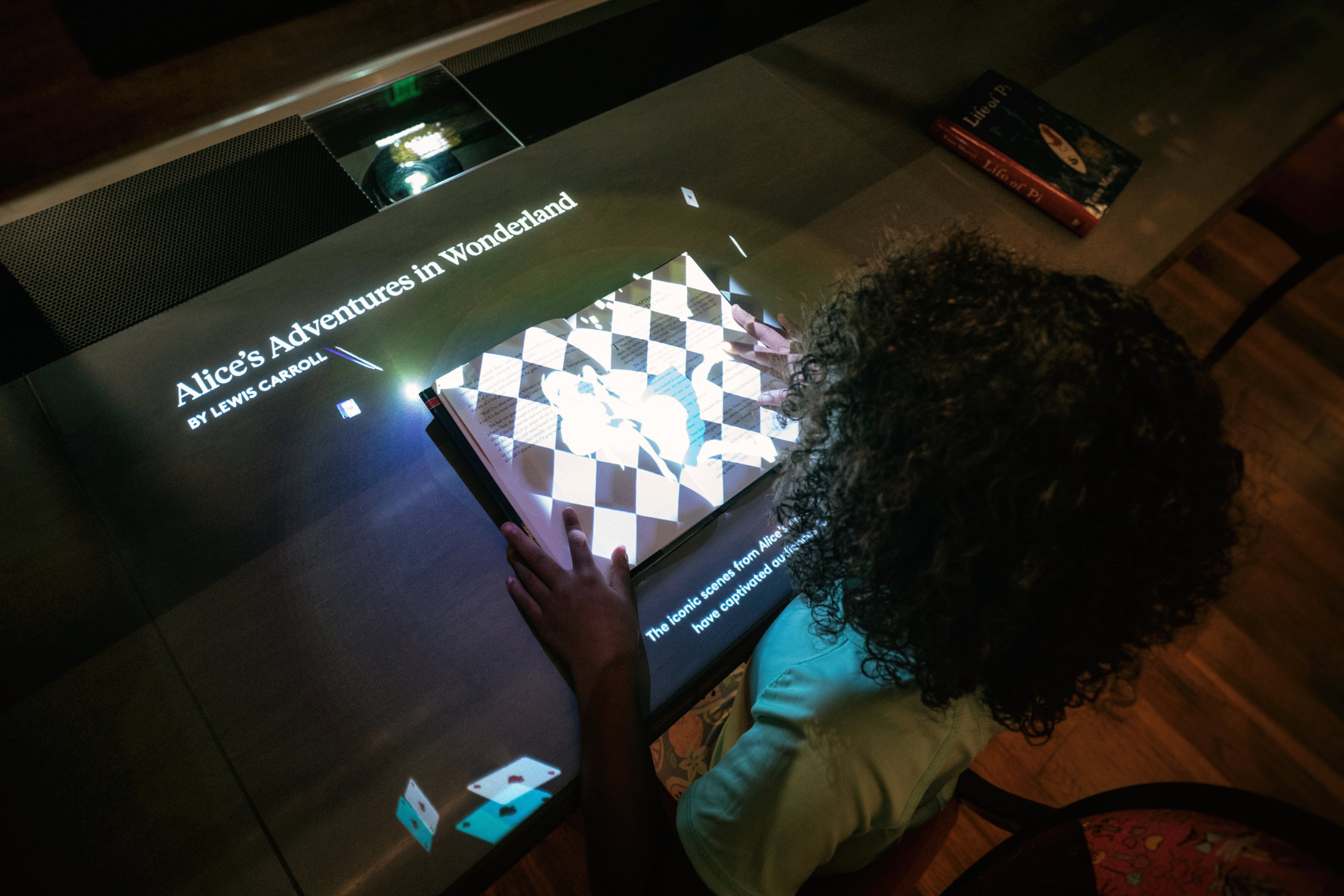 While most of the exhibits are permanent, the museum is currently holding a pop-up portal that connects visitors to other portals across the world using AV technology. Stepping into the portal is an opportunity to experience linguistics in action, and it has already been used to compare different French dialects in Paris, Canada, and French-speaking African countries. 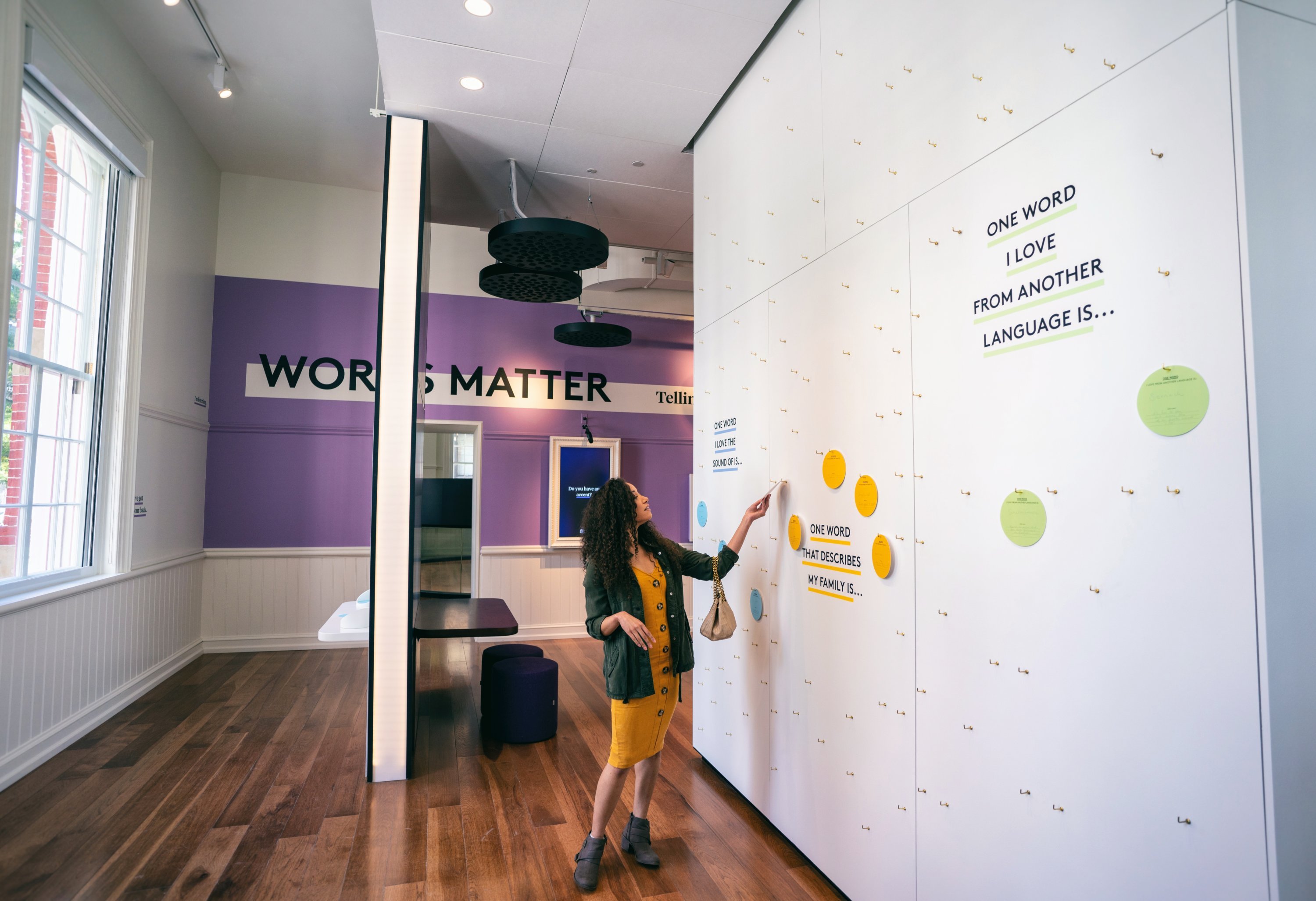 Even the physical building is rife with the spirit of learning. The Franklin School is where Alexander Graham Bell successfully transmitted the first photophone message, and while the museum’s technology far surpasses that invention, restored frescos and the original wooden beams in the top-floor event space nod to the building’s history.

“We were always trying to boost literacy and create a nation of readers and writers and people who appreciate words, the language and have the empathy for their fellow citizens and fellow Americans, and how they talk and their differences are appreciated, not ridiculed,” says Friedman. 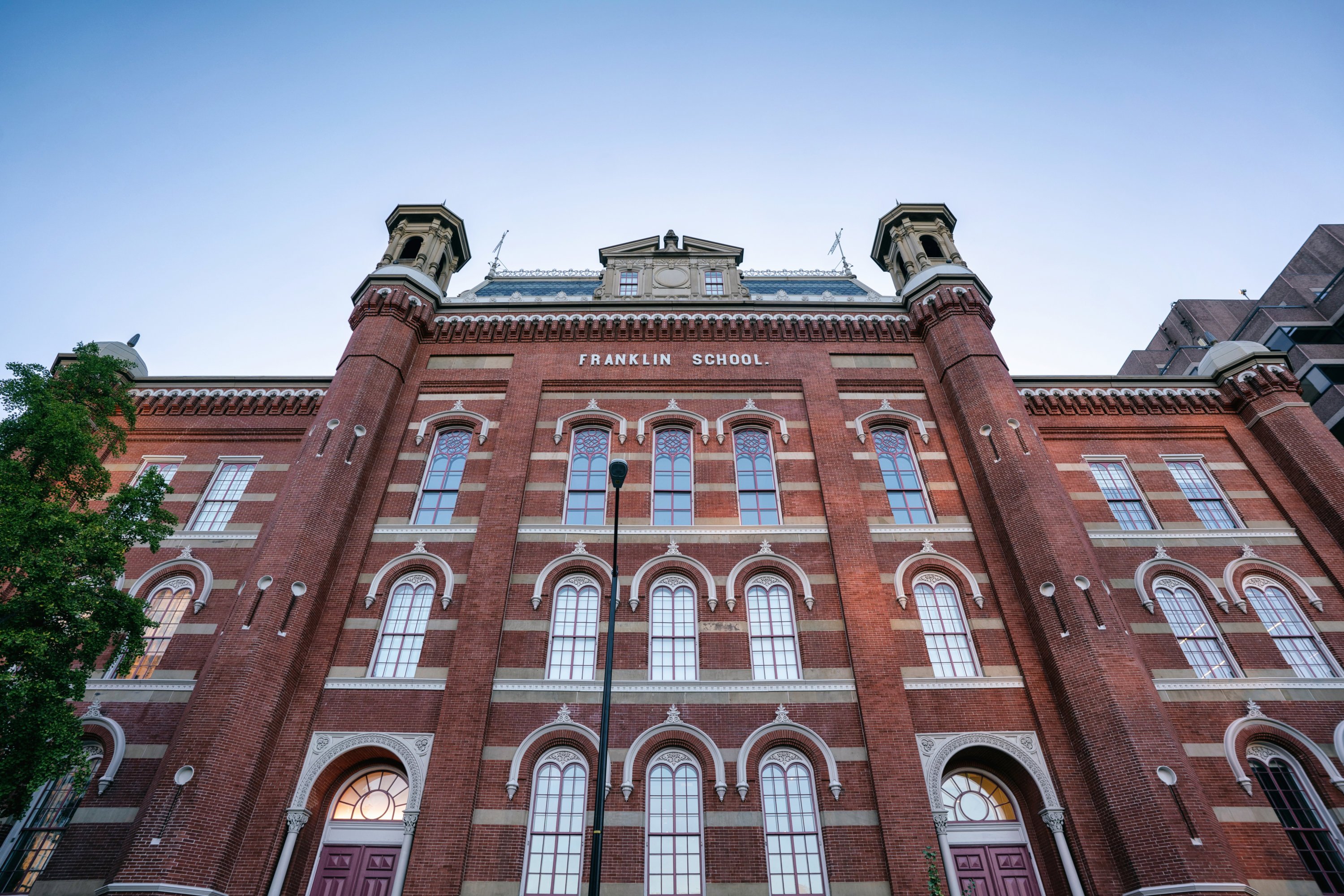 Daniella Byck joined Washingtonian in August 2018. She is a graduate of the University of Wisconsin-Madison where she studied journalism and digital culture. Originally from Rockville, she lives in Logan Circle.