Days before former Minneapolis Police officer Derek Chauvin is set to go to trial in connection with the death of George Floyd, the Minneapolis police chief said he’s  continuing to share a message with his team: “We can never go back to how we used to operate in the days before.”

“Undoubtedly the events of May 25 have changed certainly not only Minneapolis, but I would argue to say it’s certainly changed in our lifetime the role of policing and conversations about race and the American institution of policing forever,” Minneapolis Police Department Medaria Arrandondo said.

Arrandondo was one of four black Minnesota police chiefs who participated in a panel discussion Friday about current issues in law enforcement and the future of the profession. St. Cloud Police Chief William “Blair” Anderson was among them.

Arrandondo said he’s proud of the men and women in the Minneapolis Police Department, but considers this an opportunity to improve. 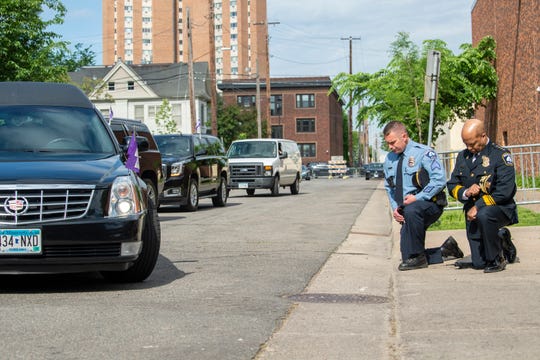 “Our communities are leaning in and they’re asking us questions about, do we value them?” Arrandondo said. “Are we truly committed to changing a profession that, particularly for African Americans and other BIPOC communities, has not served them well or, quite frankly, has seen them as invisible?” he said.

Department of Public Safety Assistant Commissioner Booker Hodges, who moderated the discussion, said of the 10,923 police officers in Minnesota, fewer than 250 are members of the National Organization of Black Law Enforcement Executives — NOBLE — Northstar Chapter. And out of 411 municipal police departments, four have African American chiefs, he said.

“I do believe that as a discipline, whether we have been forced to do so or not, there will be some changes, and some of the changes are long overdue,” Anderson said about changes in the wake of Floyd’s death. 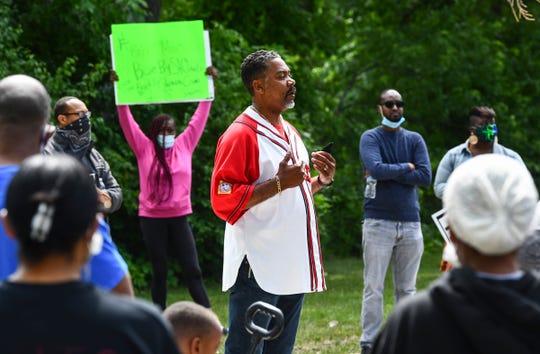 He deemed one proposed change unfortunate: elected officials proposing and passing public safety legislation that Anderson said he feels is not sustainable.

Anderson said he’s not sure a “wholesale” redesign of how police do their work is necessary in all departments. He’s hoping state and federal officials will listen to police about what change could be meaningful, substantive and sustainable.

“All of us know that 99% of the men and women who go out and do this job do it the right way for the right reasons,” he said. “And sadly enough, we all get judged by the transgressions of the few.”

As a person of color, he said, that’s particularly disturbing to him.

“We know what that feels like to be judged by your worst element,” he said.

What needs to change?

“I think that we need to be cognizant of the fact that this uniform is a symbol of a lot of things, and they’re all different,” Anderson said.

“We need to be cognizant of that when we are talking about making changes moving towards the future,” Anderson said.

Several of the panelists stressed their belief in the importance of community outreach. Frizell said a police department should reflect the community in its officers. When officers are connected to the communities they serve, he said, it can change their perspective on appropriate actions for a specific situation, rather than perhaps operating out of fear or misunderstanding.

New said community engagement also gives officers a chance to not only build relationships but to give officers an opportunity to explain the profession.

Taking control of the narrative

According to Arradondo, law enforcement needs to do a better job at branding itself — at driving a positive public perception by being more active in controlling the narrative of how police are thought of and described.

“I don’t think we as a profession have done this, or certainly not done it well,” he said. “I think oftentimes when an unfortunate incident occurs, we tend to hunker down and wait for the storm clouds to blow over, but that’s problematic because one it allows others to then take the narrative, and two, we are now trying to play catch-up.”

“We can throw all the money we want at these problems, but if we don’t do this, in my opinion, in a joint manner where we come together with our communities to decide what we want in terms of values in our police department, we’re going to continue to have these problems,” he said.

Anderson said he’ll continue to fight for change in expediting the process to terminate employment for officers who do something egregious enough to warrant that.

“There are too many people in law enforcement who are doing this because they got their ass kicked in the schoolyard,” he said. “And they put on a badge and they get to drive the car with the lights and they get to take revenge. We’ve all seen it. And those are not the people that we want in this profession.”

He believes in due process, Anderson said, but also that the profession should be treated with reverence.

“The one thing we do not do is strip human beings of their dignity, and if you do, you’re gonna have to come see me and it’s not gonna be pleasant,” he said.

The pool of black officers shrinks as outside the Twin Cities metro. Anderson said there are fewer than 80 black law enforcement officers outside the metro.

So when Anderson came to St. Cloud, he nixed a written civil service exam.

He said it was “hell” with the unions (“like walking through fire”) but that he did so because the system kept pushing the same candidates forward.

He replaced that system with an education and experience review that gave candidates points for things like work in a group home.

“I’m happy to say that, you know, (St. Cloud has) about a 10% population demographic people of color, and our department reflects that right now,” he said. 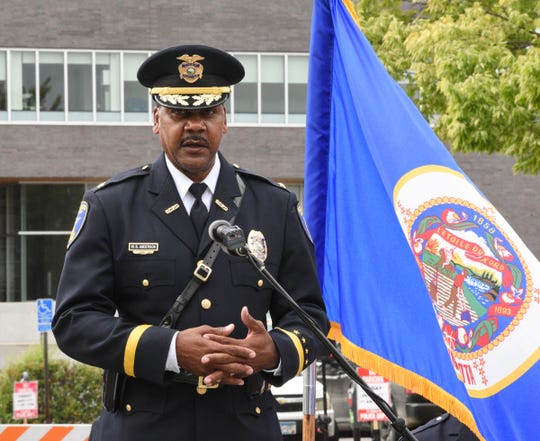 Anderson said he also created a pipeline with St. Cloud State University that recruits students of color in the school’s criminal justice program into an internship program that provides a comprehensive look at the department and then a move to part-time community service officers.

If the department likes the students, Anderson said, those students go to the top of the hiring list.

“Basically, they get dibs,” Anderson said.

“I don’t have much nice to say,” Anderson said, and as such, said he wouldn’t say much on the matter.

But he encouraged supporters of the Black Lives Matter movement to look into what some agencies were doing before judging. He spoke of community partnerships the police department has made, the department’s community engagement division and its work with children of color in the community.

“I say give us a call before you make a judgement, and come and see us and ask how we can work together,” Anderson said.

“We don’t have competing interests,” he said. “They have similar interests.”

In many instances, Frizell said, people have had experiences that justify the frustration they feel.

“It’s our job in law enforcement to recognize that some people have that right to feel the way they feel, and it opens us up to partnerships and liaisons to work together to make sure that as we build these 21st-century police departments, that everybody’s interests, including Black Lives Matter, are addressed, understood, and we show empathy (for) what this type of movement stems from in the first place,” Frizell said.

The future of law enforcement

Policing has its highs and lows, Frizell said. Right now is not a high.

“But now we have a road to climb to get back to the top of that curve and make sure that we continue to go forth and do great things as a state,” he said.

New asked his fel low law enforcement leaders to focus on not just hiring black law enforcement officers, but also in helping them navigate to career success. Most of those in the meeting likely won’t be in the room in five or 10 years, he said, as they retire.

He encouraged those looking to do more in their careers to find a mentor they trust to help them go further.

Sarah Kocher is the business reporter for the St. Cloud Times. Reach her at 320-255-8799 or skocher@stcloudtimes.com. Follow her on Twitter @SarahAKocher.

An interactive meal with a celebrity chef