in Entertainment
Reading Time: 3min read
A A

The duo said they chose to visit Ghana because

Two American siblings who survived a well documented massacre of Black people in the US city of Tulsa in Oklahoma have rounded up a visit to Ghana by accepting to be citizens of Ghana.

107-year-old Viola Fletcher and her brother, 100-year-old Van Ellis are quoted to have said: “We accept it with great joy and we thank the president for this great honour.”

They arrived in Ghana earlier this week as part of a tour of the continent to mark the 100-year anniversary of the 1921 incident popularly referred to as the Tulsa Race Massacre.

Reports indicate that some 300 Blacks were lost in the chaos that underlined the massacre whiles their properties were also destroyed by a mob of white supremacists.

A BBC report noted that Viola Fletcher, known as Mother Fletcher and her brother Van Ellis, known as “Uncle Red”, have been in Ghana since Saturday – visiting historic sites including the Osu Castle Dungeon, where enslaved Africans were kept before being shipped abroad during the transatlantic slave trade.

Traditional naming ceremony for Mother Viola, others held in Accra

The Ghana Tourism Authority in collaboration with Diaspora Africa Forum and Osu Traditional Council on Thursday, held a naming ceremony for Mother Viola Fletcher, Hughes Van Ellis(Uncle Red), and other 18 diasporans in Accra.

The ceremony was organised to honour Mother Fletcher 107, and her 100-year-old brother, and other African Americans who survived the race massacre and also tighten the bond and connection to Ghana.

Speaking at the ceremony, Mr Mark Okraku Mantey, Deputy Minister of Tourism Arts and Culture welcomed the diasporans and said the choice of Mother Viola, Uncle Red, and the entire team to visit Ghana was a step in the right direction.

He appreciated the hardship the Diasporan had to go through to come this far, adding that the George Floyd incidents and others meant it was not over yet.

Mr Mantey said the coming of the Diasporans was tied to the “Year of Return” and “Beyond the Return” initiatives, for them to reconnect, invest and help build their homeland.

“The naming ceremony we are having for our brothers and sisters is to reconnect with them and welcome them back home and also to review their identities as Africans and Ghanaians to be precise”, he said.

He said, “Ghana is a hospitable country and am sure you have seen places, wore Ghana, eaten Ghana and heard Ghanaian music, share the word that Ghanaians love people especially blacks”.

Ambassador Erieka Bennett and other members of the Diaspora African Forum said they were delighted and excited to see Mother Viola, Uncle Red, and their family in Ghana even in their old age.

She said Mother Viola and Uncle Red combined meant 207 years of history and experience of the Diaspora and an embodiment of the strength and resilience of the African spirits, adding that the history made would live forever and the young ones would come to hear of it.

Nii Kwabena Bonne V, Osu Alata Mantse said the naming ceremony was a Ga ceremony, and such ceremonies were done for their people who came back from the European countries.

He said during such ceremony, a Godfather and mother were chosen for the people being named, hence himself and Professor Esi Sutherland-Addy would stand in as such.

“Mother Fletcher was named Naa Lameley and Uncle Red as Bio Lantey while the others were also given a Ga name.”

They were all given a certificate to show their new names. 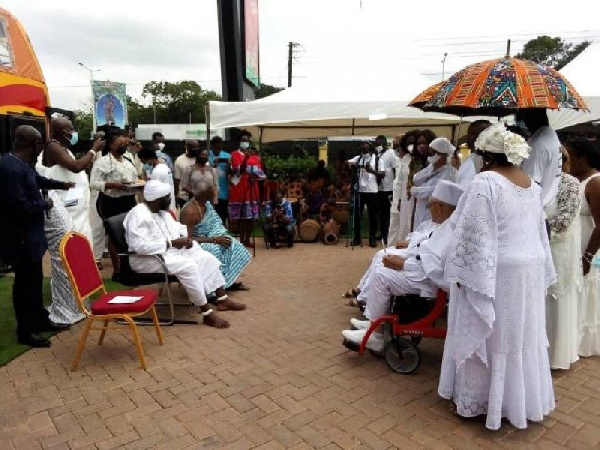 The Universal Level Playing-Field For The Black Race! –Odegbami

All THAT nonprofit offers free afterschool services to Columbus teens

All THAT nonprofit offers free afterschool services to Columbus teens