Some 19th-century banjos from the Collection of Jim Bollman. Photos: R. J. Phil. 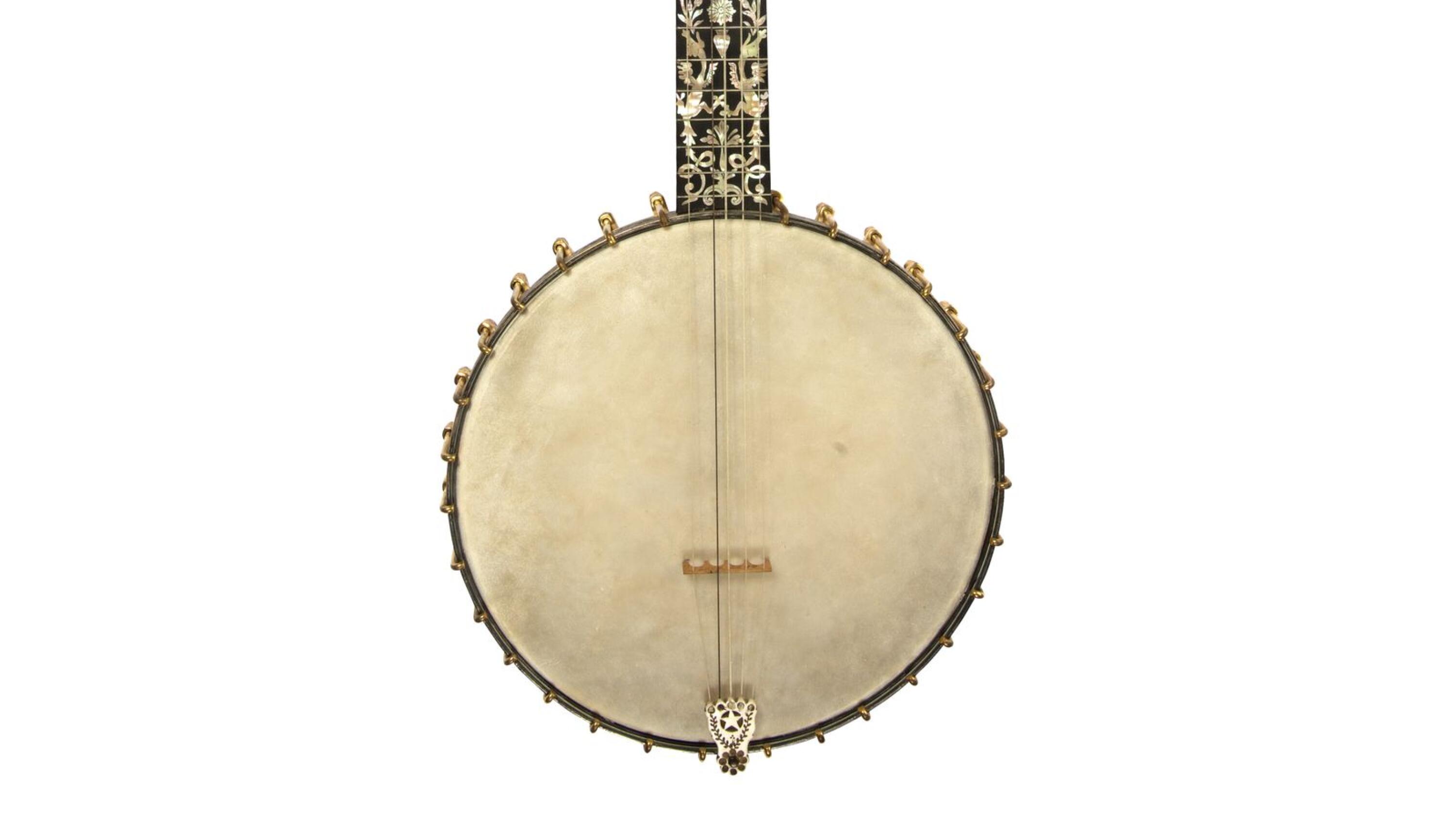 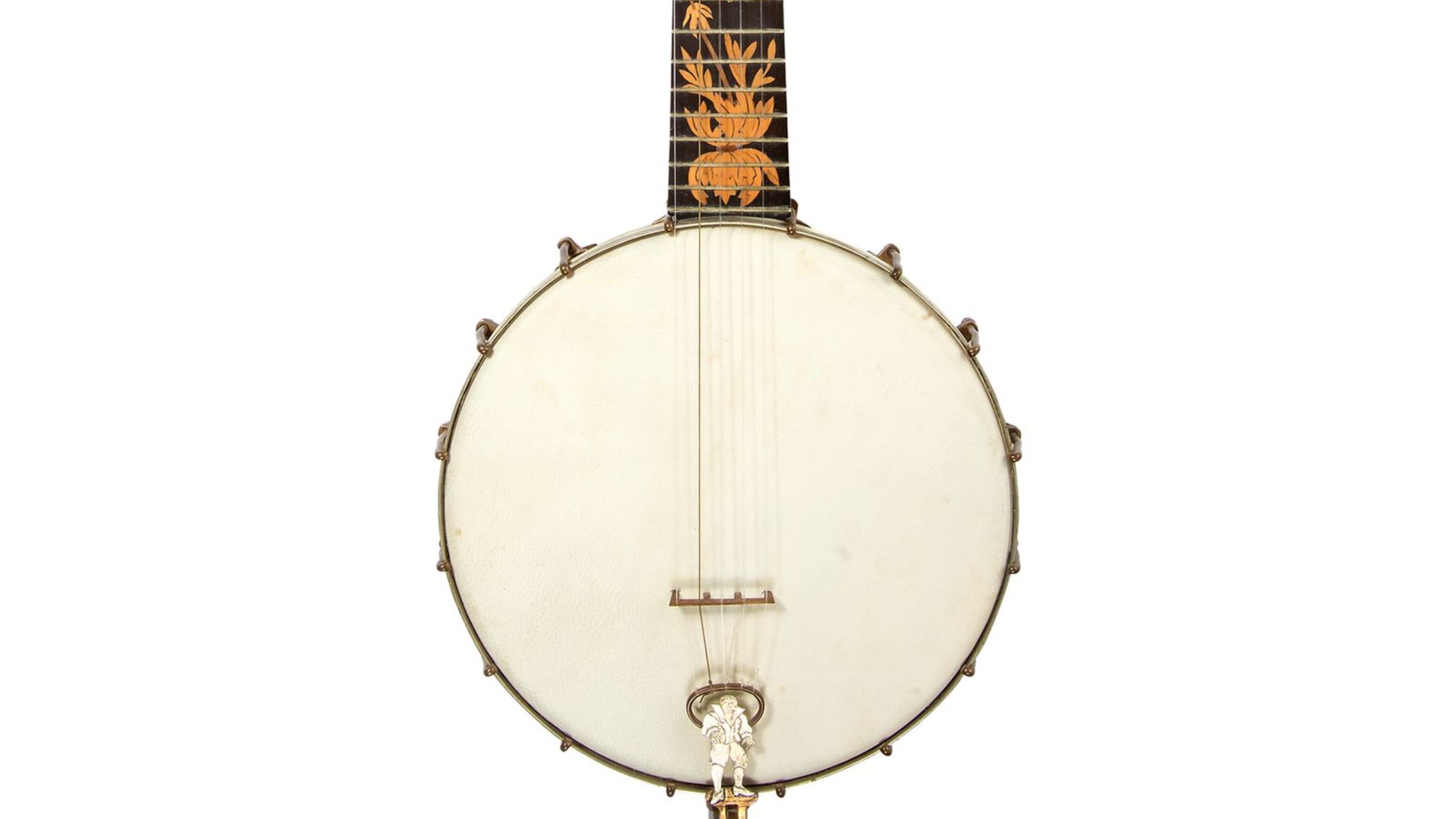 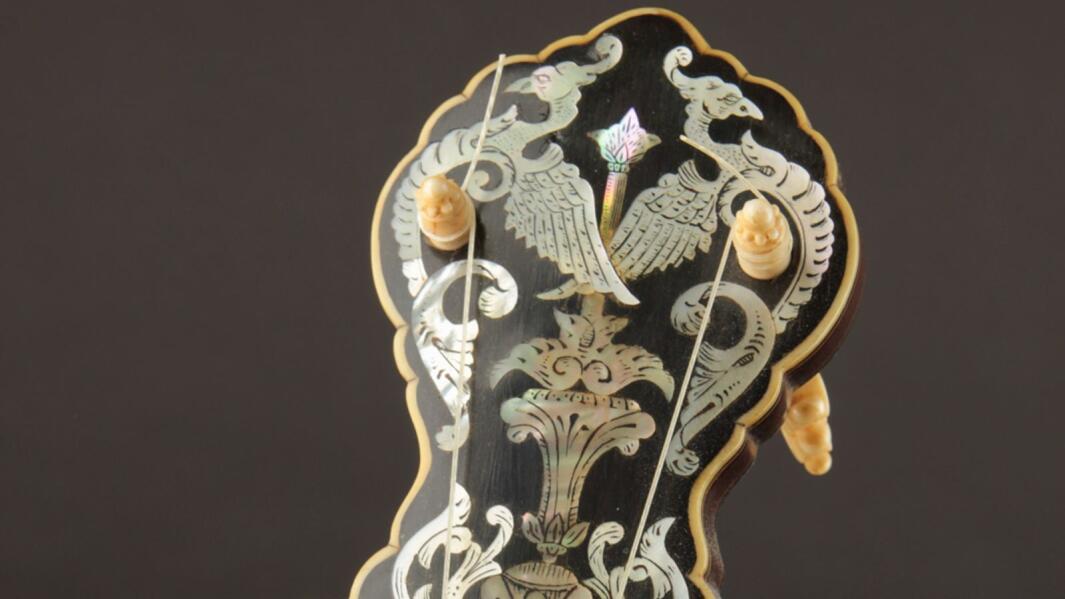 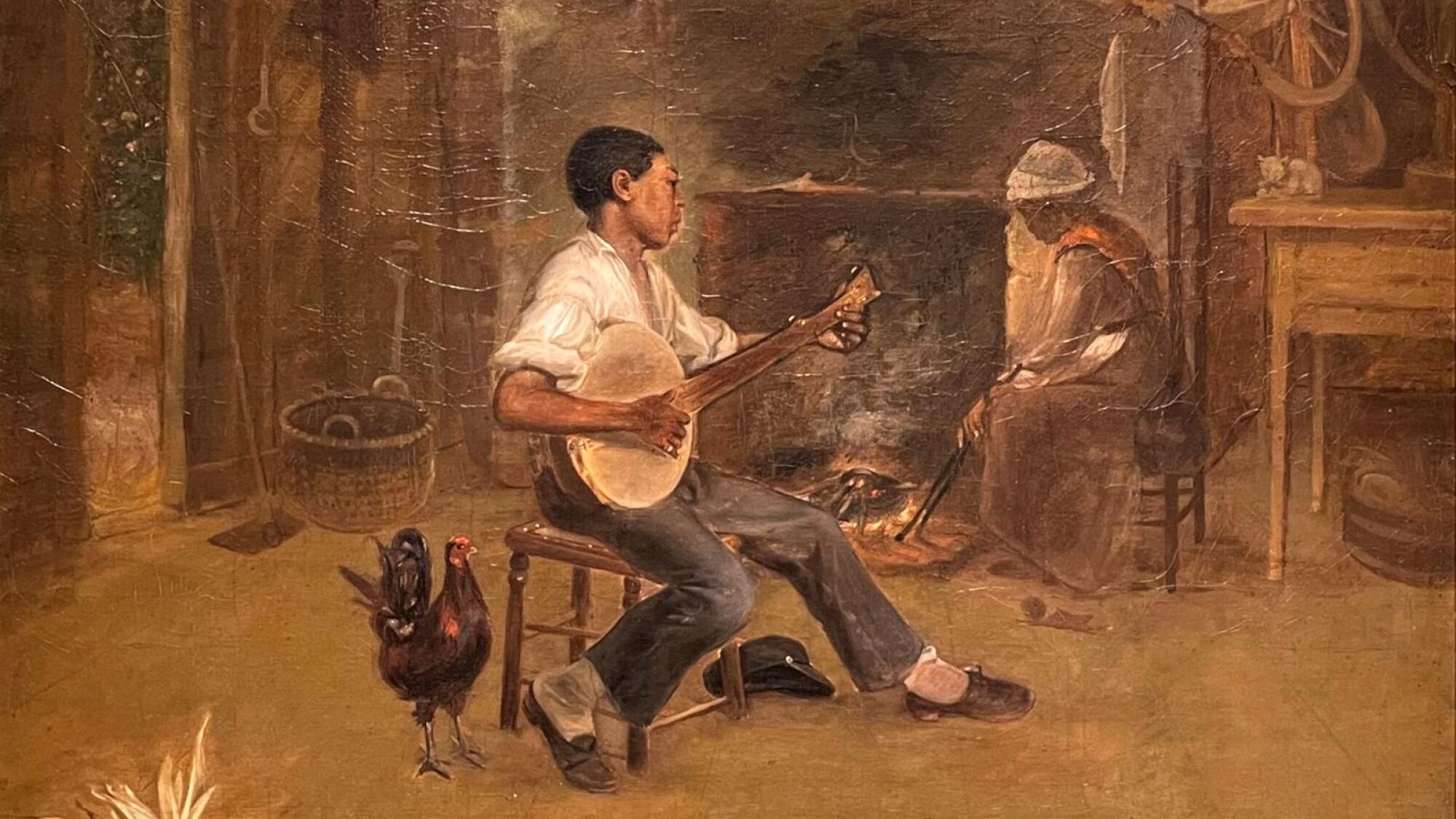 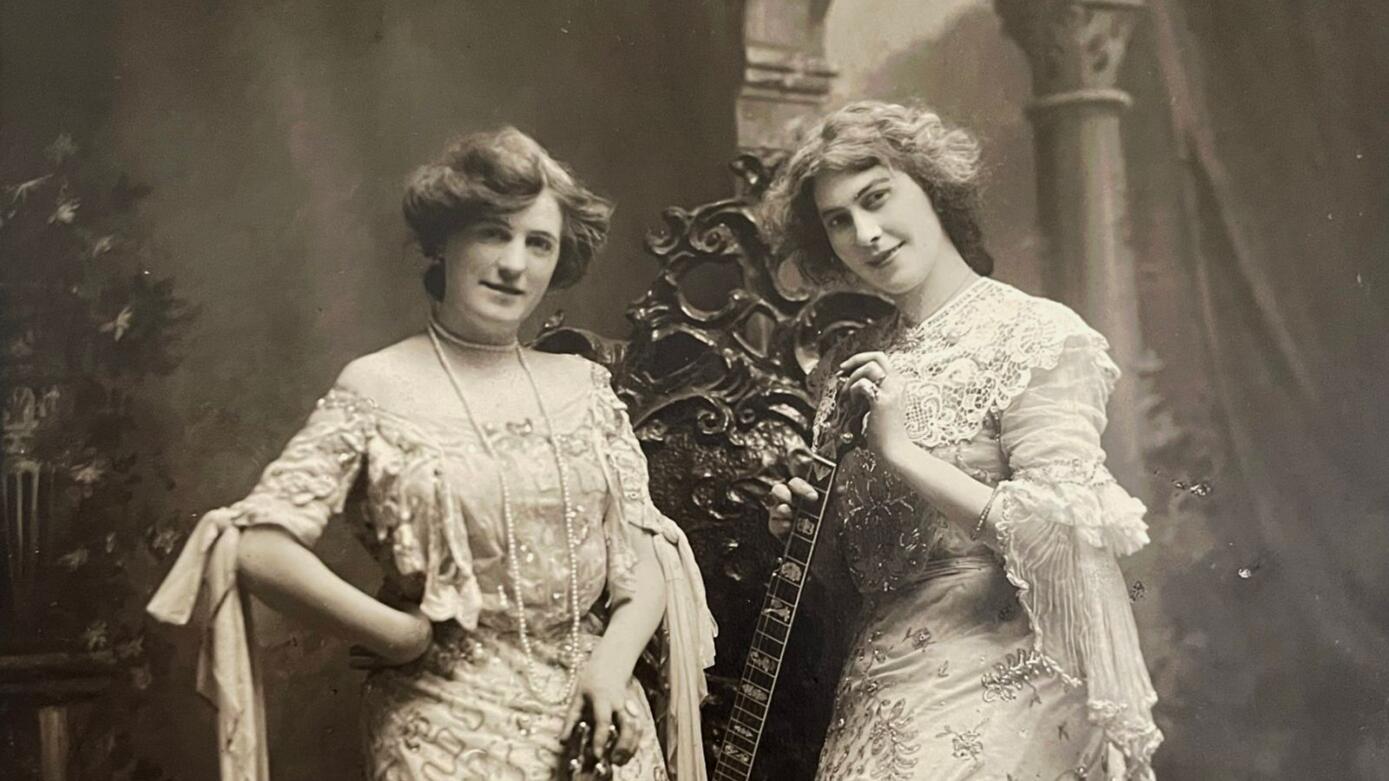 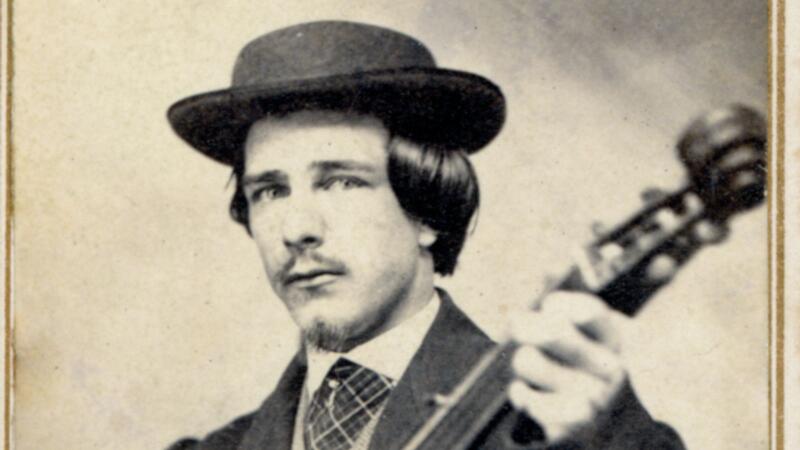 Mark Twain supposedly said, “A gentleman is someone who knows how to play the banjo and doesn’t.”

That line is as telling as it is funny. In its long history, the banjo has sometimes gotten second-rate treatment.

An exhibition at the Lyman Allyn Art Museum explores part of that history, and it’s a window on 19th-century U.S. society. The story reflects social, artistic and business trends as well as attitudes toward race before and after the end of slavery.

“America’s Instrument: Banjos from the Jim Bollman Collection” is not about the silvery sounds beloved in country music and Dixieland jazz. That came later. This is the instrument’s origin story, from its roots in Africa to the dawn of the 20th century. In those early years, the banjo traveled a surprising path.

The title reflects the fact that it’s the only major instrument that developed in the United States; others were imported fully formed from Europe.

“The banjo really doesn’t have … anything similar to it in the old world,” said Bollman, a Boston-area resident who owns the 55 or so instruments on display. They tell the story of its evolution over decades.

The ancestors of the banjo were plucked lutes played in Africa. Often using a gourd as a body, they were adapted by Africans brought as slaves to North America.

Several instruments are recognizable as proto-banjos, including the akonting, played by the Jolo people of the Senegambia region. It’s a gourd covered with goatskin and a cylindrical neck that supports two long strings and one short one.

The leap from that to the modern banjo was complete by the 19th century. What distinguished the banjo from its cousins the guitar and mandolin was a calfskin or sheepskin head used as the sound board instead of hardwood. And banjos typically had one of their five strings shorter than the others.

The first mention of one is from 1687, and in older references, the name is rendered as bangie, banza or banjer. A gourd-body banjo is seen in a 1785 watercolor of slaves performing a West African stick dance. Later, gourds were replaced by wooden hoops that formed the drum-like body. The round neck evolved into a flat fingerboard, and frets were added.

What lifted the instrument from plantation to stage was the minstrel show, the main form of 19th-century American popular entertainment. One of minstrelsy’s central features was demeaning portrayals of African Americans by white performers in blackface. We still wrestle with its uncomfortable legacy.

But minstrel shows played an important role in the banjo’s development after players, some of them Black, introduced it around 1840. The instrument became part of the minstrel musical ensemble, joining fiddles, tambourines and rhythmic clappers called “bones.”

Guest curator Darcy Kuronen said the minstrel era was the toughest part of the story to tell with sensitivity. He was aided by a just-published book called “Well of Souls: Uncovering the Banjo’s Hidden History,” which offered insights into the culture of slavery.

The instruments seen from this period are of primitive design by self-taught makers, their variations reflecting the era’s lack of standardization. Though typically plain, the necks were sometimes adorned by patterns. One shows hammers and tools, another has hearts, diamonds and crescents.

After the Civil War, something strange happened: The banjo made a fast climb into respectability in white society. Recognition of musical potential led to its acceptance as a sophisticated instrument, with improvements in playing technique and a better repertoire of original compositions.

“It went from the minstrel show to Carnegie Hall in just a couple of decades,” Bollman said.

But it was still so associated with the Jim Crow South that Black musicians started to leave it behind.

This shift is reflected in the visual arts. The exhibition includes several paintings that show the banjo as primarily a Black instrument. In an oil on canvas by George Fuller, a young boy strums in his humble home as a woman tends a fireplace. The scene is free of stereotypes.

By comparison, photographs capture the banjo’s growing popularity with white Americans. It was a frequent prop in portraits from the 1850s to the 1870s. One of many on view shows a small boy in an adult suit of clothes, and his banjo also looks too big for him.

Increasing interest led to innovations in how banjos were made. The first patent was awarded in 1859, and more followed. An important temporary change was the enclosure of the body with a wooden panel to enhance the sound.

Amid these improvements, different types of the instrument evolved. Popular in the 1890s was the Mandoline-banjo, a patented hybrid with the pear-shaped body and spruce sound board of a mandolin. It was advertised as “the new society instrument.” Then there was the banjeurine, slightly smaller than a standard banjo and tuned a fifth higher. Smaller still was the piccolo banjo, tuned up a full octave. There were even miniature banjos too small to be played.

Examples of all have been gathered by Bollman, a banjo fan since the 1960s. A lifelong collector of different things, starting with burned-out light bulbs when he was little, Bollman, 79, said he was drawn to the banjo by folk and bluegrass music.

But his taste is for the aesthetics and workmanship of earlier models, not the modern four-string type introduced around 1915. Bollman said he pioneered the collecting of 19th-century banjos, which were affordable since there was little interest. That allowed him to create a serious collection, numbering about 200, from the 8,000 he’s bought and sold.

“This is sort of the cream of the crop of the instruments I’ve culled,” he said.

The nature of Bollman’s interest shaped the scope of the exhibition, said Kuronen, a former curator of musical instruments at the Museum of Fine Arts in Boston. Kuronen was planning a broader banjo exhibition there before he retired and was asked by Samuel Quigley, the Lyman Allyn’s director, for a scaled-down version.

Drawing just on Bollman’s collection, which he called “absolutely outstanding,” made the most sense, he said, but that meant forgoing the 20th century for a deeper look at the 19th. This produced a cliffhanger ending.

When we leave the story around 1900, the banjo is playing the soundtrack of high society, exemplified by tuxedoed banjo clubs on every college campus. It’s also become an objet d’art as top-of-the-line “presentation banjos,” inlaid with mother-of-pearl ornaments, are crafted individually for connoisseurs. Meanwhile, standard models are produced on an industrial scale to meet demand.

What happened next? The exhibition’s end points to an imminent new direction as surprising as the instrument’s postbellum rise.

There’s a look at how the banjo would be maligned in humor, possibly due to the clinging odor of minstrelsy. Mark Twain’s crack reflects how its image was conflicted despite its new prestige, but in a later gag, the prestige is gone. A bulletin-board ad asks, “Want to learn to play the banjo?” while tear-off tabs underneath, instead of bearing a phone number, all say “No thanks.”

The last instruments seen are a radical departure from the gleaming, factory-precision products of the late 19th century, though of the same era. “Mountain banjos” from Appalachia hold no trace of the sensation the instrument had become. They are a throwback, with wooden, octagonal bodies framing tiny sound boards.

How it got there is a whole other story.

What: “America’s Instrument: Banjos from the Jim Bollman Collection”