Tony Magee never forgot where he came from. The roots of the former Battle Creek Central High School football player, who went on to play professional football, grew deeper Wednesday with the delivery of 40,000 pounds of food, through an organization he belongs to, that will be available to city residents in need.

The food distribution effort, which takes place from 11 a.m. to 2 p.m. on Saturday at New Level Sports Ministries, is a partnership between Magee’s organization, The Black 14 Philanthropy, and the charitable arm of the Church of Jesus Christ of Latter-day Saints, headquartered in Salt Lake City Utah.

The local delivery was made to New Level, one of nine nonprofits nationwide, that have each received 40,000 pounds of food provided by Latter-day Saints Charities for similar distribution efforts. Those other nonprofits are located in Laramie and Ethete, Wyo.; Charleston, S.C.; Wilmington, N.C., Denver, Colo.; and Baltimore, Md.

Mel Hamilton, a member of The Black 14 Philanthropy, says organizations were selected based on the needs of the areas they serve. 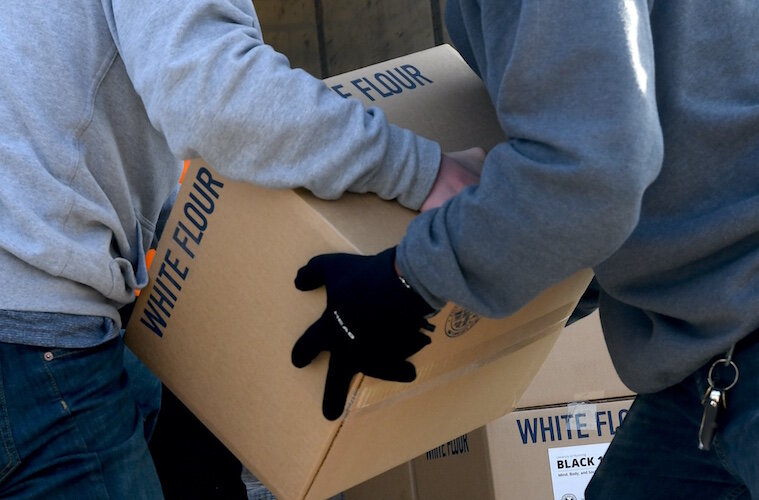 On Wednesday morning volunteers from churches throughout Battle Creek, including the Church of Jesus Christ of Latter-Day Saints, New Level Sports Ministries, unloaded and stacked a truckload of donated food for distribution over the coming weekend.“The Black 14 got together and decided which cities to choose because they know the severe need in these cities,” Hamilton says in a media release.

Magee’s family attended Faith Assembly Christian Fellowship Church, which has since changed its name to New Level Church. New Level Sports Ministries is a sister entity to that church and the Magees were one of the founding families of that sports ministry, according to Will Fobbs, Director of Operations for New Level.

Chris McCoy is the Pastor of the Church and Executive Director of New Level Sports Ministries.

“Pastor McCoy knows Tony and he’s been having a dialog with him about what Black 14 could do to help the community,” Fobbs says.

Volunteers at New Level on Wednesday unloaded pallets holding the boxes of food off of a truck. They are expected to pack up more than 750 individual boxes of food today (Thursday) and Friday that will be given to families and individuals throughout the greater Battle Creek area. Each box will contain canned fruits and vegetables, flour, pasta and other staples. 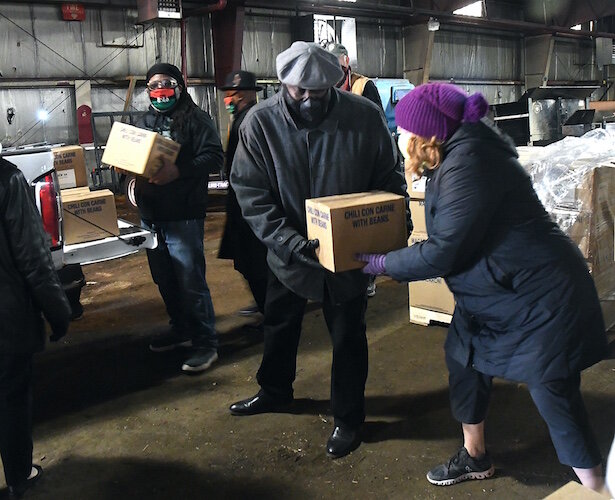 On Wednesday morning volunteers from churches throughout Battle Creek, including the Church of Jesus Christ of Latter-Day Saints, New Level Sports Ministries, unloaded and stacked a truckload of donated food for distribution over the coming weekend.“Our goal is to try to blanket the community with food,” Fobbs says. “We have centered it around Washington Heights where there is the greatest need.”

Fobbs says a direct mailing about the food distribution was sent to close to 2,700 families identified as in-need. Of those, he says he expects about 30 percent to show up on Saturday, which is how he determined the number of boxes that will likely be given away.

But, he says, “Until this line ends, we’re going to keep handing out boxes.”

Some of the boxes also will be given to organizations including VOCES, Truth in Action and the Burma Center for distribution to families they have identified, Fobbs says.

These organizations are among several that are part of a Catalyst for Community Giving initiative funded through grants from the W.K. Kellogg Foundation and the United Way of the Battle Creek Kalamazoo Region. 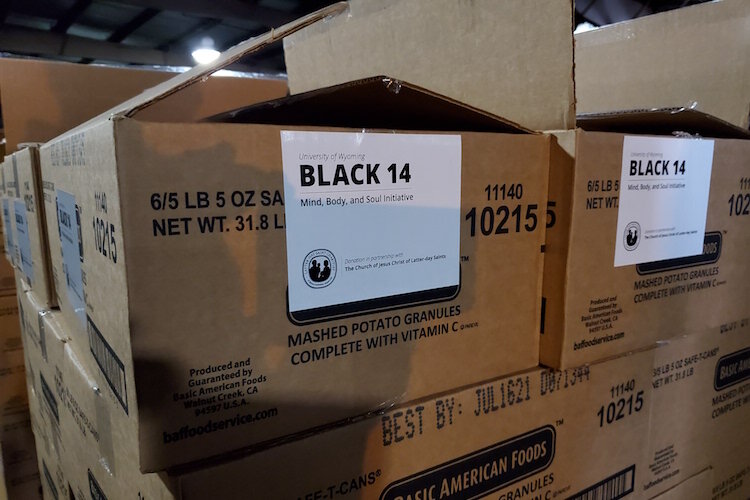 On Wednesday morning volunteers from churches throughout Battle Creek, including the Church of Jesus Christ of Latter-Day Saints, New Level Sports Ministries, unloaded and stacked a truckload of donated food for distribution over the coming weekend.“We are very specific about addressing the needs in the community,” Fobbs says.

Among those needs is Personal Protection Equipment that will be distributed Saturday along with the food boxes.

The PPE is being provided by STEWART Industries, one of Battle Creek’s oldest African American-owned businesses, through the Healthy Battle Creek Campaign. New Level received more than $200,000 in state funding through the Michigan Coronavirus Task Force on Racial Disparities to distribute the PPE and educational materials in the Washington Heights neighborhood, home to 60 percent of Battle Creek’s Black population, the demographic most affected by COVID-19.

McCoy says the majority of those residents have limited access to quality PPE, and they struggle with rising unemployment, poverty, and lack of access to healthcare.

“Many Battle Creek organizations have worked throughout the pandemic to deliver as much coronavirus relief funding as possible, despite limited resources,” McCoy says in a media release. “The funding provided through the Rapid Response Initiative will save lives in our community by providing much-needed PPE to families, especially during the holidays which could become super-spreader gatherings.” 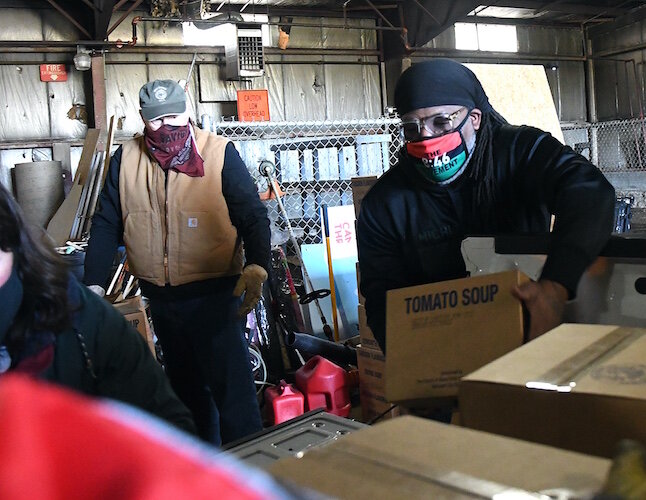 On Wednesday morning volunteers from churches throughout Battle Creek, including the Church of Jesus Christ of Latter-Day Saints, New Level Sports Ministries, unloaded and stacked a truckload of donated food for distribution over the coming weekend.STEWART Industries has been assembling 1,200 initial PPE Resource Kits for delivery prior to Thanksgiving. Fobbs says each kit contains 100 disposable masks, 100 pairs of nylon gloves, two 32 oz. pump bottles of hand sanitizer, and 160 sanitizing wipes. It also has information about stopping the spread and the MI COVID Alert app.

“The COVID-19 pandemic has disproportionately impacted communities of color in Michigan,” says Erick Stewart, president of STEWART Industries, in a written statement. “African Americans represent nearly 14 percent of the state’s population, yet they represent 40 percent of the deaths from coronavirus. Our community is literally dying due to lack of resources and access to care. The New Level Healthy Battle Creek campaign will save lives through the distribution of PPE with the help of key community partners.”

“Connecting and partnering with residents of Washington Heights is the most crucial piece. Ultimately, we can ensure successful project execution by delivering on our partnerships with at-risk individuals, who need access to PPE, and young students, who will need virtual learning resources,” McCoy says.

Once funding is in place for the Healthy Battle Creek initiative, New Level, its partners, and stakeholders will finalize strategic community partnerships with economic development partners, and the larger ministry community to ensure success, McCoy says.

A partnership that began with a protest

Unlike the partnerships being forged by New Level, the collaboration between The Black 14 Philanthropy and Latter-day Saint Charities began after a protest in which Hamilton and Magee and 12 other members of the 1969 University of Wyoming football team were kicked off the team when they asked to protest a policy of The Church of Jesus Christ of Latter-day Saints.

The University of Wyoming was scheduled to play against Brigham Young University, which is owned and operated by the Church of Jesus Christ of Latter-day Saints, but the day before that game — Oct. 17, 1969 — Wyoming’s head coach Lloyd Eaton dismissed the 14 players when they appeared at his office as a group wearing black armbands on their civilian clothes. The players were protesting the LDS policy then in force that barred black men from the priesthood.

The group later became known as The Black 14 and they recently formed a philanthropic organization which goes by the same name.

“When you go through something like that, a lot of people get hurt. A lot of organizations get hurt. I must do everything I can to plaster all the cracks made in the walls of that relationship. All it was, was a rift. Not a hate,” Hamilton says. “My mom said, ‘God will tell you what to do. All you have to do is listen.’ So, I’m listening.

“I want people to understand the loving relationship that The Black 14 and The Church of Jesus Christ of Latter-day Saints are trying to initiate. I want people to realize that we’re working together, and will continue to work together, to strengthen the love between people — even people with differences.”

The local food distribution effort is the result of the dedication both organizations have to working together to help others.

The truckloads of food staples delivered to New Level and the other nonprofits were dispatched from a central storehouse in Salt Lake City. Every pallet of food will bear a logo or stamp with the words: “University of Wyoming Black 14; Mind, Body and Soul Initiative; Donation in partnership with The Church of Jesus Christ of Latter-day Saints.”

“Standing arm in arm with New Level and Black 14 is absolutely paramount to our mission to build bridges with our brothers and sisters of every race and nationality,” says Rick DeVries, a banker who lives in St. Joseph and serves as a regional leader with the Church of Jesus Christ of Latter-day Saints. “This is such an important thing to be involved with, particularly in these divisive times.”

The church is organized geographically with local congregations called Wards. Local volunteer clergy who serve as Bishops preside over the Wards, DeVries says.

The storehouse housing the donated food is a much larger example of smaller-scale operations that the church has.

“It’s a lay church and there are 124 bishop’s storehouses throughout the world and those storehouses are like mini-grocery stores where shelves are stocked with food and commodities for those in need,” DeVries says. “Any church member in need can go to a Bishop who will work with them on a plan to get them back on their feet. The Bishop can provide them with food, toiletries, and whatever else they might need.”

On the first Sunday of each month church members fast and donate what they would have spent on food for that day to a Fast-Offering Fund, DeVries says.

“The church also has a nondenominational organization called ’JustServe’ where any member of a community from around the world can download the app and type in their zip code which gives them access to local nonprofits in need of service or assistance,” he says. “This is our way of providing that ongoing support.”

Bishop Nick Rowley, who lives in Battle Creek and works for the Kellogg Co., says his congregation seeks out opportunities to contribute to meet needs in the community. He says the food distribution represents a larger opportunity to make an impact in the community.

“On an individual level, members of our church aspire to be followers of Jesus Christ and we all strive to emulate how he treated those in need,” Rowley says. “On a macro level, the church has a mission to provide relief to any community in this world.”

He says that COVID-19 has impacted individuals in all communities, which has impacted their ability to work, and many of those who have lost their jobs are afraid to work because of the potential for getting the virus. While not unique to Battle Creek, he says it tends to compound what’s already going on here.

“We want people to know that we can come together and work together in this time of crisis,” Rowley says. “COVID has taken a toll, but even before that, we were seeing some racial tensions. We want our community to come together and recognize that we are all children of God and we should be working together to bring relief.

“This event is helping to support people in our community. We don’t just want to support. We want to help and build bridges.”

To see more about the effort to distribute food and PPE visit here.

Individuals with questions about the food and PPE distribution should call New Level Sports Ministries at (269) 964-4172.

Photos by John Grap, unless otherwise indicated. See more of his work here.

America’s Rifle | An Official Journal Of The NRA