The First Steps Towards Inclusiveness in Racing

On a sparsely traveled road in downtown Lexington, African Cemetery No. 2 sits encircled by a worn iron fence. The sounds of cars flashing by nearby busier streets, the incessant barking of a neighboring dog and the harsh droning of a drill from the adjacent auto parts shop carry through the isolated eight-acre plot.

Opened in 1869, the site now contains over 5,000 graves, of which fewer than 600 are recognized with markers. The plot inters hundreds of enslaved African Americans, as well as members of the U.S. Colored Troops in the Civil War. It is the burial grounds for attorneys, political activists, doctors, lawyers and, some of the best jockeys the Thoroughbred racing world has ever known.
Leon Nichols, the co-founder and CEO of the Project to Preserve African American Turf History, has traversed the grounds many times.

“These were people who made lasting impacts on society and rallied their knowledge together to carve out a space in their respective fields,” he said. “These people gave us a legacy that they created in the most trying of times in America, but they still prevailed and left us with a tremendous amount of stories that we can forever hold onto and help shape future generations.”
A native of Lexington, Nichols grew up hearing the tales of many of the equestrians laid to rest at the site. Much of his family, from uncles to brother, were involved in the industry as trainers, grooms and hot walkers.

It’s just something that was always a part of our family heritage,” he recounted. “As a kid, I grew up following in those footsteps and hanging around the racetrack and working on the farms. I guess what really struck me is that being in those environments, everyone talked about the contributions of African American jockeys and trainers back then, but as a young kid, I never saw any representation.”

As time went on, Nichols was continually struck by the minimal recognition given to those African American jockeys who defined the early years of horse racing. He said there was always a thought in the back of his mind that perhaps there was something he could do to help bring their stories to light.

In 2007, while working at the Kroger Distribution Center in Louisville, Nichols was approached by co-workers Calvin Davis and Jerry Fife. The men had heard about his racing background and wanted to learn more.

“We just felt like there needed to be representation in terms of the African American contributions to horse racing,” Nichols said. “The overall mission is that we wanted to find ways that we could integrate the history into the equine industry and really have some outreach to set up the next generation in terms of learning about this forgotten past.”
Through this outreach in educating the general public, the program hopes to widen horse racing’s audience.

“We wanted to reconnect the fanbase and show the collective contribution of people of color to the sport, as well as make the sport more relevant than what it is currently,” Nichols said. “I think the way you do that is through the narration of these stories and this history, and then you get a greater appreciation of the sport, the Derby, and horse racing in general.”

Much of the history that the group aims to highlight is centered around the over 150 equine industry participants buried at African Cemetery No. 2.

Towards the back of the cemetery, beneath an ancient oak tree, a three-foot tall headstone commemorates the Lewis family.

Oliver Lewis was born into slavery in Lexington in 1856. While still a teenager, he became the first jockey to win the Kentucky Derby aboard Aristides in 1875. He was one of 13 African American jockeys in the 15-horse field, and would go on to run second with Aristides in the Belmont S. He never raced in another Kentucky Derby, and little is known about his life beyond that bright moment in the spotlight. Lewis died in 1924 and while records indicate that he was buried in a family grave at African Cemetery No. 2, his name is not listed on the family monument.

Just a few years after Lewis rode to victory in Louisville, James “Soup” Perkins was born in 1880 in Lexington. He began riding at the age of 11, and then at the age of 15 became the youngest jockey to ever win the Kentucky Derby, a distinction that he still shares with fellow African American jockey Alonzo Clayton, who was victorious in the prestigious event just three years prior. Perkins is buried in a family plot along with his brother Frank, who was a successful trainer until he was killed in 1900.

Perhaps the most famous person buried at the historic site is Isaac Murphy. Born into slavery in 1861, Murphy moved to Lexington with his mother following the Civil War. He would go on to ride in 11 Kentucky Derbies, and come out on top in 1884, 1890 and 1891.

“Isaac was able to communicate with the horse through his hands and his warm personality,” Nichols said. “He rarely used the whip, and was revered for his strict honesty.”

From 1892 through 1895, Murphy achieved an incomprehensible winning percentage of 44%.

“One of his biggest claims-to-fame was the overall impact that he had on the industry,” said Nichols. “You have to understand the times. Being in the 19th century, being an African American, he was able to really bring people together. White and Black alike flooded to see this man in all his glory, and what he brought to the sport of horse racing.”

Nichols said that Murphy was well known for his vibrant personality, and was always a favorite with the media because of his articulateness and honesty. He was also the individual that set the standard for fashion at the race track.

“He was the Michael Jordan or the Tiger Woods of horse racing,” Nichols said. “His legacy in the culture of racing is undeniably embedded in the sport, from fashion to etiquette. He was that transcendent figure in sport that really helped create opportunity for everybody.”

For most of his career, Murphy was revered as a celebrity, with appearances in newspapers and magazines, and his likeness displayed on tobacco cards. But before the turn of the century, rampant racism took its toll and he was resented for taking money and fame from white jockeys.

The eventual Hall of Famer was forced to retire prematurely due to health issues, and he died of pneumonia at the age of 35 in 1896. He was placed in an unmarked grave at African Cemetery No. 2. and for many years, his burial site was nearly forgotten. It wasn’t until 1967 when a researcher discovered the grave and his remains were exhumed and reinterred at the old Man o’War burial site, and then moved again to the Kentucky Horse Park in 1978. 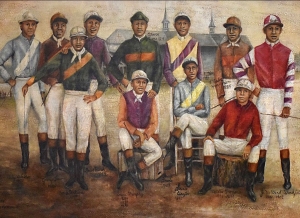 From 1921 to 2000, not a single African American was represented in the Kentucky Derby | Audrey Menefee

Despite this extreme absence of African Americans in the sport for nearly a century, Nichols said that the ripple effect of their talent and strong presence in those early days is still felt today.

“When we really get down to the nuts and bolts of it, these stories give us a lesson in terms of diversity and inclusion that I think is very relevant to today because it proves that we worked together then to help Kentucky’s signature industry become what it is today,” Nichols said. “It provides us with a blueprint to really amplify that message nationwide, especially in times like this.”

When PPAATH began their program fewer than 20 years ago, they knew that they would need a way to represent the important stories they were trying to share.

The artist had no background in horse racing, but was interested in sharing the unknown tales of African Americans in the industry. She found that there was not much to go off of in terms of information or images of the jockeys they wished to highlight, but still she was able to create a collection of over a dozen jockey portraits.

In 2010, the “Forgotten Black Jockeys” exhibit was featured at the National Black Arts Festival in Atlanta, Georgia.

The collection has traveled to several venues nationwide.

Another major undertaking for the program has been the Isaac Murphy Image Awards.

“We wanted to do something that was really going to bring Isaac’s legacy to the national stage,” said Nichols. “We created the Isaac Murphy Image Awards to honor prominent African Americans in business, education, entertainment and sports who left an indelible mark in their respective fields. We wanted to do that by bringing them to the Kentucky Derby, [so they could] learn a little bit of the history.”

PPAATH is now working to grow the span of their awards show, and is collaborating with production companies in hopes to make it into a national awards celebration that runs in conjunction with the Kentucky Derby. 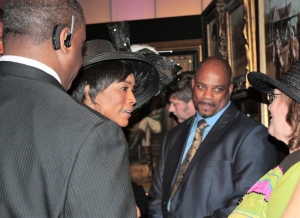 “We still think that this sport is one of the greatest sports in the world, and we want to add a diversity spin to it to help rein in new fan bases,” Nichols said. “It’s a foundational sport for everything we do today in North America, whether it’s the NBA or the NFL, horse racing in its earliest days set the foundation for a sporting culture that far exceeded anyone’s expectations. I think if we can get the sport back to its days of glory and prominence, but more importantly, its impact on diversity and inclusion, everyone wins in that situation.”

Beyond an induction to the National Register of Historic Places in 2004, African Cemetery No. 2 has seen little recognition in this century, even after the graves of those prominent jockeys were re-discovered. PPAATH has been working to change that. In recent years, they’ve partnered with the University of Kentucky to create on-site posters commemorating some of the historical figures laid to rest at the cemetery.

The headstones are still cracked and crumbling, the landscaping is still in need of much attention, but still, it’s a step. Through these series of small strides taken in collaboration, Nichols and his team are working to prevent history from rewriting itself, and initiate the growth of a more diverse horse racing audience.

“It has to be a collaborative approach,” Nichols said. “We have to learn that we can work with one another. This history, in terms of the legacies that we were left with, gives us that blueprint- that when we do work together, amazing things happen. We see an opportunity for this industry to take those very first steps of inclusiveness. It has to be an amicable approach. We have to learn to trust the fact that we can work together, and we can use this history as a frame of reference to help us do that.”

Major League Baseball has diversity problem and no clear solution