The September 4, 2020, episode of CounterSpin included an archival interview with sports journalist Howard Bryant about Black athletes and activism, which originally aired June 15, 2018. This is a lightly edited transcript.

Janine Jackson: Some may be surprised to see professional athletes and coaches speaking out against police killings of Black people. The Milwaukee Bucks basketball team launched a strike after the police shooting of Jacob Blake, quickly joined by other teams and the WNBA, which had already been taking visible actions in support of Black Lives Matter and racial justice. But despite the insistence of some that they “shut up and dribble,” Black athletes have a history of political engagement and making use of their powerful platform. We talked about that in June of 2018 with sports reporter and author Howard Bryant, who’d just written the book The Heritage: Black Athletes, a Divided America and the Politics of Patriotism.

JJ: I appreciate the way that the book enmeshes sports history in social history: Three days after Michael Jordan’s NBA debut in 1984 was the day the NYPD killed Eleanor Bumpurs, a 66-year-old Black woman with mental illness, for instance. Generally, the media separate sports, literally and figuratively, from everything else that’s happening. It’s an escape, it’s a different world and—key to the story you tell—sports, Americans tell themselves, is a meritocracy: We may have racial injustice in society, but by golly, on the field all that matters is, Can you run, or throw, or hit?

This idea that the job of the Black athlete is, in some ways, to advertise US equality, that’s there from the beginning of the history of the Heritage, isn’t it?

Howard Bryant: “The Black athlete is the most important and most influential and most visible Black employee in the 20th century, because they’re the ones who were allowed to integrate the society.”

Howard Bryant: It sure has been. And I think one of the things that’s been really interesting in trying to figure out how to tell this type of story—because there’s so much to it—is, where do you start, and how do you put this together? And for me, the genesis of this had been this revival of this Heritage. If you’re of a certain age, you remember Muhammad Ali, and you remember the memories, of course, of Jackie Robinson, and you remember Bill Russell, and all of these athletes: John Carlos, Tommie Smith, in the ’68 Olympics. You remember these players being very prominent, and you remember them being advocates for African Americans.

If you’re of a different generation, if you were, say, born in the ’80s, or even the ’90s, this revival—the appearance of athletes taking a political stance, being involved in their community, being involved in social issues on a national level—is completely foreign, because you grew up with the Michael Jordans and Tiger Woods being the model. So for me, what I thought was interesting and important was to remind people that the Black athlete has been involved in the political struggle from the beginning, and that these players have had a very special place in American history.

The argument that I make in the book is that the Black athlete is the most important and most influential and most visible Black employee in the 20th century, because they’re the ones who were allowed to integrate the society, whether it was the military, whether it was education, whether it was swimming pools, it was the ball players who came first. And because of that, they’ve had a responsibility to stand up and to advocate. So we recognize it when they’re not there, and we remember them when they are. 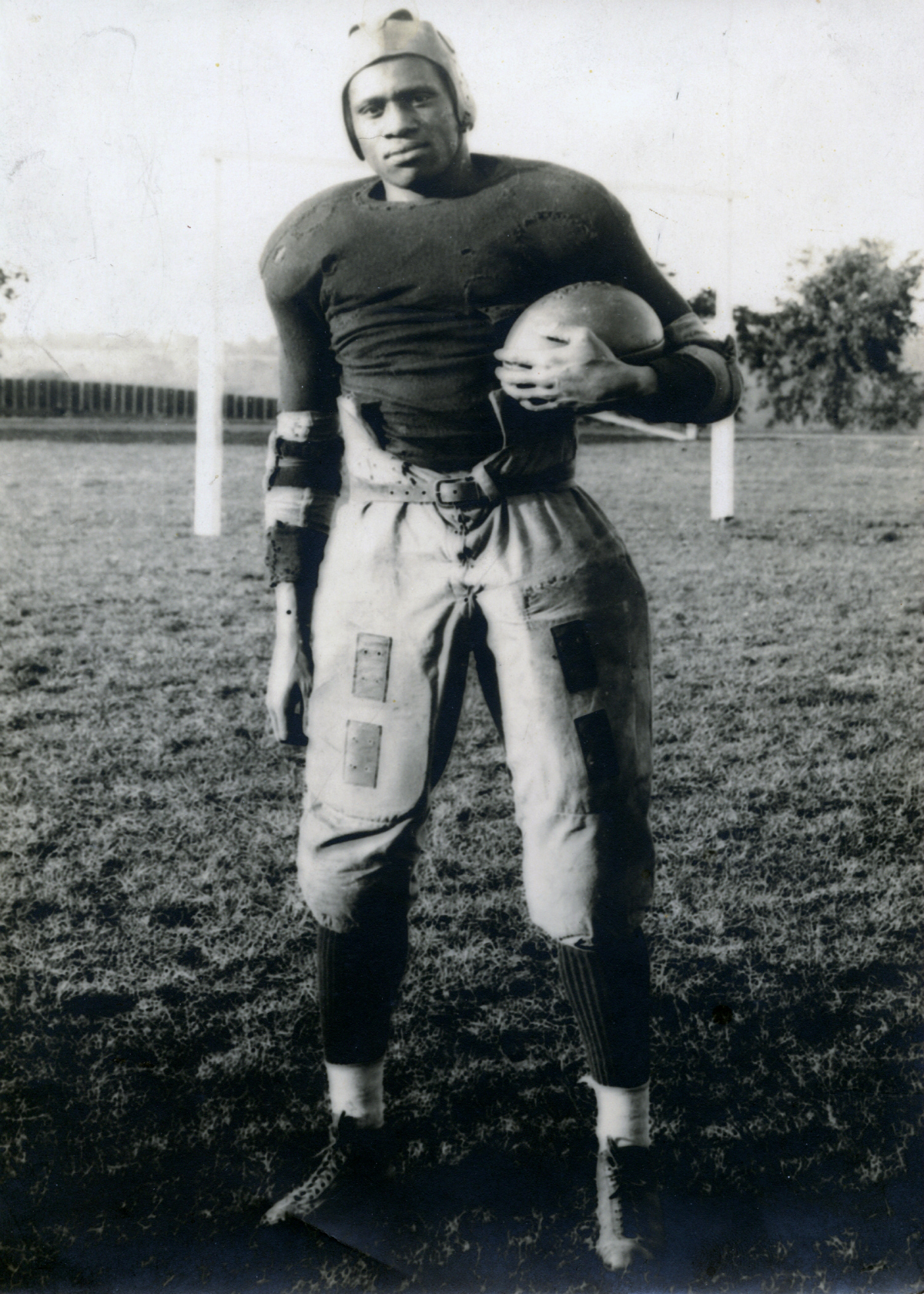 JJ: And with that comes this bind, this visibility as a real representation of integration, and yet still being a Black American. And in terms of the history and the beginning, I think a lot of folks would be very, very surprised to hear that it starts with Paul Robeson.

HB: Absolutely, it starts with Paul Robeson, and of course people don’t realize that he played in the National Football League. He played football before he was the great baritone, before he was the great singer and the great actor and the great activist. And one of the only reasons that he left professional football was because the National Football League was integrated, and then it chose segregation until 1946.

So when he played in 1921 and 1922, football was integrated, and then by 1923, no Blacks were allowed to play in the NFL for another quarter century.

So it wasn’t until much later, it wasn’t until you had Robinson in that testimony, receiving all of the attention for his denouncing Paul Robeson, but also inside of that testimony, he talked about inequality and police brutality and mistreatment of African Americans and fairness, and all of these things that would become the foundations of this Heritage. It started with Robinson, but not along racial lines to begin with; it started with defending America.

JJ: I find Robinson’s HUAC testimony to be maybe the most moving part of the book, and such a clear—first of all, a thing that’s so misremembered. 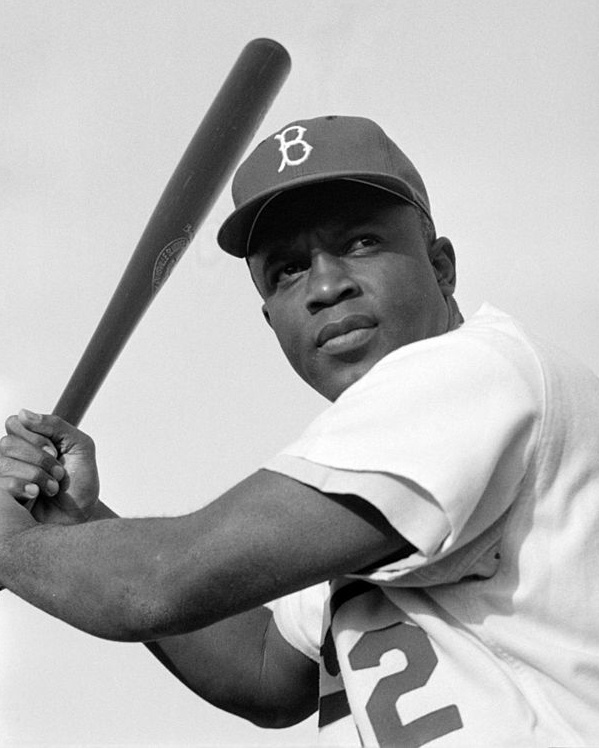 HB: Completely. We chose to emphasize the parts that made America feel good. Which was, “See, Jackie Robinson is a real American, because he denounced Paul Robeson, the bad Negro Communist.” I don’t even think we misremembered everything; we just chose to ignore it. And when I started to read that testimony, when I was doing the research, I was wondering, “Did I know this?” I think I kind of knew this, but maybe I really didn’t, either.

HB: And that’s what we do. We decide to omit. One of the great favorite colleagues and the great writer David Maraniss once said to me that, “History writes people out of the story, and it’s our job to write them back in,” and I think that Robinson testimony is something that needed to be written back in.

Well, history’s moving along, and owners and teams are aware that integration is happening, but I like how you note that this idea that became popular, and still holds sway, that, “Oh, they’re only looking for the best players,” that that was fiction, always. And there’s this note that Earl Wilson, when Earl Wilson was signed to the Boston Red Sox, the scouting report described him as a “well-mannered colored boy, not too black, pleasant to talk to.”

So you have this story of integration. But then, Black athletes are making money—and some of them are making a tremendous amount of money—and so that gives them a bigger megaphone, and at the same time, more calls not to use it.

HB: For caution, absolutely, and I think that’s this tension that the Black athlete has that even other Black entertainers don’t have. Why are we now talking about Oprah Winfrey as a potential presidential candidate? Because she has money. We talk about Mark Cuban as a presidential candidate or Donald Trump as president or Michael Bloomberg as the mayor of New York, because they were all rich. When it comes to the Black athlete, though, what we want from them in exchange for the money is silence.

We don’t want to hear from them. We want them to be quiet. We want them to shut up and play, or shut up and dribble, and this is the one area where money is not affording you a bigger voice. And that goes back to this very interesting relationship that we tend to have with our sports figures. That there’s an ownership to them, that they don’t necessarily get to be citizens. Their job is to entertain us.

And I think that’s one of the areas where this Heritage has become so polarizing in a lot of ways, is this feeling of ownership is now colliding with the fact that you have this new generation of Black athletes—post–Trayvon Martin, post-Ferguson, post–Eric Garner and –Sandra Bland—who are now citizens, especially thanks to the prevalence of social media. They’re watching these viral videos, just like the rest of us are, on YouTube, and they’re looking at this dashcam footage.

And one of the things that one of the players, Tavon Austin, had said, who played for the St. Louis Rams, when he came out in 2014 with the “hands up don’t shoot gesture” before a game, was:

It’s hard for me to go back to my community knowing that this is going on, knowing that I’ve got a platform, and all my friends and family are looking at me, going, “People listen to you and you’re not saying anything.”

Janine Jackson: That was sports reporter and author Howard Bryant speaking with CounterSpin in June of 2018.

Diversity is key to business innovation

CC Biz Buzz: Where are the accountants? – Columbia Daily Tribune