Mr Cotton lives in Milwaukee, a city in a battleground county in a battleground state. He turned 18 on June 1, days after the country erupted into protest after a white police officer killed Minnesota resident George Floyd. The black teenager, who participated in a march this month, did not appreciate the president’s impulse to protect officers who “fight back” against protesters.

“When Donald Trump gave police the green light to do whatever they need to handle their obligations that really inspired me to register to vote,” he said.

This summer’s protests for racial justice appear to be one factor motivating black voters in Wisconsin to head to the polls. Mr Trump won the state four years ago by fewer than 23,000 votes after Hillary Clinton did not campaign there and a restrictive voter ID law depressed voter turnout. Milwaukee, in particular, accounted for more than half the state’s drop, with voter participation falling more in black areas than white.

Mr Trump has used the civil unrest to advance a message of “law and order”, which is appealing to some Republican Wisconsin voters. But for many black residents, who usually vote Democratic, the protests have sharpened their resolve to vote.

Marchers walked 33 miles from Kenosha to Milwaukee on Tuesday, the first day of early, in-person voting in Wisconsin, to encourage voting. The journey took about 18 hours. Kenosha police officers shot and paralysed Jacob Blake Jr, a black man, in August. The shooting led to protests and riots, where an Illinois man shot and killed two protesters. Members of the Blake family participated in the march.

“We have got to turn our anger and grief and frustration into our votes,” Gwen Moore, a Democratic Congresswoman representing Milwaukee, said at the rally that concluded the march.

Democratic voter registration spiked nationwide in early June after the George Floyd protests began, said Tom Bonier, chief executive of Democratic data firm TargetSmart. Across the country “voters of colour are turning out at higher rates and are very engaged . . . There’s not one single impetus, but it’s reasonable to assume that [George Floyd] is an important motivating factor.”

As of Thursday morning, the number of African Americans who voted nationwide had increased 144 per cent over the same point in 2016, according to TargetSmart’s data. The number of white early voters grew 133 per cent.

In the countdown to the 2020 election, stay on top of the big campaign issues with our newsletter on US power and politics with columnists Rana Foroohar and Edward Luce. Sign up here

Lower turnout among black voters in 2016 contributed to Mr Trump’s victory, said Lilly Goren, a political-science professor at Carroll University in Wisconsin. Turnout among black Wisconsin voters fell from 74 per cent in 2012 to 55 per cent in 2016, while turnout dropped 2 percentage points among white voters, according to a 2017 study from the liberal think-tank Center for American Progress.

Democrats want to ensure the voters activated during Barack Obama’s two successful presidential campaigns show up again in 2020. Party strategists and social justice activists are trying to channel the energy from the protests into electoral politics.

Wisconsin required registered voters to show current identification for the first time in 2016, which low-income and minority citizens are less likely to have. The state, which ranks high nationally for voter participation, had turnout drop by 41,000 in Milwaukee.

A 2017 study from the University of Wisconsin-Madison found that for the counties containing the state’s largest cities, 11 per cent of registered voters were deterred from voting by the new requirements. That translated to as many as 23,000 people.

Inattention from the Clinton campaign and a lack of funding for get-out-the-vote efforts was also a missed opportunity, said Rev Greg Lewis, executive director of Milwaukee organisation Souls to the Polls. The 23,000-vote gap between Mrs Clinton and Mr Trump — “we could have got that with 12, 14, 15 churches”.

“The Democratic Party takes the black vote for granted, and the Republicans, they don’t even bother,” he said.

Low-income, black residents in Milwaukee are more concerned with personal struggles than either presidential candidate, and many distrust the existing power structure, Rev Lewis said. It is hard to persuade them their vote matters. Souls to the Polls is attempting to harness the energy from the protests and to excite potential voters by focusing its message on building power at the local level.

Video: US 2020 election: Trump vs Biden and the African-American vote

“We certainly will be voting for a candidate on November 3, but on November 4 the work really starts,” he said.

Not everyone is impressed. A survey of black voters in swing states, including Wisconsin, found that among 18- to 29-year-olds, 47 per cent planned to vote for Biden, a sharply lower percentage than older voters. Another 21 per cent said they would not vote at all.

JoHanna Skildum, a black Milwaukee resident in graduate school in Iowa, attended several protests this summer. She and her peers feel as if Mr Biden has been foisted upon them by their parents and grandparents, but they plan to vote for him. 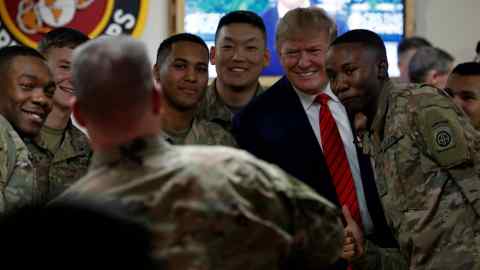 “Honestly, that Joe Biden campaign shirt ‘Settle for Biden’? It resonates with all of us,” she said.

Mr Williams, who is black and lives in the Milwaukee suburbs, said he plans to have no more than four people at once in his seven-person van, to maintain social distancing, and he has purchased masks and gloves for riders.

“People are saying, if my life is on the line to vote out the current administration so that my grandkids could live with equality, then I’m going to put my life on the line, because I am going to vote,” he said. “If my van runs out of gas, we’re going to push it to the polls.”

Buying power was a catalyst to a better life for African Americans.

Buying power was a catalyst to a better life for African Americans.

The Five Questions for Building Your Black History Program (Opinion)