Dr. Murtaza Akhter says an experimental drug used to treat President Donald Trump for COVID-19 is “not a cure” despite what the president says. Trump was treated with Regeneron’s antibody drug and he credited it with improving his health. (Oct. 8)

WASHINGTON – President Donald Trump on Saturday sought to fire up Black and Latino supporters at the White House in a campaign-style rally that focused on his administration’s support for law enforcement, his first public event since testing positive for COVID-19 more than a week ago.

“I’m feeling great, I don’t know about you,” Trump said in an 18-minute speech while standing on the Blue Room balcony overlooking the South Lawn.

In order to protect the lives of Black Americans and all Americans,“you have to have your police support you,”Trump said.

“Every day more Black and Latino Americans are leaving behind left-wing politicians and their failed ideology,” he said.

Trump spoke before a sea of supporters, many of whom wore masks and red “Make America Great Again” campaign hats, in an event billed as a “peaceful protest for law and order.”Most of the crowd wore blue t-shirts for a “Back the Blue” pro-police demonstration that was organized by the Blexit Foundation, a conservative group founded by Candace Owens and aimed at encouraging African Americans to leave the Democratic Party.

Hundreds of people attended the event even as the White House continues to deal with an outbreak of the coronavirus that has infected several of the president’s personal aides. The White House did not say whether the president tested negative before the event.

In his pitch to Black voters on Saturday, he pointed to economic-related initiatives to support the  Black community and attacked his Democratic challenger Joe Biden.

“If you think he can run this country, you’re wrong,” he said of his opponent.

“If the left gains power, they will launch a nationwide crusade against law enforcement and they’ve already done that,” Trump said, echoing some of his campaign’s central themes. “Taking their funds away, their firearms, their fundamental authorities, taking everything away, including your freedom.”

As questions loom about the president’s health, Trump appeared to have no shortness of breath and did not pause to cough and clear his throat as he did in a Thursday night interview with Fox News’ Sean Hannity. The nearly 20-minute speech, however, was a marked departure from the president’s typical hourlong campaign speeches. 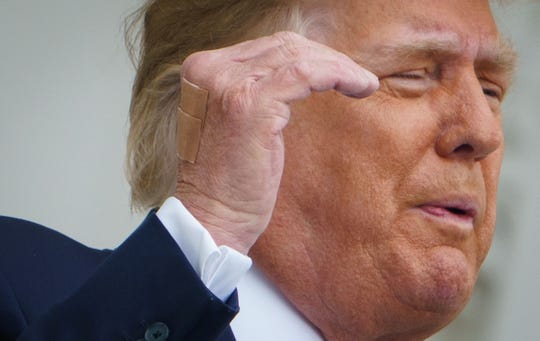 Bandages are seen on the back of his hand as US President Donald Trump speaks from the South Portico of the White House in Washington, DC during a rally on October 10, 2020. (Photo: MANDEL NGAN, AFP via Getty Images)

The president’s speech comes a day after he said he was “medication-free” in an interview with Fox News medical contributor Dr. Marc Siegel, but added that he didn’t know the results of his most recent coronavirus test, which he said was administered earlier on Friday. He told Siegel he was “either at the bottom of the scale or free” of coronavirus and said he was being tested every few days.

The White House has repeatedly declined to say when Trump last tested negative for COVID-19 prior to his positive test result last Thursday that resulted in a three-night stay at Walter Reed National Military Medical Center.

In his Fox News interview, Trump said he was hospitalized because he “didn’t feel strong” but claimed he didn’t have trouble breathing. The president’s doctors said they administered supplemental oxygen last Friday after Trump experienced a drop in blood oxygen levels. 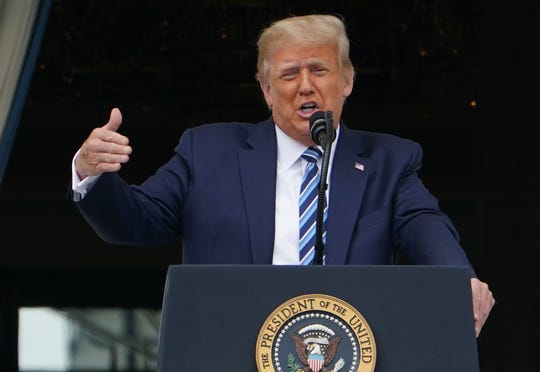 US President Donald Trump speaks about law and order from the South Portico of the White House in Washington, DC, on October 10, 2020. (Photo: MANDEL NGAN, AFP via Getty Images)

Trump has not been seen publicly since his release on Monday, except for his Fox interview and a series of videos released by the White House throughout the week.

A White House memo released Thursday night announced that Trump had completed his course of therapy for COVID-19 “as prescribed by his team of physicians.” White House physician Dr. Sean Conley cleared Trump to return to public life on Saturday, 10 days since his diagnosis.

The event takes place not far from a Sept. 26 ceremony to mark the nomination of Judge Amy Coney Barrett to the Supreme Court, which may have resulted in a “super spreader” event as several attendees tested positive.

Though the event was held outside at the Rose Garden, the majority of the 180-plus people in attendance sat close to each other for an extended period, and most didn’t wear masks. There were smaller indoor gatherings as part of the occasion.

More: Super spreader events: How do they cause COVID-19 outbreaks and is the White House now a hot spot?

More: Trump campaign’s pitch to women voters: Let’s get back to pre-pandemic ‘normal’

The event kicks off Trump’s return to the campaign trail as he tries to regain momentum with a little more than three weeks until Election Day on Nov. 3. The president will hold a rally in Sanford, Florida, on Monday – his first such rally since Sept. 30  – as well as one in Johnstown, Pennsylvania on Tuesday and in Des Moines, Iowa on Wednesday.

Biden told reporters while traveling to Erie, Pennsylvania, for a campaign event Saturday that Trump should make sure that he’s not continuing to shed the virus and should tell his supporters to socially distance once he resumes his rallies next week. The former vice president said he tested negative Saturday morning.

“I think it’s important that he make it clear to all the people that they should be socially distanced, they can be on the lawn, that’s fine,” Biden said, adding that they should be wearing masks. “That’s the only responsible thing to do. And I don’t know what’s going on at the moment now, but I hope he does that.” 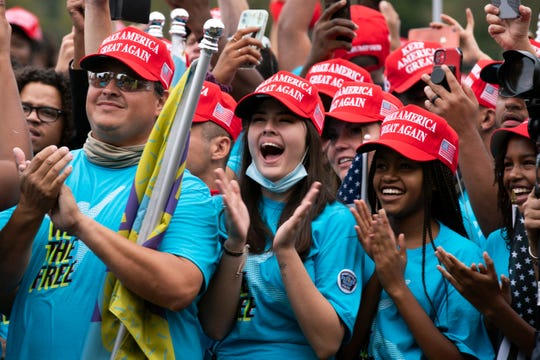 Supporters of President Donald Trump rally at The Ellipse, before entering to The White House, where Trump will hold an event on the South lawn on Saturday, Oct. 10, 2020, in Washington. (Photo: Jose Luis Magana, AP)

Trump’s event come as a New York Times investigation into the president’s tax records found that he engineered a windfall of more than $21 million during his 2016 presidential bid. The report claims that a Las Vegas hotel that he co-owns with casino mogul Phil Ruffin made payments to several companies that Trump controls that eventually flowed to directly to Trump.

“This is yet another politically-motivated hit piece inaccurately smearing a standard business deal,” Deere said in a statement.

“During his years as a successful businessman, Donald Trump was long-time partners with Phil Ruffin and earned whatever payments he received. This is the same 2016 playbook that the American people rejected resoundingly.”

Californians to vote on racial, gender preference programs in Prop 16 –

This Just In: The One and Only WCHL