Former business partner of fake heiress who infiltrated Mar-A-Lago, was shot outside a Québec hotel

Valeriy Tarasenko, 44, was shot outside of the upscale Estérel Resort hotel, in Estérel, Quebec, around 1pm on Friday. He was not a guest of the hotel, which is near the lake and offers various glamorous guest packages starting as high as $305 US dollars.

Tarasenko, a businessman, was romantically involved with Inna Yashchyshyn, 33, who reportedly posed as a fake heiress to the Rothschild fortune to infiltrate Donald Trump’s Mar-a-Lago home.

Tarasenko has ties to Canada and Florida and had met with the FBI to turn over documents revealing his ex-lover’s infiltration and businesses. The documents showed the pair owned two businesses together.

The Friday shooting left with him with serious, but non-life-threatening injuries. Another person involved was left with a serious head wound.

Three people opened fire against three others in the parking lot, before leaving in a black SUV, CBC reported.

Police cars were seen outside the entrance of the upscale hotel. Valeriy Tarasenko, 44, reportedly ran into the reception area after returning to the scene. He was not a guest of the hotel 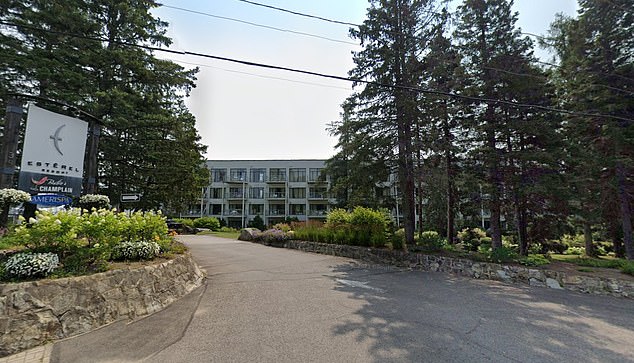 Tarasenko was shot outside of a Estérel Resort hotel, in Estérel, Quebec, around 1pm on Friday. He was not a guest of the hotel 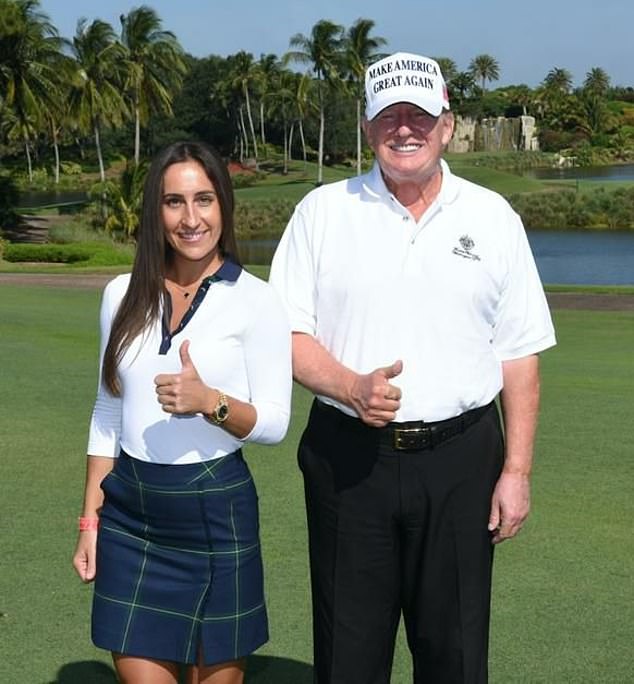 Tarasenko, a businessman, had ties to Inna Yashchyshyn (pictured with Trump), who reportedly posed a fake heiress to the Rothschild fortune to infiltrate Donald Trump’s Mar-a-Lago home 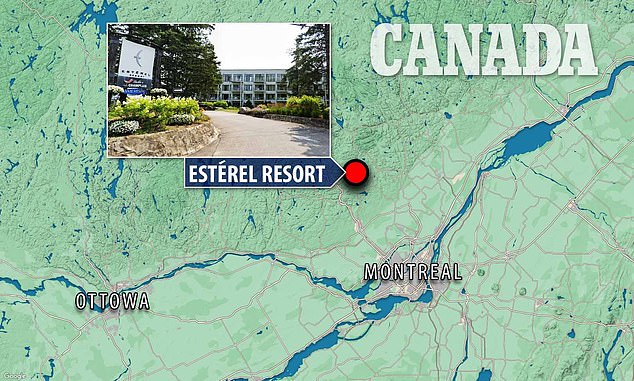 The shooting happened at the Estérel Resort near Montreal and Ottowa

Mayor Frank Pappas believed the attack was targeted and local police are investigating.

‘We are not dealing with someone that was shot randomly,’ Pappas said, citing a preliminary report he got from police.

Pappas also said the surveillance footage shows the victim leaving in a car a few minutes after the attack before returning ‘in a panic.’

‘We see the same individual…running across the street and entering the reception in a panic,’ he told CTV Montreal.

Police have not released much information about the attack, only saying it was an ‘armed assault.’

DailyMail.com has contracted the Mayor’s Office and the hotel for comment.

The Ukrainian-born, Russian-raised victim’s lawyer Steven Veinger said his client was stunned by the shooting.

‘This is just horrible. I just can’t believe this is happening,’ Veinger told the Post Gazette.

He did not say why his client may have been targeted.

Yashchyshyn, 33, made headlines in August after a Pittsburgh newspaper published an expose delving into a murky past which saw her rise from unknown origins to hobnobbing with America’s former president, all while sporting one of history’s wealthiest names.

Since the story broke, Yashchyshyn has been accused of being everything from a Russian spy to a member of an international crime syndicate, and Senate Intelligence Committee Chairman Mark Warner has also called for a probe into how somebody with such a shadowy past could walk into a former president’s home unchecked 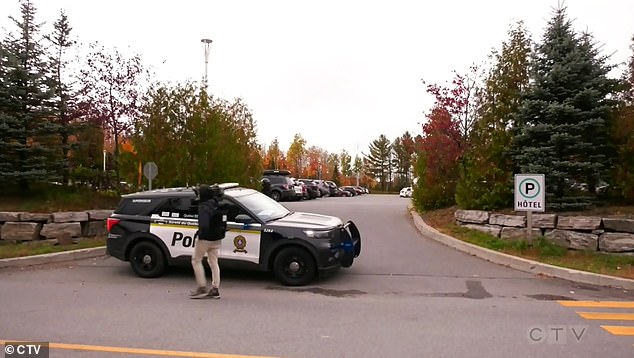 The police have been tightlipped on the shooting, only saying it was ruled an ‘armed assault’

The FBI and Canadian law enforcement have both previously launched investigations into her past and finances, which are ongoing.

But Yashchyshyn – who has passports, driver’s licenses, and other IDs bearing the name Anna de Rothschild – said the entire ruse was forced upon her by her abusive ex-lover, 44-year-old Valeriy Tarasenko, who forced her to don the fake identity and infiltrate high society so he could support his 18-year-old daughter’s music career.

‘I have been a hostage,’ she told the Post Gazette this week, characterizing Tarasenko as a jealous lover who turned manipulative and violent when she tried to leave him.

But Tarasenko insists otherwise, saying Yashchyshyn was a ‘brilliant con artist,’ in a recent interview with the New York Post. He also said the two of them never had any romantic relationship, and that he had only hired her as a nanny for his two daughters around 2014. 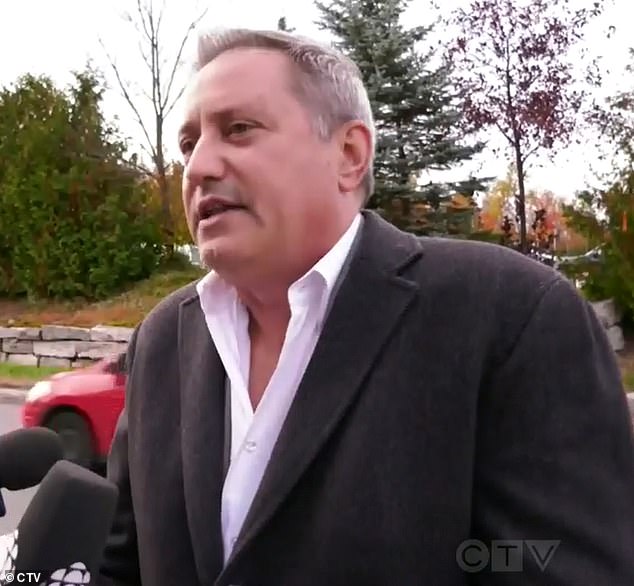 Mayor Frank Pappas believed the attack was targeted and local police are investigating. ‘We are not dealing with someone that was shot randomly,’ he said. Pappas also said the surveillance footage shows the victim leaving in a car a few minutes after the attack before returning ‘in a panic’

Federal agents first got wind of Yashchyshyn last winter after Tarasenko filed a criminal complaint accusing her of assuming the name Anna de Rothschild to ‘gain access’ to politicians ‘including but not limited to Donald Trump, Lindsey Graham, and Eric Greitens,’ the former governor of Missouri.

In an affidavit filed in a Miami-Dade court, Tarasenko wrote Yashchyshyn was ‘an active member of an international criminal organization.’

In the complaint Tarasenko included numerous forms of international IDs bearing Yashchyshyn’s face and the name Anna de Rothschild, including one Florida driver’s license which listed her address as an $18million estate on San Marco Island.

Tarasenko said Rothschild wasn’t Yashchyshyn’s only powerful alias, alleging she routinely assumed others including Anna Kruger – posing as member of the Canadian paper and cardboard fortune family – and Inessa Cavalli, of the $500million Italian fashion empire.

Yashchyshyn vehemently denied the allegations, saying in a Canadian court earlier this year that Tarasenko was a had always threatened her with a legal ‘nightmare’ if she ever left him.

‘If I ran away he will make my life a nightmare by filing fake legal surprises against me,’ she said in court, according to The Post.

Yashchyshyn claimed Tarasenko forced her to assume the fake names, open a number of limited liability companies across Miami and Montreal, and pose as Anna de Rothschild to swindle the powerful out of their riches.

One of those companies was Rothschild Media Label Inc., which Yashchyshyn said was intended to boost the music career of Tarasenko’s 18-year-old daughter, Sofiya, who goes by Sofiya Rothschild online.

‘He felt that if Sofiya changed her last name to Rothschild, she would have a better chance of making it big in America,’ she told The Post. Yashchyshyn added that Sofiya referred to her as ‘her aunt, Anna de Rothschild’ in public.

Sofiya’s Instagram page bears the name Sofiya Rothschild, and features videos promoting her music, and photos of her posing against luxury cars with her face always obscured. Yashchyshyn can be seen alongside Sofiya in at least one photo.

Yashchyshyn also denied – under oath – ever using any fake names or breaking any laws. 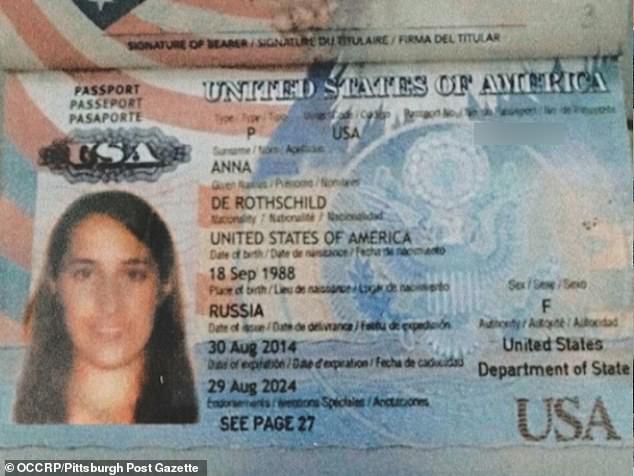 His ex-lover Yashchyshyn was going under the name Rothschild to help get in with high-profile people, like Trump 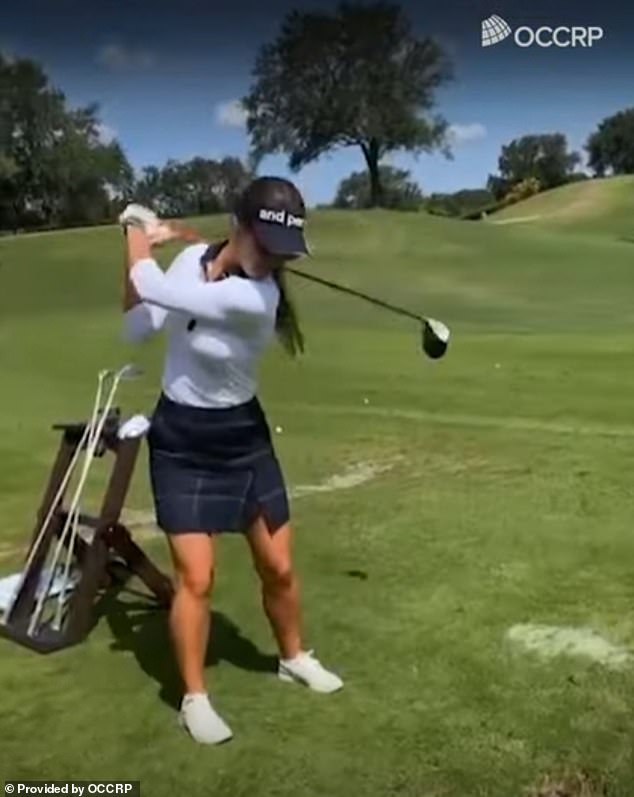 But numerous people who were present when she appeared at Mar-a-Lago in May, 2021, say she was calling herself Anna de Rothschild.

‘Everyone was eating it up,’ said author and former Wallstreet investor John LeFevre, who met Yashchyshyn at Trump’s resort.

LeFevre and other witnesses said Yashchyshyn didn’t just introduce herself as a Rothchild, but discussed plans to open a Formula-1 racetrack in Miami, and opined about days growing up in Monaco. Yashchyshyn was truly raised by a truck driver from Illinois, according to the Post Gazette.

‘It was the near-perfect ruse and she played the part,’ LeFevre told the Post Gazette.

Yashchyshyn, however, told The Post she never used any false names at Mar-a-Lago, and only went there because a friend of Sofiya’s had invited her. She said she stayed from May 1 to May 2, 2021, had lunch, and played a round of golf with a family she met.

It was during that golf session – the same day a $25,000 per-head fundraiser tournament was being held at the resort – she met Trump and the infamous photo was snapped.

‘I didn’t tell anyone my name, and no one asked for identification,’ she told The Post.

Despite her claims, footage from the day obtained by the Post Gazette shows Yashchyshyn teeing off at a Mar-a-Lago driving range while a man calls her Anna and jokes she could afford to pay donate $1million for a photo with Trump.

‘Anna, you’re a Rothschild – you can afford $1million for a picture with you and Trump,’ the man could be heard saying.