HOUSTON — There’s an old Black proverb that goes, “you have to work twice as hard to get half the credit.” If you know or have been around enough of our people for a certain amount of time, you’ve undoubtedly heard the phrase or some variation of it from an auntie, a churchgoer, or your own parents.

It’s one of the first lessons we’re taught as children in America, an encouraging reminder that ultimately, we will not get a fair shake on the whole and you’ve got to be mentally prepared for that. When Houston Astros manager Dusty Baker walked in to talk to the media Saturday night at Minute Maid Park — at 73 years old, the oldest manager to win a World Series — he could still hear those voices talking to him.

“I’ve had some ups and downs, some disappointments, you know? But those disappointments make you stronger or they break you,” said Baker. “After a while, I quit listening to folks telling me what I can’t do. All that does is motivate me more to do it because I know there’s a bunch of people in this country that are told the same thing, and it’s broken a lot of people. But my faith in God and my mom and dad always talking to me made me persevere even more.”

He’s the third Black manager to win a World Series. Let that sink in. For a sport that’s as old as dirt in America, sometimes all we have to celebrate are relics of the pasts, chasing ghosts from a different era to remind ourselves of greatness. The opportunities to celebrate Black achievements in baseball are few and far between, that even just one feels like a crowning victory.

In a climate in which young talented Black men are being cut down left and right for senseless reasons, seeing a brotha of that age being rewarded on the highest stage is humbling. Another reminder that often, the journey is as important as the goal.

“Had this happened years ago, I might not even be here,” Baker explained. “So maybe it wasn’t supposed to happen so that I could hopefully influence a few young men’s lives and their families and a number of people in the country through showing what perseverance and character can do for you in the long run.”

One of the young men whose lives he touched is Ben Somorjai. He grew up with Baker’s son Darren in the Bay Area, playing baseball. His Twitter bio is a photo of the two at 9 years old, wearing little Cincinnati Reds uniforms and sitting in the AT&T Park dugout. There’s another adorable shot of the two in mini Cubs uniforms at Wrigley Field. He’s known Dusty Baker, the human, for pretty much all of his sentient life.

“I’ve known this guy forever. I’ve seen kind of the ups and downs throughout the time from Chicago on to now, and no one deserves it more,” Somorjai explained on the field after the Astros became the first team to win a title in their home park since the 2013 Boston Red Sox. Ben went on to play at Division III Haverford College in Pennsylvania, and still lives in the Philadelphia area, where he also showed up at the park to support Baker.

“I mean, this is such a representation. Look how many people are here with him, who care about him. Just one of the greatest humans on the face of the earth and I couldn’t be happier for the guy.”

“I’m taking leadership inspiration from Dusty in this stuff because it shows that it doesn’t matter how bad things get or what you inherit, if you have conviction and you’re strong and you believe in it, you can do this too. You can create a championship out of the burning embers of failure.”
— Andrew Cooke

As a Black man in my fourth decade of life, it’s hard to describe exactly what’s so motivational about Baker. Saturday night, just seeing him smile and hearing him laugh was something that instilled a certain pride that is just innate to me at this point, based on what the world has taught me.

OG status isn’t some sort of backhanded slight to remind others that there are younger, “cooler” people coming up. It’s a sign of respect that speaks to longevity, excellence and leadership. It’s the feeling inside you that happens when you see a buddy and you both say, “I’m just tryna get like you, my guy,” or whatever it may be.

Freedom, opportunity and achievement just aren’t celebrated that often with us in positions as leaders. A Black man led this country exactly once, and look where it got us. We’re just not used to it happening at the top.

For brothers in Texas, that motivation is immeasurable.

“Today was a very historical day for the African American community,” said Ron Price, who’s on the Board of Regents at historically Black Texas Southern University in Houston. “I’ve already met with my president, my board chairman today, to look at giving Dusty an honorary doctor’s degree from TSU this December, in honor of what he’s accomplished for not just for the Astros, but for the whole athletic community.

“Many say that African Americans don’t participate in baseball. It’s not that baseball [doesn’t] recruit, it’s just that more African American students are pushed toward football and basketball. But with Dusty, maybe we can energize the Black community once again to get involved with baseball, which is something that we need to do here in the United States.” 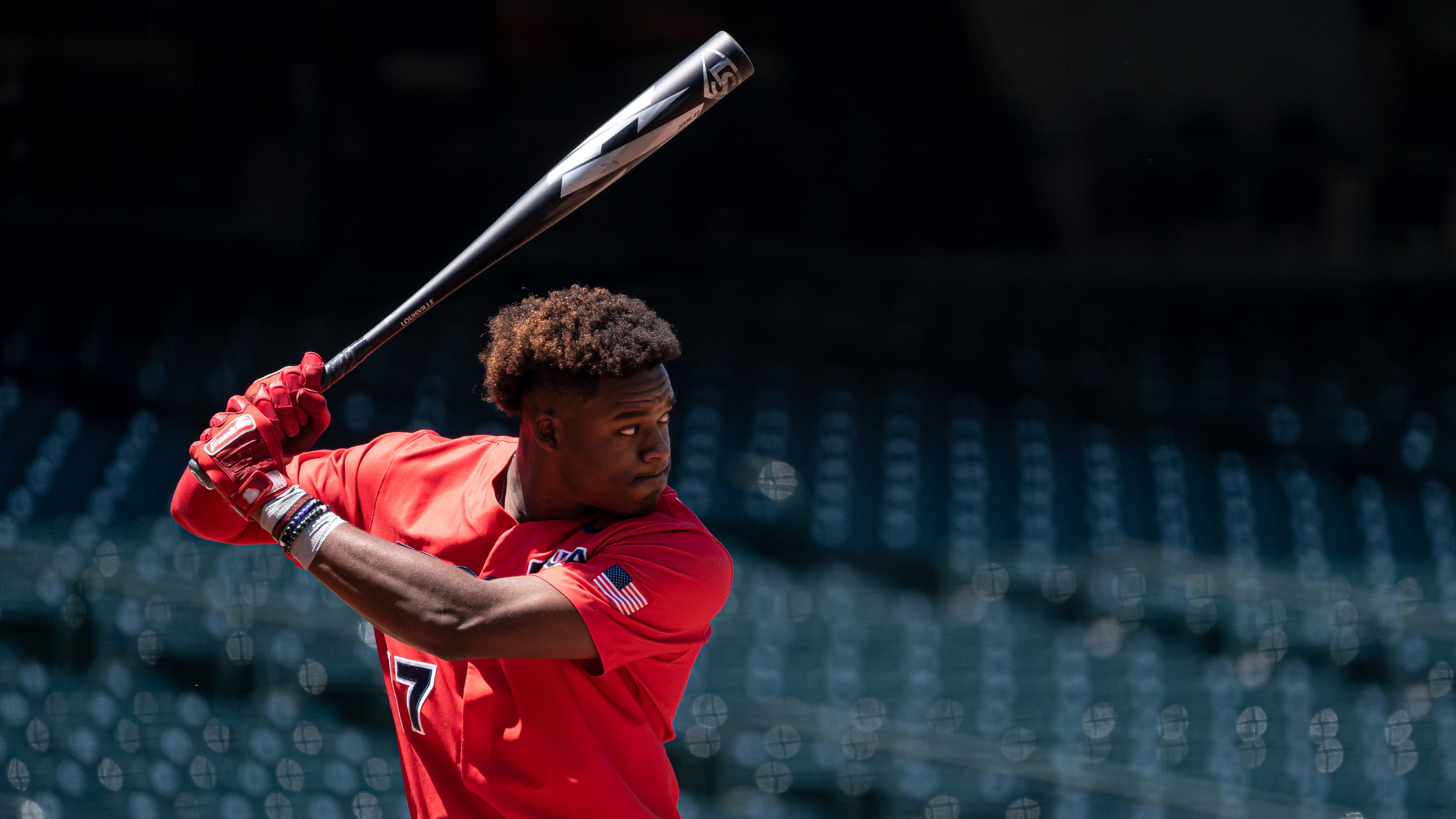 A year ago this time, legendary Geto Boys rapper Scarface was in a hospital bed, battling COVID-19 and kidney failure. The images online of a man of his stature in failing health were tough to look at, another reminder that so many of us don’t get a chance to grow old. But “Face” as he’s known, battled through. His son, Chris, donated a kidney, and Saturday they were both on the field to celebrate with Baker.

“Even as a kid, I spent a lot of time in the Astrodome, man, but never on the field, bro. And this is just beautiful, man. And then Dusty, man, they did it for Dusty, bro,” he said emotionally, taking in the moment while the team celebrated on the stage at second base. “A good dude. A fantastic spirit. Funny as hell. I love Dusty. ​​He got one as a manager, and he got one as a player. And 2,000 wins. I call him 2K. That’s my dog … I can’t wait to see him. I’m trying to hold it together, man.”

When he found him, the result was glorious.

Baker made a lot of Astros fans out of people this postseason. He’s impossible not to root for, even if you do have to hold your nose not to remind yourself of 2017, if you’re still caught up on that. Baker’s story is bigger than the Astros, and emblematic of something larger than baseball.

“It’s not only the fact that he looks like me; I respect him and he’s a role model,” said Andrew Cooke, 54. Cooke lives in New York and his company is based in Houston, so he’s here all the time. His son is named Ryan, after Nolan Ryan, the Astros and MLB legend. This was a very emotional experience for him to be in the park.

“I’m in business. I lead big teams and I’m taking leadership inspiration from Dusty in this stuff because it shows that it doesn’t matter how bad things get or what you inherit, if you have conviction and you’re strong and you believe in it, you can do this too. You can create a championship out of the burning embers of failure.”

Cooke linked with a longtime homey to come to the game together. His friend, Bert Brown, skipped his daughter’s baptism and his aunt’s birthday party to come see Baker. They told him he had to.

“I called my family [and asked], ‘hey, what do you think about this?’ They say, ‘Daddy, go to the game,’ ” Brown recalled with a huge smile. “I’m a kid in a candy store. I grew up H-town, all things H-town we do. And it was just like one of the most amazing things ever in my life. Now I rank it: married to my wife, having kids, World Series. That’s it.”

To see so many Black men smiling and having a great time was worth his effort and his whole family knew it. For one family member in particular, it was as good it gets.

Noah Jackson is the associate head baseball coach at Cal in the Pac-12. One of the few Black coaches in college baseball, he’s Baker’s godson. His father, Sylvester, was the Oakland A’s radio broadcaster back in the 1980s and 1990s.

“It has a lot of feeling to me because honestly this is the 30th anniversary of my dad passing away and he’s [Dusty Baker] been looking after me since I’ve been 11 years old,” Jackson explained. “It’s been a dream come true and I’m just, I’m happy for him. Because he’s been chasing something and when you’ve been chasing something, then [you’re] finally going to catch it, there’s no feeling like it. I think it’s amazing and I think that when you have strong Black men in position of power, especially in baseball, it speaks a lot to the baseball players of tomorrow. And that’s the most important thing. Because to grow this game, you need to see guys in positions of power. And Gary [Pettis, Astros third base coach] and Dusty are great role models for everybody and I’m trying to follow in their footsteps.” 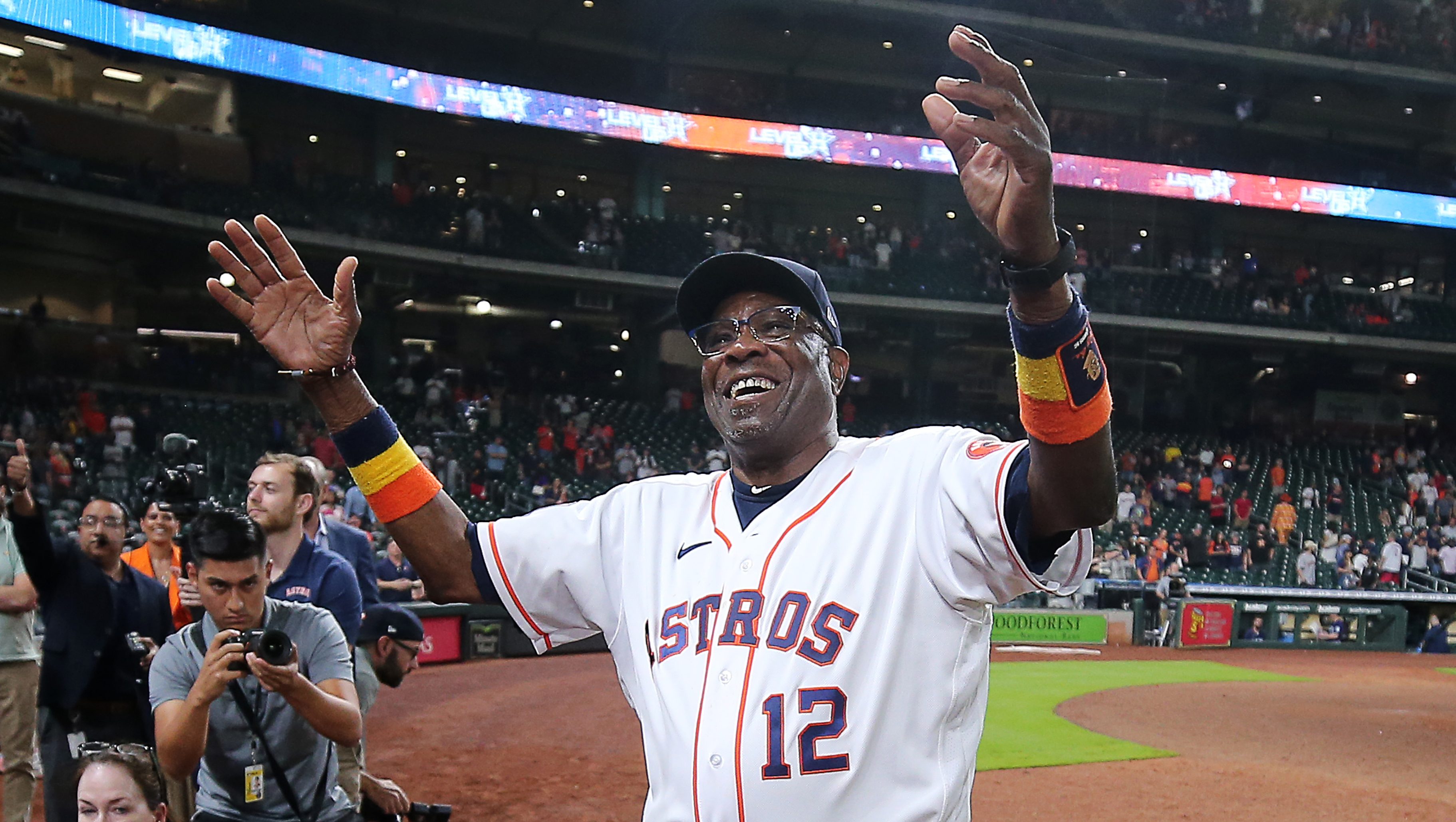 For Dusty Baker, 2,000 wins are a testament to his generational impactRead now

As for Baker himself, the questions will come about whether he’ll hang it up. He’s a lifer of the game, and his son Darren has his own professional career to follow. He’s certainly got plenty of other interests and a world full of friends to go have fun with. But for now, there’s no decision. He’s just glad that after all the years, he’s learned some things about himself, too.

“Well, as you get older it taught me to go home and go to bed. Where when I was much younger, I didn’t, I didn’t like to — I like to hang out a little bit, you know what I mean?” Baker said Saturday. “Since my cancer and then my stroke, it made me appreciate life. It made me take better care of myself. I got two grandchildren now. I got a son [who is], 23. So it’s like you just, you know, it made me want to seize the day and try to be productive every day. And then one thing I hear my dad always telling me, ‘try to do the right thing.’ And sometimes that’s tough. You know what I mean? Because sometimes you want to do the selfish thing. But the right thing, whatever that is in your mind, that’s what I try to do.”

Baker made it home. And the next one with his name in it has an obvious address: Cooperstown, New York.

Clinton Yates is a tastemaker at Andscape. He likes rap, rock, reggae, R&B and remixes — in that order.